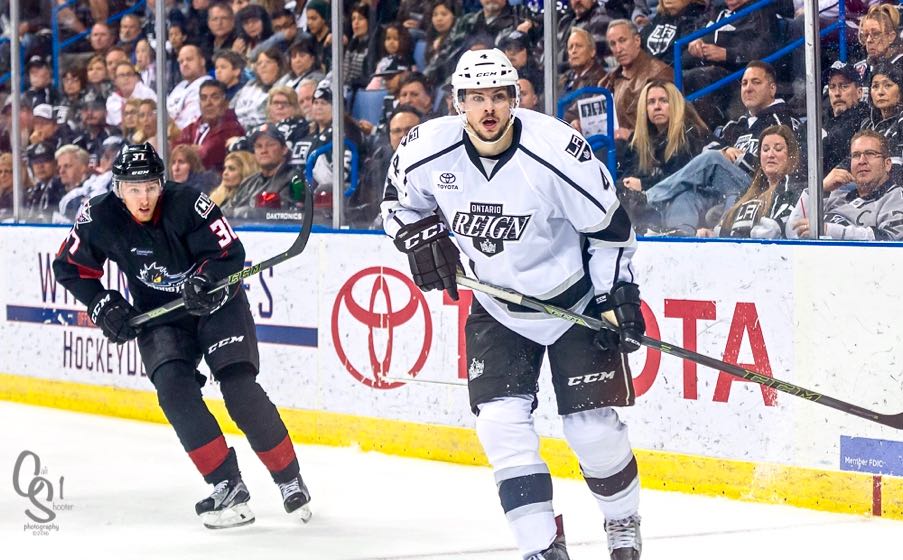 PROSPECT WATCH: Frozen Royalty begins its off-season coverage of the Los Angeles Kings up-and-coming prospects with a look at the backstory that you probably haven’t heard about regarding defenseman Kevin Gravel’s development and ascent through the ranks of the Kings’ system. Features exclusive comments from Kings Director of Amateur Scouting Mark Yanetti.

LOS ANGELES — This past season, Los Angeles Kings defenseman prospect Kevin Gravel played for the Kings’ American Hockey League affiliate, the Ontario Reign, where he showed that he just might have what it takes to be a National Hockey League-caliber defenseman.

In the 2016 Calder Cup Playoffs, Gravel, a left-shot defenseman who was selected by the Kings in the fifth round (148th overall) of the 2010 NHL Entry Draft, played in twelve games, scoring a goal with six assists for seven points, with a +1 plus/minus rating and four penalty minutes.

But even bigger for Gravel, he was able to move up the ladder to become the Kings’ top defenseman prospect, passing older, more experienced players on the depth chart. He even made his NHL debut last season during a brief stint with the Kings and after the season he had with the Reign, Kings President/General Manager Dean Lombardi said that, along with forwards Nic Dowd and Michael Mersch, “They’ve paid their dues and there’s a job for them to win,” next season.

Indeed, Gravel’s rise to being on the cusp of making to the NHL to stay is significant for the Kings. But the backstory on how Gravel has gotten to this point is the real story here.

“Gravel is a guy [amateur scout] Tony [Gasperini] and I identified very early in the USHL,” Yanetti recalled. “There was just something about him. He was a developmental pick. He was so young. Tony and I met him at the same time and we were both instantly intrigued by the player.”

“He wasn’t very physical,” Yanetti added. “He wasn’t a very offensive defenseman. He had tools. He was gigantic [during the game], but when we saw him after the game, he was so physically immature that we couldn’t believe it. As soon as he took his equipment off, he looked like a broomstick. But I thought he was a guy we should focus on.”

Despite the lack of muscle on his frame, Gravel still managed to really catch and hold onto their attention.

“I can remember us talking about him and we said that this was a guy we should target in the fourth or fifth round,” said Yanetti. “So we go into the draft and did our homework. The more we watched him, the more we liked him. We saw such potential for him, and he was so under the radar. We ended up targeting him for the fifth round, and lo and behold, in the fifth round at our pick, he’s the next guy on our list, so we drafted him.”

Yanetti certainly wasn’t understating things when he said that Gravel was under the radar.

“People don’t know this, but he wasn’t invited to the World Junior camp in August [2010],” Yanetti recalled. “But he ended up making the team. So a fifth round pick who was unheralded makes the World Junior team when he doesn’t even get invited to the selection camp. Now we’re looking like geniuses, and now we’re starting to look at the potential of this player. We’re starting to see a guy who, in less than three months, has already surpassed that potential you had allocated for him.”

Gravel played college hockey at St. Cloud State where his development pace slowed to a near stop.

“The first two years he was at St. Cloud, this was a guy who was exciting,” said Yanetti. “But then it happens. He got that success and growth in his first two years, but then he stagnated in his junior and senior years. He didn’t work as hard. He was still a very good player, but he didn’t do the things necessary to continue to improve. He didn’t evolve. He was the same defenseman that he was in his freshman and sophomore years. A slightly better version, but the same. He still had success because he was so good and so smart. But we didn’t offer him an NHL contract.”

At this point, Gravel was an unrestricted free agent who was free to sign with any NHL team, and easily could have. But he decided on a different path.

“I think Kevin was a kid who could’ve gotten an NHL contract with other teams [at the time],” Yanetti stressed. “But Kevin—and this tells you about the kid and where do you hear of this? He could’ve gotten a contract with another NHL club. But what does he do? We had so many talks with him. He signed an American Hockey League deal with us. Who does that? That tells you about the kid.”

“He signed it, and I can remember us, as an organization, saying, ‘you haven’t done enough to get an NHL contract,” Yanetti added. “But if you do A, B and C, if you do this, you’ll earn an NHL contract.’”

This part of the backstory has been reported previously by several sources, including by yours truly here on Frozen Royalty. But Yanetti provided additional details.

“There was no way he was going to earn an NHL contract from us,” Yanetti declared. “No way he was going to be able to achieve the things we put in front of him. But when you look at the kid, and you watch him, you saw that no one told this kid he couldn’t achieve all that. He doesn’t know he can’t.”

“Guys who are signed to AHL contracts don’t earn NHL contracts the next year,” Yanetti added. “How often do you see that happen? Kevin didn’t know this and we didn’t want to tell him, at the time, but he had earned an NHL contract before the [2015 Calder Cup] playoffs began. He earned it, whether it was in February, or whenever. He got it at the end of the year, but he earned it—we were sitting there in January [blown away by his play].”

“This is a kid who turned down the opportunity to become an NHL free agent and look for an NHL contract. He went to a team in Manchester that was stacked on defense, including guys who were drafted ahead of him, and what does he do? He goes there, earns a contract, and does everything he said he was going to do—he said he was going to do it. That’s the other thing, too. The kid said he was going to do it. It wasn’t that he just took the contract and hoped. Then he started working with our development guys. The more he worked with them, the more he wanted to work with them. And what does he do this year? He made his NHL debut.”

If there was ever a success story for a young player no one expected anything from, Gravel’s story could wind up being right up there among the most surprising.

“This is a guy who exceeded expectations early, then I guess you would say, he underachieved and underwhelmed for two years,” said Yanetti. “Then he turned that situation [with the AHL contract]—you know how hard that had to be on him? Nic Dowd and him are best friends, and we’re giving Nic a contract and not him? They came up together. They went through the same development stuff together. If you want to talk about dealing with adversity, this kid dealt with adversity, and look at him now. You could argue that he’s our best defensive prospect.”

“The way he did it, the [short] time in which he did it, and the pride he showed—there was no pouting,” added Yanetti. “Think about that, and then think about the conversation where you’re not going to offer him [an NHL] contract, trying to convince him [to take the AHL deal], and the kid is actually listening to you [as opposed to most young players, who would be far more likely to be totally unreceptive].”

Attitude, character and smarts led Gravel down the road to an NHL contract with the Kings.

“He’s a real intelligent kid,” Yanetti noted. “He was starting to look at the conversation and he thought, ‘they have this development system that I didn’t take advantage of when I was in college.’ He was smart enough to realize that this development system is still there for him and he’s good enough that all he has to do is buy in. Still, that’s a big thing.”

“Now you look at him, he’s on the cusp of being a full-time NHL player,” Yanetti added. “He’s got a Calder Cup Championship that he was a factor in winning. The kid has shown intangibles. He’s shown drive. I think you can tell by how excited I get talking about him. That kid is a story. You just don’t see—those are the type of guys who end up in Europe or the ECHL. Those are the type of guys who find the lowest common denominator of their potential. But here we are, eight months later, he’s on the way to finding the highest cusp of his potential. That’s a cool story.”

“He took ownership of it, and he did that after not taking ownership in his last two years of college. That shows such great strength of character.”

All that adversity should make Gravel that much better going forward, both on the ice and off.

“Without taking the path that he took and dealing with the obstacles that he dealt with, I don’t think—the thing is that most guys aren’t able to overcome those obstacles,” Yanetti observed. “It’s that catch-22. He’s certainly better for it. But the potential to deal with all those different obstacles—it could’ve gone the other way for a kid who has less internal strength and maturity than Kevin.”