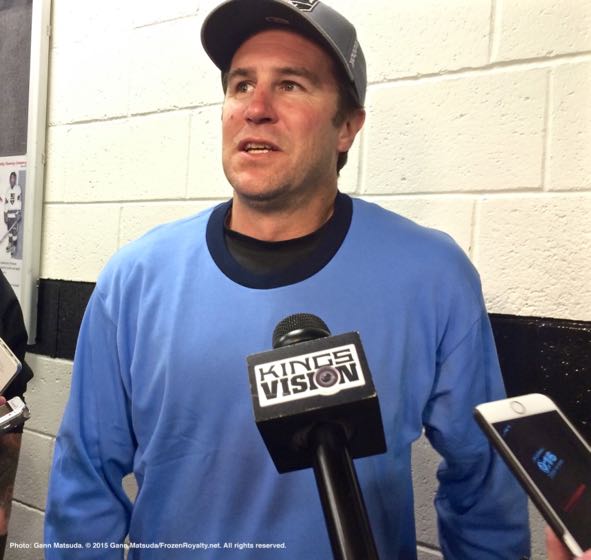 EL SEGUNDO, CA — With the first week of July coming to a close, a lot of National Hockey League Teams are wrapping up their 2016 development camps for their young prospects, while others will start their camps this weekend.

NHL team development camps started nine years ago, with teams running a handful of drills and lots of scrimmages. In fact, NHL development camps were often used as marketing ploys to keep fans tuned in during the off-season and to attract new fans. In fact, many teams turned them into summer spectacles, going so far as to promote the scrimmages quite heavily and even sell tickets to the hyped up practice games—some teams still do this.

The Los Angeles Kings were no exception with their development camps. Early on, they were heavy on the on-ice training and scrimmages, which were hyped up big for their fans.

But those days are a distant memory. In fact, the exact opposite is true for the Kings, who now spend more time in off-ice training and education than they spend on the ice, and although they usually have one scrimmage at the end of their week-long camp, that’s not a given, and there have been instances where no scrimmage was played. Moreover, Kings development camp is no longer mentioned at all by the team, except to make the camp roster available and to let the media know when the one, all-too-brief media session will be—the actual camp schedule is not announced by the team.

To be sure, the Kings’ development camp has changed and evolved rather dramatically since they started holding them back in 2007.

“One thing you have to realize is that we get older every year, but these kids are only 19 and 19 years old,” said Director of Player Development Nelson Emerson. “Times are changing now, with social media, times are changing with the way these kids learn in college and in high school, so we have to adapt, too.”

“The young players now, when you ask them to do something, they want to know why and how, and they want to be shown through video, and things like that, about why it’s going to help them,” added Emerson. “We have to adapt that way.”

Years ago, development camp was as much an evaluation tool as it was to give young prospects a broad set of tools to help them improve. But now, things are much more focused, in terms of on-ice drills, and with much more time spent watching video than on-ice drills.

“We don’t want to be [just] drills where there’s all these guys skating and, one after the other, doing something,” Emerson explained. “What we really want is to slow it down so that the player can leave after the week, go home, and, if he’s a defenseman, [have] three or four concepts that [Senior Adviser/Development Coach] Mike O’Connell wants them to learn. Same for the forwards. We don’t want to throw them all these things and get them confused.”

An example of the heavier emphasis on off-ice learning is how they teach the young players puck possession, a Kings trademark.

“We stress with our young kids, right from day one, that if you want to be a part of this organization, and be effective, you have to learn the staple of [possessing the puck],” Emerson noted. “We make sure that, at a young age of 18, they understand that.”

“One of the easiest ways is to show it on video,” Emerson added. “When we started [having development camps] nine or ten years ago, we were showing other players from other teams. But now, we’ve got the best guys in the world who know how to possess pucks, protect pucks—they’re strong on the walls, and they make the right plays. We show all our own players. It’s easy to watch the video, watch what our guys do here in L.A. We basically tell them you need to be able to do it like this.”

Ontario Reign head coach Mike Stothers and assistant coach Chris Hajt are on hand during development camp, but Emerson and the rest of the Kings development staff run the camp.

“This is the development crew,” said Stothers. “This is their time with the guys. Chris and I are here to support them and just be on the ice to help the development crew do what they do best. As we’re standing on the ice, or participating, we’re just getting to know some of the kids, talk to them. It’s a little bit more of a casual setting. We can have lunch together with the guys. They have their dry land [training], on-ice—it’s a busy time. But because of the environment, the relaxed atmosphere, the fact that it’s not wins and losses that count right now, it’s all about their growth.”

Stothers also stressed the importance of not dumping a ton of new things on the shoulders of young prospects.

“It’s slowed right now,” he noted. “Part of the teaching, absorbing and understanding of it is to go through things [slowly and methodically]. You’ve got to learn to crawl before you learn to walk, and we want these guys to be able to grasp what the organization is all about without rushing it.”

“These kids come in here—they’re nervous and they want to make a good impression,” he added. “Some of the terms—they’re hearing them for the first time ever. Some of the things they’re being asked to do, they’ve never had to apply to the game of hockey, up to this point. It’s part of the process and that the beauty of it. We have the ability to slow things down for them. It’s not a rush. We’re not trying to rush the process.”

“If you watch our team practice towards the latter half of the year, you can pretty much blow the whistle and shout out a name, they know what practice drill we’re doing and they go do it. But you have to get to that point. You have to build up to it. That’s part of it. We’re trying to make them comfortable.”

Prospects also learn what it means to be a player for the Kings.

“It’s just an indoctrination for these guys,” Stothers noted. “It’s exposure, get to know them, put a face to the name, and hopefully, they get to know us a little bit in a little more casual setting.”

“They’re slowly indoctrinated into the fundamentals that are needed to be a pro hockey player and it gives them an idea of what it’s like to be a King, and what it’s like to play in the Kings organization,” Stothers added. “It’s exposure for them here with the organization. For the coaching staff, we don’t get to see these guys play in junior. We don’t get to see them play in college. So it gives us a chance to get familiar with them, and they get familiar with us.”

“You go out, you encourage and you watch. As the week goes on, you become a little bit more familiar with some of the strengths and weaknesses that some of these individuals have to work on.”

Defenseman Kale Clague, who was selected by the Kings in the second round (51st overall) of the 2016 NHL Draft just a couple of weeks ago, was a bit nervous coming into development camp, but indicated that he learned some valuable lessons.

“It’s good, but it’s nerve-wracking,” said the 18-year-old native of Lloydminster, Alberta. “When I got here, coming into it, I didn’t really know anyone, so I was a little bit nervous about that. But I’m starting to get a little more comfortable with the guys. I’m getting to know them and I’m feeling really good on the ice.”

“It’s not much stuff that I haven’t learned,” added Clague. “They stress really detailed, [specific things on defense like] having a good stick, good gaps, and always keeping your head up. I don’t think it’s something I haven’t learned before, but it’s stuff that’s being stressed more than I’m used to and it’s good. It’s going to help me. I’m going to take what they’re showing me this week and use it to get better.”

Another way the Kings development camp has evolved is what they’re teaching their young charges now, compared to years past. Perhaps the most notable example is that they have added drug and alcohol awareness to their training regimen. In fact, a source close to the Kings reported that former NBA player and recovered drug addict Chris Herren (who they’ve brought in for their big club roster in the past) spoke to the prospects during camp.

“The LA Kings feel like we’ve tried to keep up, using video, electronics, social media, nutrition, how they work in the gym, counseling, drug and alcohol awareness,” said Emerson.

“There’s so much going on, even before they get on the ice.”