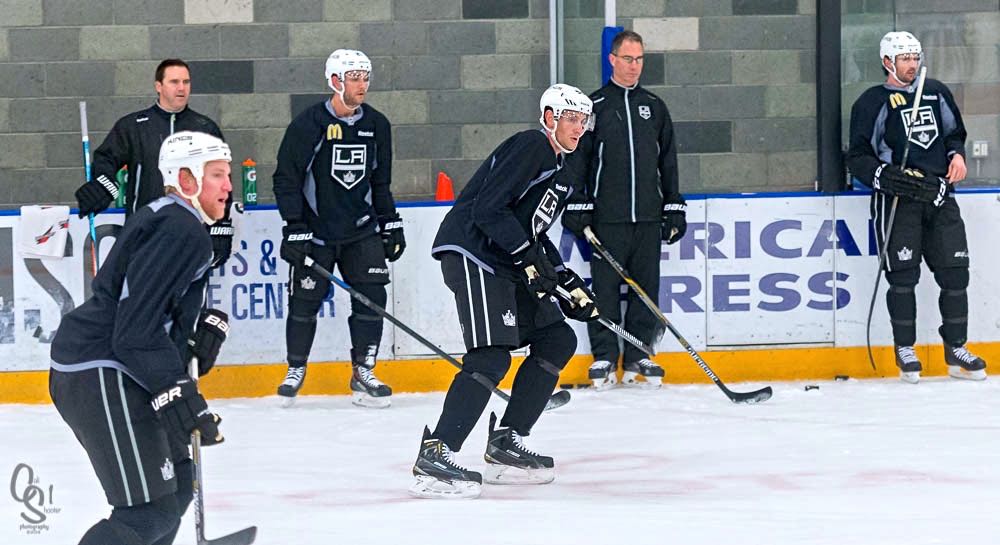 As part of the local media covering the Los Angeles Kings, Frozen Royalty gets a lot of questions about when they (and visiting teams) will be practicing (when the Kings are at home). Here’s a guide to finding out when they will practice along with answers to other related questions. It will also tell you when to ask…

When do the Kings practice next?

What time do the Kings practice tomorrow?

Q: Where do the Kings practice?

Q: Are practices open to the public?

When visiting teams skate at TSPC, those sessions are also open to the public.

The exception would be any practice session held at Staples Center (during the playoffs, the Kings will often hold game-day morning skates there and visiting teams will usually practice there during the playoffs). For obvious reasons, such practices would not be open to the public.

A: YES. There is no charge, UNLESS the practice is part of a special event (see above). This includes visiting team practices.

Q: Where do I park? Is parking free?

A: TSPC has their own parking lot, and parking is free. BE ADVISED, however, that TSPC is a often a busy building. With three ice sheets, TSPC usually has a lot going on. As such, the parking lot can get full, especially when there is a youth hockey tournament happening.

When the lot is full…

On weekdays, exit the TSPC lot and turn RIGHT (southbound) onto Nash Street. Turn right into the next driveway. That’s the Karl Storz building next to TSPC. Drive past the ground floor entrance to the parking structure on your right. At the end of the alleyway, turn right onto the ramp leading to the roof level of the parking structure. You can park there for free. There is a staircase at the northwest corner of the structure leading to TSPC. Be advised that the gate to that staircase will lock, so you’ll probably have to walk all the way around to get back to your car.

On weekdays after 5:00 PM and on weekends, the gate to that same parking structure on the TSPC side should be open. You can park (free) on the ground level of that structure.

Q: How about public transportation?

A: As of this writing, the Los Angeles County Metropolitan Transit Authority (Metro) and Torrance Transit serve TSPC.

Also, Metro’s Trip Planner will tell you how to get from where you are to any destination served by any of the local public transit agencies, not just Metro. Using the trip planner to determine how to get to TSPC from your location is highly recommended.

Q: What if I get hungry?

A: TSPC has the Kings Cove cafe that serves more than just burgers and sandwiches, and the food isn’t bad at all. They also have a full bar. Check their web site for hours of operation and their menu: https://www.toyotasportsperformancecenter.com/kings-cove.

PRO TIP: During the lunch hours on weekdays, there is usually a gourmet food truck parked in the Karl Storz building parking lot on the Grand Avenue side (about one block west of Nash Street). Easy walking distance.

Q: Can I take photographs during practice?

A: YES. Cameras are allowed, including DSLR’s and telephoto/zoom lenses. HOWEVER, you may take photos only from the bleachers, along the glass in front of the bleachers (be sure you’re not blocking anyone’s view) and in front of the northeast corner of the ice (the corner nearest the staircase leading to the upper level).

DO NOT attempt to linger or take photos from the southeast corner, adjacent to the Kings dressing room. Only Kings staff and media are allowed to hang around in that area during practice. TSPC security will ask you to leave the area.

David Sheehan of CaliShooterOne Photography, Frozen Royalty’s primary photographer, has photographed Kings practices at TSPC for several years. He offers some do’s and don’ts, and some tips that should help you take better photos at practice:

Q: What about video?

The answer to the above regarding taking photographs also applies to shooting video.

Q: Can I get autographs?

A: YES. You can often find players heading to their cars in the parking lot after practice (and any meetings or workouts they may have after practice, so be prepared to wait), and the vast majority of players will stop to sign and take photos. However, be sure to remember that:

Q: How do the Kings, generally speaking, handle their practice schedule?

A: Here’s the way the Kings USUALLY do things (subject to change…don’t assume any of these things will happen)…

Q: Do the Kings announce their practice schedule in advance?

Murky enough for you? Now you know how the local media feel!

Generally speaking, the Kings’ Communications staff will notify the local media about the next day’s practice schedule at the following times:

The above is your guide to when to look for the practice schedule for the next day (see below where to find that information). It should also tell you not to bother asking about the schedule beyond the next day—it’s not like the local media will know.

Q: Can you tell us if the next practice is a full skate or an optional one?

A: The coaching staff usually doesn’t tell the Communications staff in advance if a practice is going to be optional or not, so the media doesn’t find out until we arrive at TSPC. In short, no, we can’t tell you.

On rare occasions, practices are sometimes cancelled, or they decide to workout off the ice instead. In those cases, we don’t find out until we get to TSPC, either.

In other words, if you attend a practice, you do so at your own risk.

Q: How do I find out when they are practicing?

A: The best, fastest and most reliable ways are…

NOTE: No matter which one you follow, each gets the practice schedule from the same source, in the same e-mail, at the same time.

From the @LAKings Communications Department...#LAKings
Just when you think that the @NHL couldn't make themselves look like more of a joke...
The league's decision that resulted in the @NYRangers criticizing them was so badly botched by NHL Player Safety that this is just embarrassing for the @NHL.
Based on how he began his @NHL journey back in the summer/fall of 2005 (and even before that, I guess), I knew that @LAKings center @AnzeKopitar was destined for NHL stardom, so it comes as no surprise to this reporter that he has played in 1,000 NHL games and has now scored 1,000 NHL points.
@lakings roster moves today...
From the @NYRangers on Twitter...totally agree. #NHL got this one wrong...they weren't even close.
#LAKings C Prospect Quinton Byfield Is Set To Make His NHL Debut Tonight. Is He Ready? For more, click on thev link in our bio!
#LAKings schedule updates...