Frozen Royalty is published by Gann Matsuda, a native of the Los Angeles area who grew up playing roller hockey in the local schoolyard and has been following the Los Angeles Kings since 1973, when he was still a little kid.

In February 2009, Matsuda became a member of the Professional Hockey Writers Association.

In the 2015-16 season, Matsuda joined the staff of Today’s Slapshot, serving as lead writer covering the Kings into the 2016-17 season, until the site was consolidated with FanRagSports.com. Matsuda has also served as a freelance writer, contributing stories to USA Hockey Magazine.

The view from the press box during the 2014 Stadium Series game featuring the Anaheim Ducks and the Los Angeles Kings on January 25, 2014 at Dodger Stadium in Los Angeles, California.(click above to view larger image). Photo: David Sheehan/FrozenRoyalty.net. 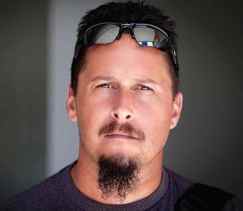 The Los Angeles, California native runs CaliShooterOne Photography. He is Frozen Royalty’s primary photographer and is responsible for the vast majority of the photographs you’ll see on this site.

Some of the more iconic hockey-related events Sheehan has photographed include:

Sheehan was also a contributor on the NHL Network during their pre-game show prior to Game 5 of the 2014 Stanley Cup Final featuring the New York Rangers and the Los Angeles Kings.

Sheehan has also photographed games of the Ontario Fury (indoor soccer) and has been a credentialed photographer for the ECHL’s and AHL’s Ontario Reign (minor league hockey) since the 2011-12 season. His work has also appeared on FoxSportsWest.com and LAKings.com.

Sheehan’s was also privileged to shoot the 2015 Special Olympics in Los Angeles.