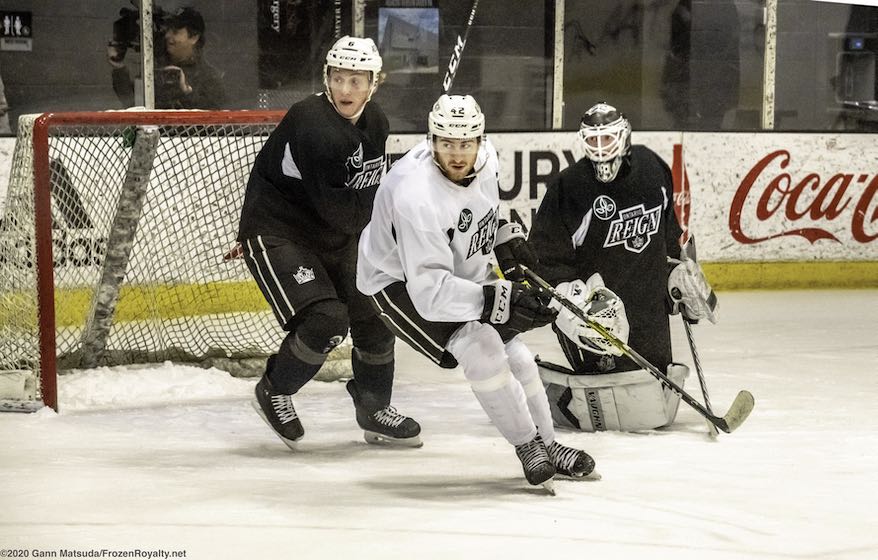 EL SEGUNDO, CA — When we last left Los Angeles Kings center prospect Gabe Vilardi, he had just been assigned to the Ontario Reign of the American Hockey League, the Kings’ minor league affiliate, on November 19, 2019. Indeed, he had finally been cleared to play after suffering a back injury that had sidelined him for the vast majority of the time since he was selected by the Kings in the first round (11th overall) of the 2017 National Hockey League Entry Draft in June 2017.

The 20-year-old. 6-3, 200-pound native of Kingston, Ontario who was rated fourth by most draft rankings in 2017, is finally healthy, and in 20 games with the Reign this season, Vilardi has scored four goals with seven assists for 11 points, with a -8 plus/minus rating and 27 penalty minutes.

Although those numbers aren’t eye-popping, to be sure, the Reign are a very young, inexperienced team that has struggled for most of the season. They are currently ranked fifth in the Pacific Division, 17 points behind division leader Tucson.

But being such a highly-ranked first round pick, expectations were sky high for Vilardi and the anticipation of him becoming a star for the Kings sooner rather than later had fans very excited. To be sure, Vilardi has size, great hands, higher-end playmaking ability and he can score goals.

“The vision, the playmaking ability he has—he doesn’t need much time or space,” said Reign head coach Mike Stothers. “He knows exactly where everybody is and where he wants to move the puck. He’s very creative. You notice that right away. There’s some offensive upside to him.”

But that’s not to say that he doesn’t have some rough edges to his game.

“He’s like every kid coming out of junior, where a lot of the emphasis is on the offense,” Stothers noted. “But now, at this level, you have to know where you need to be in the neutral zone or in the defensive zone. What do you do when we don’t have the puck—stuff like that.”

Indeed, Vilardi still possesses high-end skill and talent. But after a serious back injury, both Vilardi and the Kings are taking their time and aren’t thinking about expectations. Not yet, anyway. That said, Vilardi isn’t exactly thrilled with how things have gone for him this season.

“It’s a lot of ups and downs,” he said. “I don’t want to say that the AHL is a tougher league than I anticipated, because I anticipated that it would be tough, especially after not playing hockey for a while. But I’ve definitely had my struggles, especially as of late. I’m having a tough time scoring goals right now. It’s not just me. It’s the whole team.”

“It’s not my first time playing hockey, but it is the first time I’ve played hockey in a long time,” he added. “I’m working through things and I hope I can start getting on the right side of the score sheet again and help the team.”

Being away from the rink for such a long time is the biggest factor in where Vilardi is, both physically and mentally.

“From my standpoint, I think his season has gone as you might expect,” said Stothers. “He’s missed a lot of hockey. There was a lot of that time where he couldn’t do much of anything, if anything at all.”

“People don’t realize how long it takes to come back when you’ve been, pretty much, sedentary for quite a while, especially with a back injury,” he added. “So there’s still some catching up to do, as far as his conditioning goes, and in terms of getting up to the pace that everyone else is at—they’ve all had full training camps right from the start of the season.”

To put this into perspective, all one has to do is look at how long it took Kings star forward Jeff Carter to finally return to 100 percent after suffering a severed tendon in his left ankle early in October 2017—more than one year.

“It’s essentially like Gabe is coming out of retirement,” Stothers observed. “He probably did less than someone who had recently retired. For example, [former Kings and current Caroline Hurricanes right wing] Justin Williams has recently come back to re-join Carolina from not playing for a while. He’s missed some significant time, and as good a player as he is, it’s going to take him some time to come back. Not knowing what Justin was doing during that time off—I’m sure he was doing something to keep active. Gabe was limited to like…nothing. That’s hard, because it’s so difficult to get into shape, but it’s so easy to lose it.”

Vilardi also pointed to how daunting a challenge that being so far behind in his strength and conditioning really is.

“Finding consistency [has been difficult],” he noted. “I’ll play one or two good games, but then I find that my legs aren’t there in the next one. I don’t know if that means I need to take better care of my body or what. But I’m trying to do the best I can.”

Vilardi also has to do preventative exercises to keep his back healthy.

“He’s got off-ice maintenance exercises that he does to continue to strengthen his back,” said Stothers. “He puts a lot of time into that.”

“I have to keep my core strong to keep everything supporting my spine,” said Vilardi. “I have to stay loose. One thing I learned over the summer about my body is that everything works in unison.”

“Having the history with my back, it’s important that I warm-up, too,” added Vilardi. “Before the injury, I didn’t really do all these things. I just went out and played. The rest of the guys don’t have to do the exercises that I do to make sure that I’m good to go.”

To be sure, Vilardi has physical challenges during his work to return to form. But there’s also the mental side of the equation, which just might be an even greater challenge.

“The positive sign is that his demeanor and morale are much improved,” Stothers noted. “He seems a lot happier now and he seems to be enjoying the game again. I think his earlier frustrations were pretty obvious in his body language. It got to the point where he was probably questioning if he was ever going to play hockey again. But I think we’re beyond that point now. He knows that he’s healthy enough to play.”

“The most important thing to me is just that he seems to be a player, a person, a young man who has a passion to play,” Stothers added. “He’s enjoying himself again and he’s having fun. There are a lot of positives in the way he’s approaching it, the way he’s carrying himself, so I think it’s good for all of us.”

For his part, Vilardi indicated that as his season with the Reign has progressed, he’s learned to look for the positives and relax, rather than get down on himself and get stressed out.

“You have to go through things to learn from them,” he observed. “I missed so much time, I now have a different outlook, not just on hockey, but on life. I’m more chill about things. I’m Just enjoying things. I don’t take everything so seriously.”

“That’s been a big thing for me because at this time last year, I wasn’t playing hockey,” he added. “I got really down on myself. ‘Why is this happening to me? What am I doing?’ Now I’m here. I’m playing hockey and trying to have fun. That’s it.”

As reported earlier, for the time being, it’s not about expectations for Vilardi.

“He’s shown some signs that he is a really, really good player,” said Stothers. “But I haven’t put too many projections or expectations on him because I know it can turn in a moment. Maybe he gets frustrated again because it’s not going as well as he would like. But let’s take it for what it is. He’s still playing catch up.”

“He’s a first round pick, so the expectations are higher,” added Stothers. “But we’re not trying to put too much emphasis on any one thing. We just want him to get his feet wet and continue to feel good.”

But what about Vilardi’s own expectations for himself?

“I’ve always had high expectations for myself,” he said. “This is where I want to be. I’ve wanted to be an NHL player all my life. If you look at where I was this time last year, I was at home on the couch. This year, I’m playing hockey.”

The one thing that is probably still on Vilardi’s mind is the fear of re-injuring his back. Will he play cautiously because that’s in the back of his mind, hindering his play?

“For Gabe, that’s probably always going to be in his mind, if a particular hit or a certain movement is going to be the one [to cause a re-occurrence of his back injury]? We’ve got to help him to not think that way because he’s been cleared to play,” said Stothers. “He’s good to go. If you play like you’re afraid to get hurt, that’s usually when you end up getting hurt.”

“He has to understand that he has to throw caution to the wind, knowing that he’s done everything he can do, in terms of his exercise, his stretching, his strength and conditioning,” added Stothers. “He has to believe that it’s all behind him and that nothing but good things lie ahead.”

Stothers again pointed to the high expectations and anticipation for Vilardi and the Kings, preaching patience.

“There seems to be a push to rush the process,” Stothers noted. “But that seldom works out. You don’t want to have that going on for Gabe after what he’s gone through, so it’s a matter of taking one day at a time. There’s no thinking about where he’s going to be a week from now or a month from now. As long as we see improvement every day, it’ll show up and we’ll know where he’s at.”

“Everyone develops at their own pace,” Stothers added. “In Gabe’s case, he’ll rehab at his own pace. There is a lot to like. But it’s still going to take some time.”

Indeed, the 2019-20 season is one of rehabilitation for Vilardi. But his rehab will continue over the coming summer, which he is already looking forward to.

“There’s a lot of things for this off-season that I’m already looking forward to this summer,” he stressed. “I’ll be healthy and I can’t wait to get to work. I have to work on my skating. That’s the biggest thing.”

One thought on “LA Kings: So What’s Up With That Vilardi Guy?”