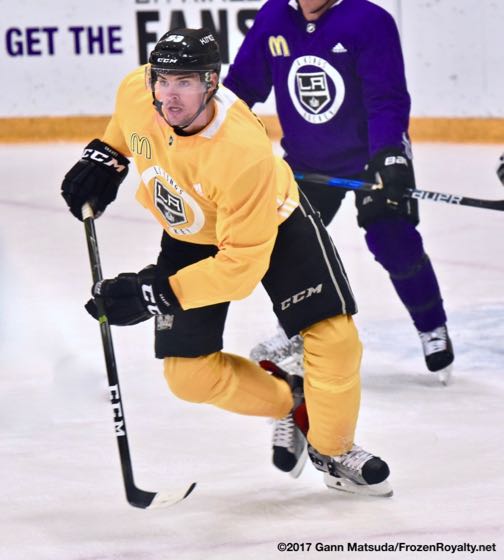 EL SEGUNDO, CA — While the vast majority of his teammates from the 2016-17 Los Angeles Kings were heading to Los Angeles International Airport for their flight to China for pre-season games in Shanghai and Beijing against the Vancouver Canucks on September 21 and 23, respectively, young defenseman Kevin Gravel was skating with a squad comprised mostly of young prospects, many of whom are destined to return to their junior hockey teams in Canada, or for the Ontario Reign of the American Hockey League.

The fact that Gravel was left behind may or may not be significant. Nevertheless, the Kings are looking for more from the 25-year-old, 6-4, 212-pound native of Kingsford, Michigan, who was selected by the Kings in the fifth round (148th overall) of the 2010 National Hockey League Entry Draft.

“Kevin was in a position last year to get some experience in the league,” said head coach John Stevens. “I think there were some inconsistencies in his game.”

“We’ve yet to see the consistency in his game that’ll tell us exactly who he is, as a player,” added Stevens. “But we’re still pretty optimistic that he’ll be a pretty good player, and he’s another guy who can play either the left or right side. That’s a pretty valuable guy to have.”

When asked about his first year in the NHL last season, Gravel pointed to exactly what Stevens mentioned: consistency, or a lack thereof.

“I had my ups and downs last season [in terms of developing consistency],” he lamented. “It’s tough. You try not to let it snowball on you when you have a bad game.”

“As the year goes on, you get more comfortable with everything—on ice, off ice, and you just try to grow, as a player,” he added. “You try to build confidence, game-by-game, and I think the big thing for any young guy, what you need to [develop] is consistency. That’s what makes you an every night player, when the coaches know what they’re going to get every time they throw you over the boards. That’s something I was working on last year, and it’s something that takes a little time. But having some experience from last year will help, coming into camp this year, and shooting for a spot on the team.”

Indeed, Gravel must become a more consistent player if he wants to establish himself in the NHL, and he knows it.

“You deal with [earning trust] at every level,” he noted. “In college, you have to earn the trust [of the coaching staff]. In the [AHL], you have to earn the trust. It’s the same thing here, where you’re with the best players in the world, so for some guys, the transition is easier than it is for others. But I’m working on [developing] consistency every day. You’re constantly working on it. You work on it in practice and by never taking a shift off.”

To develop consistency, Gravel has to improve in key aspects of the game.

“Something I’m still working on is finishing plays in the corners, getting the puck back, and moving it to our forwards, so we can get out of our zone and work in the offensive zone,” he said. “This past summer, I worked on getting stronger, my technique down low, everything—all the things I need to get better at.”

“I really want to continue to work on those down low plays because the guys are so good with guys on their back, or at making plays under your stick,” he added. “The quicker you can break up those plays and get the puck moving the other way, the more you’ll play and the better your team will be. That’s the goal.”

Despite his size, adding strength is also something he’s focused on.

“The strength of the forwards down low, how good they are at keeping you on their back, and making plays with someone on their back, that’s something different from the AHL,” he reiterated. “Guys are so much stronger, and so much better at making plays under pressure, so I need to get stronger to be better in those situations.”

Although Gravel has things he needs to focus on in order to improve, as Stevens alluded to earlier, the Kings are very high on him.

“He’s a kid who’s a really good athlete,” said Stevens. “He just needs to get stronger, but he’s another kid who we’re confident with the upside that he has. He’s kind of a blend. He defends well, he’s got a good stick, he gets to pucks quickly, he’s got good mobility, and good puck skills.”

“I have to come in here and make the team out of camp, and that comes with taking the next step,” he said. “I just need to play my game, and work on the things that I need to get better at.”