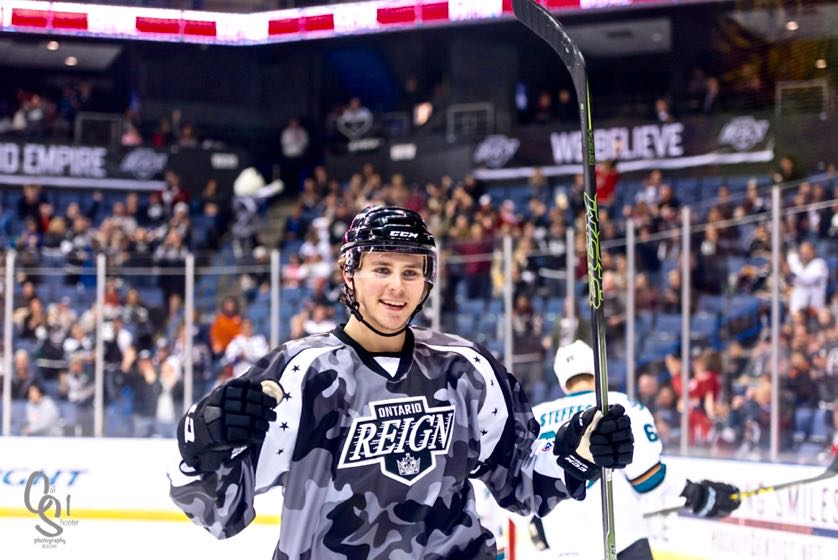 LOS ANGELES — As previously reported in Part 1 of this story on June 16, moving their American Hockey League affiliate more than 3,000 miles from Manchester, New Hampshire to Ontario, California was a great success in many ways for the Los Angeles Kings.

But more specifically, about one year later, it is clear that the greatest, most positive impact for them has been how the move west has affected the development of their young prospects—preparing them to become National Hockey League players.

“This year, at least from our organization’s [viewpoint], it definitely showed why there’s importance in [having their AHL affiliate close by],” said Kings assistant general manager Rob Blake, who also serves as general manager of the Reign. “First and foremost, it was the attraction—fan support. They’re terrific. You go into Ontario or down to San Diego and you see the excitement because of the attachment to the local NHL team and the proximity. I think we understood that, based on the Ontario Reign’s previous seasons that that would be there.”

Being an just an hour’s drive away, or more often, two or three with traffic, proved to be a huge advantage.

“The proximity to the Kings is what worked the best,” said Reign President Darren Abbott. “The development staff was at every game. Rob Blake was at almost every game. They had more hands-on with the players. As for call-ups, they were able to recall guys and have them playing on the same night.”

“The biggest thing for the organization was the presence,” said Blake. “There was a presence (Kings development staff and other hockey operations staff) at the majority of practices and games throughout the season, where we might not have always had in Manchester, simply because of proximity. For the development staff, assistant coaches, or management, being able to go down there, whether it was meetings with players, watching practice or watching games, we always had a presence around them.”

Closer proximity allowed the Kings to keep much closer tabs on their young prospects.

“With our development staff, we’re heavily into monitoring our players, talking to our players. helping them make the right decisions going forward,” Blake noted. “Our staff could drive down in the morning, participate in practice, watch practice, or meet with players, and then be back here, doing the same thing with our NHL club in the afternoon. That could never have happened had we been set up in Manchester.”

“The availability on a daily basis [was key]. Our development staff—we have Glen Murray, Nelson Emerson, Sean O’Donnell—I’d say that at least on a weekly basis, we were out in Ontario. In Manchester, we had to save video clips [for prospects] and it would probably be a month before you saw them again and reviewed them with the player. Now that happens right after. That happens much more often in Ontario.”

The move west also made medical care much easier.

“Outside of the player recalls and the monitoring—the other thing was the health care part of it,” Blake observed. “We have a few guys every year who need surgery, MRI’s or x-rays, or they have injuries that require different kinds of remedies. We’re able to bring them into our staff here who we’ve had relationships with for more than twenty years.”

“We were able to get players in to see our doctors, consult our physicians, or our medical staff here in L.A,” Blake added. “We would do that in the past, but it would be a five or six-day process before we could get it set up, because of the travel and other things in New Hampshire. Being able to drive in here in the morning to our doctors was beneficial.”

But not everything worked out quite so well.

“Travel was a [challenge], with the buses,” said Blake. “Manchester’s travel was a little more convenient throughout the season, with teams being closer. Now, when you’re driving back from San Jose, it’s a five or six-hour bus ride, and it’s about getting the proper buses with the staff who are able to drive after a certain time at night. Some bus [operators] in California don’t travel after 2:00 AM. We couldn’t get home from San Jose doing that, so we had to switch a few things around.”

The most glaring issue for the Reign, both in their inaugural season and for the foreseeable future, is finding practice ice.

“We have to solve the challenge of practice ice a little bit better and that something we’ll be looking at in the next few years,” Abbott noted. “Our building is busier than what we’re used to and we had a pretty good relationship with college rinks in New Hampshire that were empty most of the day, so it was never an issue.”

“We had to come out here and find places to practice, from time to time,” Abbott added. “A lot of times, we had to switch to a practice rink that wasn’t very convenient. There’s not as many ice sheets in the Inland Empire as there are in New Hampshire, so there were some challenges for them.”

“But that’s a work-in-progress. That’s probably some months away, if not years away. But that’s something that’s in the front of mind, in terms of making sure our players get enough practice time. Part of the reason we played 68 games this year instead of 76 was [that we wanted] more practice time. That’s very, very important to Rob and [Kings President/General Manager] Dean [Lombardi].”

Fixing that issue could mean a buying an existing ice rink, developing relationships with existing rinks, or building their own facility.

“There’s been a long-term look at fixing that, whether it be [the construction] of a practice rink, or something in that area,” Blake noted.

“We haven’t narrowed in on anything yet, but we have to find a place where we have some priority on the ice,” said Abbott. “There are some ice arenas out here, but [last season] we got out here so late and we got our schedule so late that we didn’t have those relationships yet. That may be able to work itself out without building or buying a [rink], but having said that, I know one thing that [Kings Chief Operating Officer] Kelly Cheeseman and [Kings President/Business Operations] Luc [Robitaille] are working on is growing the sport in Southern California, and part of that is the [ice rink] piece, so if they’re thinking about building or buying [rinks], I would think that they’d look out here, as well.”

The demand for ice in the Inland Empire is certainly there.

“If you watch the expansion of youth hockey, and I’ve been able to see it, not only in Ontario and L.A., but with my own kids,” said Blake. “Where these kids are driving in from—they’re all driving in from out there to play the Jr. Kings or the Jr. Ducks, so I do think there’s enough response where we’d be able to fill [a new rink].”

“The Kings have their high school hockey league, and they’re getting girls and women’s hockey going,” Abbott added. “I think there’s a lot of synergy, and I think that’s where we’re going. But there’s nothing definitive in the pipe.”

“Look at [the Toyota Sports Center in El Segundo, California, the Kings’ practice facility]. It’s been a rousing success, and if you speak to Luc and Kelly, that’s what they’re thinking—expanding that model.”