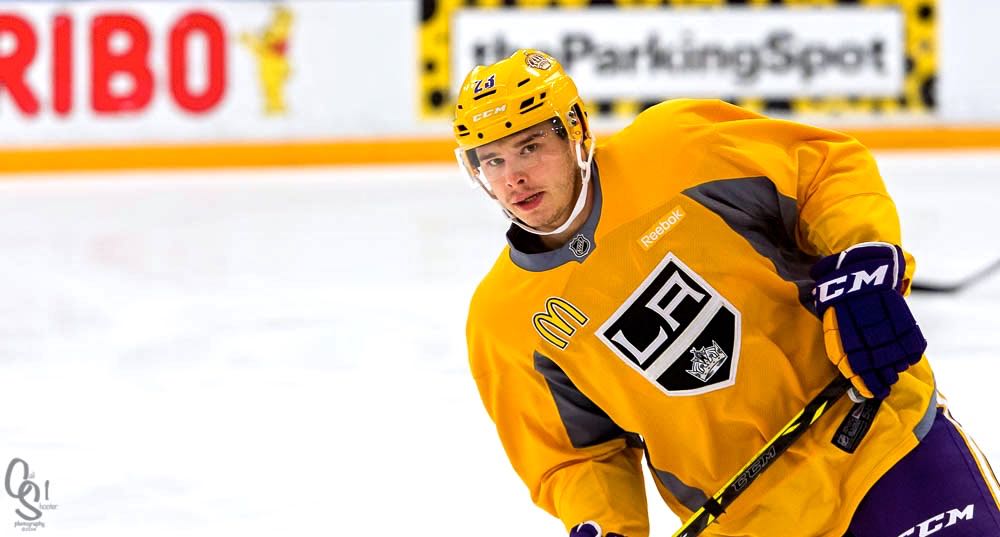 EL SEGUNDO, CA — Right after the National Hockey League All-Star break in late January, Frozen Royalty reported that, based on projections at the time, the Los Angeles Kings would likely need to reach the 96 or 97-point mark to secure third place in the Pacific Division, or 93 points to qualify for one of the wild card spots in the Western Conference playoff race—that’s a winning (points) percentage in their remaining games of .586 for the wild card spot and .583 for third place.

In case those numbers don’t stand out, let me clear things up: the Kings have earned an 11-6-1 record since the All-Star break, earning 23 out of a possible 36 points, good for a .639 winning percentage, exceeding what was projected that they had to do.

Looking at those numbers, one might think the Kings would be secure in a playoff spot. However, their position in the standings has not changed much since the All-Star break—they remain on the outside looking in, but just barely.

As it turns out, the late January projection appears to be holding up about six weeks later.

After updating projections for the Western Conference (assuming that other teams will continue to play at their current pace, a technique that, even though things will likely change, has been quite accurate over the years), it still looks like the Kings will need 97 points to secure a playoff berth in the Western Conference.

In other words, most teams that were in the playoff picture in late January are not only still in the playoff hunt, but they’ve been keeping pace or exceeding what they were doing at the All-Star break.

As such, the Kings have little margin for error the rest of the way—in order to earn the 22 points they need in their remaining 17 games, they’ll need to win eleven of those games (or the equivalent), good for a winning percentage of .647.

Indeed, the Kings need to earn nearly 65 percent of the remaining points in the standings the rest of the way, a more than formidable task.

“Given the situation we’re in, we have to get better, so I think, as a whole, this group, over the years, has proven that when we need to play really well, we can,” said forward Dustin Brown. “Unfortunately, we need to figure out a way to not put ourselves in these situations. But we’ve been tested time and time again. Down the stretch, we need to push our game to another level if we want to get into the playoffs.”

“I think we all understood what we needed to do to be where we are, even though we’re not where we want to be,” added Brown. “Fortunately, this league moves pretty quick, so you don’t really look at what you’ve done. You’re always looking at what you need to do, and I think that’s a good thing.”

Even though the Kings lost in overtime to the Pittsburgh Penguins, 1-0, on March 7 at Staples Center, it was exactly the kind of game they need to play if they want an invitation to the post-season party.

“I think that’s more the type of game we want to play,” Brown emphasized. “Obviously, we need to score goals, but we had really good chances. I think [Penguins goaltender Marc-André] Fleury played really well for them. I think we limited their chances pretty well, especially considering how many power plays they had. That’s more of the game we need to play.”

Brown indicated that even though they got shutout by the Penguins, offense is not the problem.

“If we could score four goals in every game—it’s not an easy league to score goals in,” he said. “It takes hard work and commitment to doing things right. But [their 1-0 overtime loss to the Penguins] was a good example. We have to bear down on our chances, if anything.”

“Individually and collectively, there’s more concern on the offensive side of the game when we lose, 1-0, and don’t have [enough scoring] chances,” he added. “We’re generating good chances. It’s just a matter of bearing down.”

“There’s a big difference between not scoring and not having a chance.”

Brown emphasized that the biggest reason the Kings have turned things around since the All-Star break has been their vastly improved defensive zone play.

“The difference in the last 14 or 15 games is how we’ve taken care of our own zone,” Brown stressed. “We lose a game, 1-0, and obviously, scoring was an issue. But we didn’t give up much. I think our success, lately, has been because we’ve protected our zone really well.”

“There’s not too many games where we won’t score goals, so we’ve got to continue to take care of our end,” Brown added. “That’s going to be the key down the stretch.”

The Kings do have one ace up their collective sleeves for the final stretch drive.

“The good thing about how it all plays out now with the new divisional stuff is that we still play these teams that are right ahead of us,” Brown noted.

2 thoughts on “What’s It Going To Take For The LA Kings To Make The Playoffs – By The Numbers: March 9, 2015 Edition”