LOS ANGELES — While the attention of just about everyone in the building was focused on what was happening on the ice, another important event was happening just off of it.

Just prior to them helping bring the banner onto the ice, former Kings superstars Marcel Dionne and Rogie Vachon were presented with Stanley Cup rings by Kings Governor Tim Leiweke, and Kings President/Business Operations Luc Robitaille.

Leiweke gave the ring to Dionne, but he did not just hand it to him and shake his hand.

“He says, ‘here it is,’” Dionne told the Niagara Falls Review. “He got down on his knees. He said, ‘Thank you, Marcel. It’s well deserved.’”

“It never crossed my mind,” Dionne added. “They hand out rings to staff, doctors…[but] they didn’t play. It’s about legacy, no doubt about that.”

“This is the closing chapter in my hockey life.”

While Dionne was interviewed about receiving the ring, there has been nothing in the media about Vachon’s reaction to receiving the Stanley Cup ring…

“Just before we went out on the ice with the banner, Luc Robitaille and Tim gave me a box,” said Vachon, 67. “I’m just sitting there [in the ‘Zamboni’ tunnel at Staples Center], waiting for the whole thing to happen, and I open the box, and there’s a ring in there.”

“I had absolutely no idea, no clue, that it was coming,” added Vachon. “It was just incredible.”

“They said, ‘we’re glad you’re part of it,’ something like that. I don’t remember [the exact] words that were said, but it was pretty cool just to be part of it.”

Like Dionne, Vachon said that Leiweke and Robitaille were honoring them for helping pave the way.

“We had the most points [in one season] in Kings history [in 1974-75], with 105 (still a franchise record),” Vachon added. “Even though we didn’t win the Cup, they were saying [that we] deserve to be part of [all this], which is incredible. I didn’t expect it. It was phenomenal.”

“Now that they’ve won the Cup, they’re saying, ‘let’s go back [and look] at our history, look at how we got there, and why we didn’t win the Cup before,’ which is really great. Even at the ownership level, Mr. [Philip] Anschutz thought, ‘let’s get these guys a ring. They deserve it because of what they did in the past,’ which is incredible.” 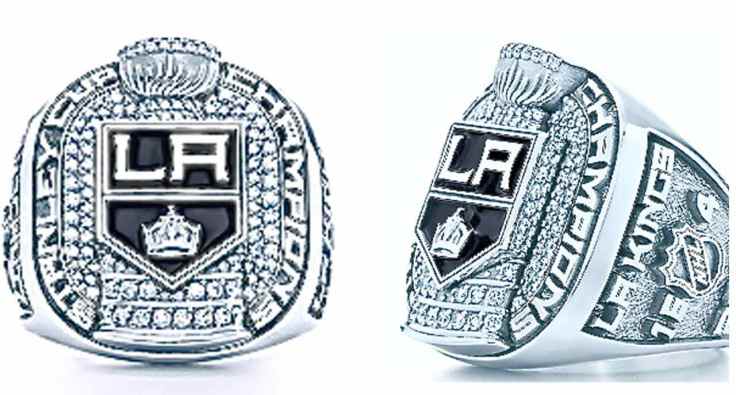 As noted earlier, Dionne and Vachon helped carry the 2012 Stanley Cup Championship banner onto the ice before it was raised to the rafters.

“[That] was really exciting, even for us, because we’re sort of pioneers for the Kings,” said Vachon. “We worked really hard to try to make this franchise better, and finally, one team came in [last] year and did it. I’m very proud of the guys who did it.”

“It was really a proud moment for me, and Marcel, and for the Kings, and all the fans,” added Vachon. “It’s the first time in 45 years, so it was absolutely phenomenal, and I was very proud to be a small part of it.”

A Vezina Trophy recipient (shared with teammate Gump Worsley) and a three-time Stanley Cup winner with the Montreal Canadiens before being traded to the Kings, the ceremony brought back some great memories for Vachon.

“It’s hard to describe,” Vachon said about what it feels like to win the Stanley Cup. “You almost have to go through it to realize how big [a moment] it is, and how important it is. I went through both. I won the Cup with the Montreal Canadiens, and also won the Canada Cup in 1976.”

With a 1.39 goals-against average, a .963 save percentage, and two shutouts in seven games, Vachon was the Best Goaltender of the 1976 Canada Cup tournament, and the Most Valuable Player for Canada.

“It reminded me of the old days,” he noted. “When I was in Montreal, we won three Stanley Cups. If they can win another Cup this year, it’s going to be even better than the first one.”