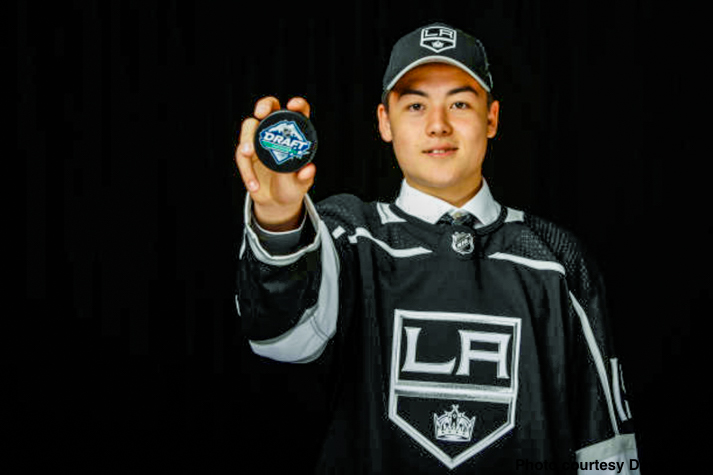 LOS ANGELES — For defenseman Jordan Spence, who was selected by the Los Angeles Kings in the fourth round (95th overall) of the 2019 NHL Draft, the Kings 2021 Development Camp is not his first development camp. But that doesn’t mean that he gets to skip the fundamentals.

“We’re learning a lot about positioning and doing the right things on the ice—doing the things we have to do in the defensive zone,” he said. “[Former Kings defensemen] Sean O’Donnell and Matt Greene have been doing really well with the [defensemen]. It’s really good to learn—it’s the basics. That goes a long way once you get to the next level.”

In the last two years since he was drafted, Spence played for the Moncton Wildcats before a mid-season trade last year to the Val d’Or Foreurs—both teams are in the Quebec Major Junior Hockey League. He also represented Canada in the 2021 World Junior Championships. But that experience was not the experience he, or the Kings, hoped for.

“The World Junior experience was incredible,” he said. But It was an honor to be a part of that team. I only played two games, and my confidence might’ve [decreased]. But I think I saw it in a different way…knowing my role for that tournament.”

“After the World Juniors, I went back to my former team, and I played my own game after that.”

Although he could conceivably play an overage year in the QMJHL, at age 20, Spence otherwise has no remaining junior eligibility, and is very likely to play with the Ontario Reign of the American Hockey League this season.

“It’s [nerves and excitement at the same time, as I begin my pro career],” he noted. “Playing in the AHL this year, I just don’t want to change my game. I have to adapt to the game. If there’s [something the coaches] tell me to do, obviously, I’ll change it and adapt to it as the season goes on.”

Spence indicated that his game has taken a step forward since he was drafted.

“There’s still things to work on, [on and off the ice],” he added. “I’m just really looking forward to the future.”

“With my offensive game, the Kings just want me to play as I am right now. They really want me to work on my defensive game, as well. In order to be a good player and to be an impact player on any team, I have to defend well. [That will help me] become a better player.”