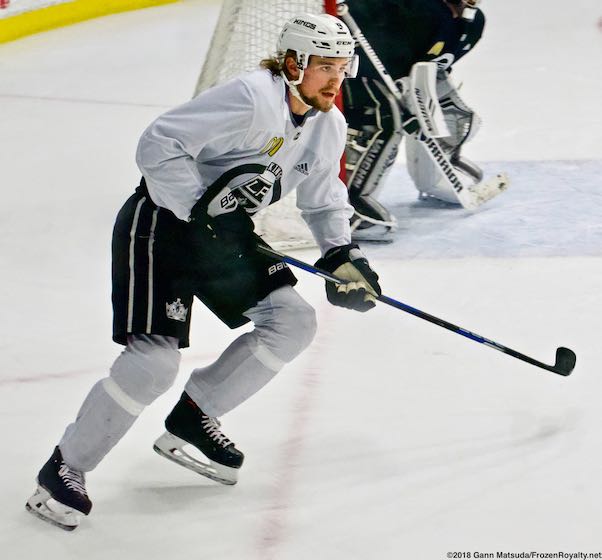 EL SEGUNDO, CA — It is easy to see why the Los Angeles Kings have put so much time and energy into trying to convert forward Adrian Kempe from left wing to center.

Indeed, Kempe’s skating ability and speed, not to mention the fact that he has the rare gift of being able to skate at top speed with or without the puck—most players have to slow down a bit when they carry the puck compared to when they don’t. Add to that his raw skill, size, and strength, and you can almost see “center” written all over him.

But one thing is missing, and it’s rather glaring…

…Kempe cannot be relied upon to win a face-off, as his 41.1 percent face-off winning percentage this season indicates.

Kempe has scored just three goals in 23 games this season—he has struggled to score goals, something that hasn’t been a new thing for him since he reached the professional level in North America. But perhaps there is some daylight on the horizon, as he has shown rather noticeable improvement since moving to left wing in recent games.

“Playing [left] wing lately—I can be more effective there,” he said. “I’ve always been a winger. But when I got over here, they started playing me at center.”

“It feels good to be back on the wing,” he added. “I can be more effective on the forecheck, playing as a winger. I can get in on the forecheck and create turnovers. I get confidence from that, as well.”

Head coach Todd McLellan has noticed the improvement, too.

“He has looked better [over] the last couple of weeks on the wing,” he said about Kempe. “He has a lot of tools that a really good centerman would possess.”

“I think, sometimes, when you find your game and you get a little confident, you can probably play any position, and he’s arriving at that point now,” he added. “I’m sure if we put him on the blue line, he’d might even say, ‘I feel good there right now.’ It’s a lot about being comfortable, confident, feeling good about yourself, doing things right, and he’s done that the last few weeks, so he’s earned the right to feel good no matter where he lines up.”

Kempe’s improved play and effectiveness after moving to left wing has earned him greater trust from the coaching staff. Evidence of that came on November 14, with the Kings looking up at a 2-1 deficit against the Detroit Red Wings at Staples Center. Kempe was on the ice in the final moments of the third period as the extra attacker and he scored the tying goal that sent the game into overtime.

“That was the tying goal, an important goal,” he noted. “I had some chances earlier in that game, too. I was a little frustrated, so it was nice to get one late in that game to tie it up and we won in overtime.”

Kempe has also seen more time on the power play in recent games.

“On the power play, I’m playing with some really good players, so I want to be as good as possible and help them to score,” he said. “We were pretty good in the last game—we finally got [a power play goal] in the last game. That was a big goal for the team.”

“[The coaches have] always trusted me,” he added. “They like my game. But it’s up to me to take advantage of the chances I get.”

For the record, the goal Kempe referred to was scored at even strength, just two seconds after a minor penalty for hooking to San Jose Sharks left wing Marcus Sorenson expired—he was still out of the play when Kempe scored.

Kempe noted that even though he hasn’t scored as many goals as he, or the team, would like, things are trending in the right direction for him.

“I think I’ve created a lot of chances the entire season, so far,” he said. “The puck hasn’t gone in as much as I’ve wanted it to. But lately, it’s been pretty good. I keep getting chances and that’s what I’m here for. Obviously, I’ve got to put some of them in the net. But especially over the last couple of games, it’s been getting better.”

“When you score goals and put up points, you gain confidence. But as long as I keep creating chances, I’m not going to worry too much. I just need to build on the last couple of games.”