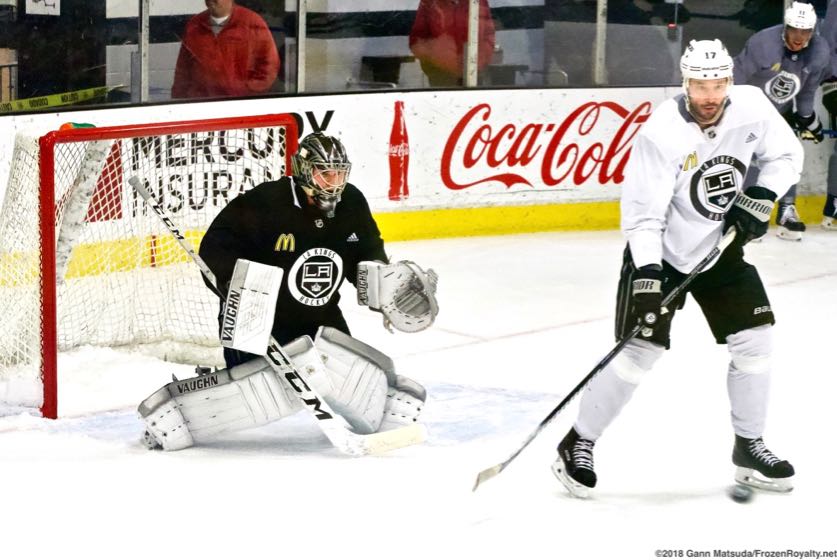 EL SEGUNDO, CA — Backup goaltender Jack Campbell resumed practice with the Los Angeles Kings on December 17, his first full practice with the team since he suffered a torn meniscus in his knee in a 1-0 loss to the Calgary Flames on November 11.

“[It] felt good to be with the boys,” he said. “I missed it. It was fun. It was my first full practice with the boys, but I took shots with [injured left wing Kyle Clifford] the other day. It was good, but it’s different than it is with all the guys coming at you, so it was good to get back out there.”

“The knee is fine,” he added. “It feels pretty good. It felt all right [today]. Hopefully, in the next day or two, it’ll feel even better.”

Even though it was his first practice in five weeks, Campbell, who had a 5-7-0 record with a 2.33 goals-against average and a .923 save percentage when he was injured, went into everything 100 percent.

“It’s always full speed,” he noted. “I’m trying to get better at that, being [smarter about it]. But It’s just fun to be out there and competing.”

“[The knee] feels good,” he added. “It definitely feels like it’s been [awhile since he’s played], but hopefully, I’ll get that back pretty quick.”

Head coach Willie Desjardins told reporters that when Campbell would return to the lineup would be a decision made after Christmas. In the meantime, he has to get himself back into game shape.

“It’s just conditioning,” he said. “It takes a little bit to get back into shape on the ice, because you can only do so much in the weight room. That doesn’t really translate. It’s more about timing and tracking the puck.”

One thought on “Quick Hits: Backup Goaltender Jack Campbell Is Getting Closer To Returning to the LA Kings Lineup”