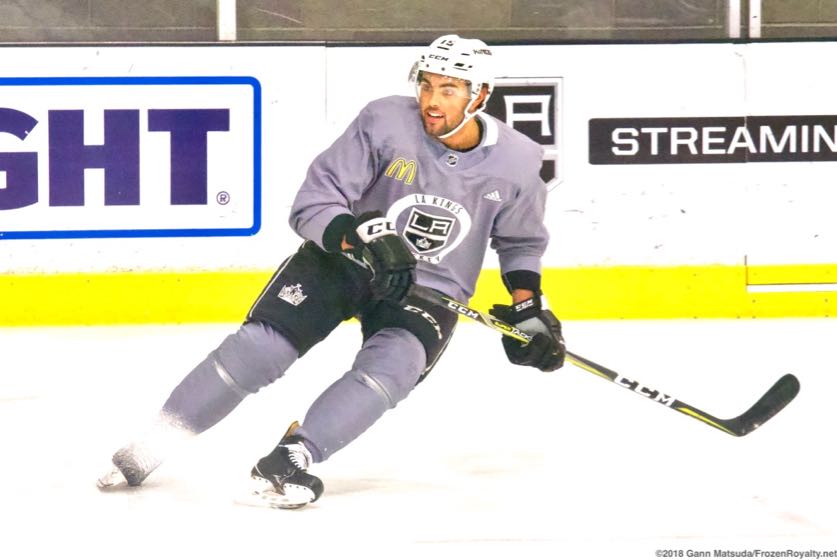 Iafallo spent the vast majority of the season on that line. But the Kings were hoping for more production from Iafallo, who scored nine goals and added 16 assists for 25 points with a +10 plus/minus rating and twelve penalty minutes in 75 regular season games.

Although Iafallo made quite the impression last season, there were times when his attention to detail and most notably, his wall play, slipped a bit, and it didn’t take long for him to find himself in street clothes as an occasional healthy scratch for a game or two.

Part of that was due to the fatigue that college players-turned-pro often suffer from—the college season is much shorter than the 82-game National Hockey League season. On top of that, NCAA games are played only on weekends. But after a summer in the gym and on the ice, Iafallo is in better physical condition. He’s also stronger and even a bit faster.

“The gym helps, following the Kings program,” he said. “I was back in Buffalo for a little bit. I still followed the program there and when I came back this summer, I picked it up here, too. I did a lot of work here. It was a great summer.”

“I also worked on my skating this summer,” he added. “With the way the game is going today, you have to keep up and build on your speed. You have to improve your edge work as much as you can because there’s fast players out there. You have to stay fast and keep your balance out there.”

“There were a lot of power skating drills and, as a winger, I did a lot of edge work—coming into the puck on breakouts and forechecking. I also worked on catching the puck quickly and driving to the net while protecting the puck, using every edge that you can get. This is all stuff you don’t really work on during the season.”

With improved conditioning comes greater endurance. Added strength will help with wall play and puck possession and with his power skating and edge work, Iafallo has already displayed increased speed in the pre-season. Add all that together and it’s no wonder that Iafallo is considerably more confident about his game.

“During the summer, I was able to look at my game and work to improve,” he noted. “During training camp, I’m just sticking to our systems and listening to the coaching staff. I’m using my speed more, too. Growing up, speed was my asset. Using that on every shift gives you more confidence. Using your attributes really gives you confidence.”

Having his first NHL season under his belt helps, too.

“I’m just feeling a little more confident out there,” said Iafallo. “Coming off a rookie season, I got a feel for things and a better understanding of what’s going on. I learned a lot from the older guys and the coaching staff. Everybody helped me, but I also learned that puck protection was something I needed to work on—controlling the puck more. Last year, I was always looking to make a pass, sometimes at the wrong time, instead of taking the puck to the net. That and puck protection in the corners was something I worked on this summer. The things I need to keep working on is developing a harder shot and driving the net.”

“Another thing is the 200-foot game,” added Iafallo. “Being on the right side of pucks and not getting scored on. That’s something we all really need to work on. It’s a huge part of the game.”

“He just looks like a stronger, more confident player,” said head coach John Stevens. “We had him playing with Adrian [Kempe] for the first little while and that line looked pretty dynamic. Then we put him with [Kopitar] the last couple of days and Kopitar and Brown looked like they had really good energy.”

“He looks like he’s got a level of confidence,” added Stevens. “He’s got a good reference point to the league now. He knows what he’s good at. He knows that he can be successful. He [also] looks like he got stronger. He’s always had good quickness and good detail. But he’s gotten a little bit stronger and that’s only going to help him.”