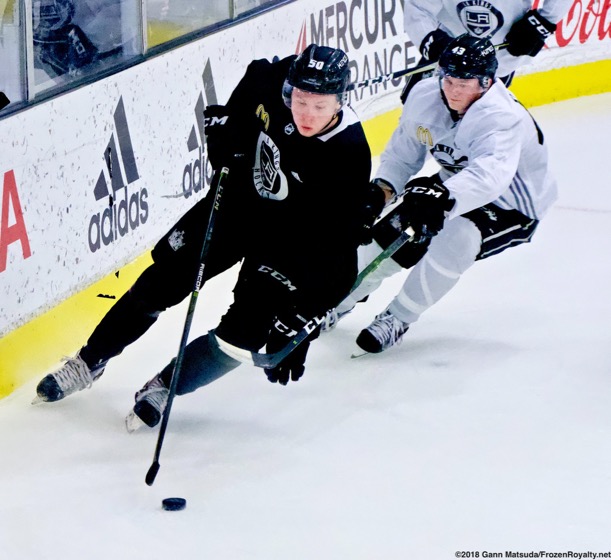 LOS ANGELES — In April 2006, when Dean Lombardi took over as general manager of the Los Angeles Kings, he insisted that they invest significant resources in scouting and development, which had never been done before in the history of the franchise. That move paid off, big time, as the Kings were finally able to build a winner primarily through the draft, something they had never come close to doing before.

Indeed, Lombardi brought the Kings two Stanley Cup Championships in three years, the first championships in Kings history and he did so with a philosophy that called for big, strong players who could check and move the puck up ice fast.

In an exclusive interview with Frozen Royalty in June 2016, Mark Yanetti, the Kings Director of Amateur Scouting, elaborated on the Kings successful philosophy during Lombardi’s tenure.

“It took us five years to create a philosophy that allowed us to win,” he said. “There were a lot of pitfalls, a lot of wrong turns. We did a whole lot more right than wrong. But it was a learning process to get the philosophy we wanted to the point where we could win, and then you win. Rightfully so, if you win with that philosophy, why would you not think that philosophy is going to keep winning?”

“Our problem was that we won, but we forgot that, even when we were winning, we were evolving the whole time,” he added. “You now think you’ve reached the end game. ‘Oh! We’ve got the model. This is the model of how to win.’ The thing we didn’t realize is that we came up with that model after five years. But the best thing about that model was the evolution. There was never a fixed point. When you win a Cup, go to a conference final and then win another Cup, you think that model is now finished. That’s where stagnation came, for me, at least, in terms of looking back at where we could improve. The stagnation was also in terms of creativity, in terms of approach, not necessarily in practice or work ethic. That’s one thing that never changed.”

“By the time we tweaked that philosophy, we were working in such a straight line, such a single layer, that we were kind of missing things. We weren’t thinking of things that we normally would have in the past.”

Fast forward back to the present and because his model pretty much stopped evolving, Lombardi is gone, having been replaced by Rob Blake on April 10, 2017. With the change and noting how the game has changed since the Kings won their two Stanley Cup Championships, the way the Kings determine who they would select in the National Hockey League draft has changed, too.

To be sure, to see what the Kings are trying to do is as simple as looking at their recent acquisitions. Most of them are fast, skilled players and prospects like Alex Iafallo, Austin Wagner, Jaret Anderson-Dolan, and 2018 first round draft pick Rasmus Kupari, among others.

But it’s not just about skating speed.

“Define speed,” Yanetti told Frozen Royalty in another exclusive interview on June 23, 2018, a couple of hours after the conclusion of the 2018 NHL Draft. “Is it the team with the fastest skaters or is it the team who moves the puck from goal line to goal line the fastest? Our philosophy was to get the puck from one end of the ice to the other as fast as we could and if we lost the puck, to get it back as fast as we could. We did that. Whenever we skated against a team that had five faster skaters than we did, we still moved the puck up ice faster than they did. We transitioned faster. We were a fast team the years we won the Cup and the year in between when we didn’t.”

Nevertheless, as teams evolved and changed to counter what the Kings had done to win their two Stanley Cup Championships, the entire NHL got faster and faster and it became quite clear that, for the most part, the Kings could not keep up. To make matters worse, they had been drafting players to fit a philosophy that had proven successful, and rightly so, but had been effectively neutralized by the increased speed throughout the league.

Given that the Kings had to respond to the changes in the game, how has that affected them in the draft? Teams always say that they choose the best player available when their time on the clock at the draft table comes up. But how do the Kings determine who that player is now, with the league-wide emphasis on speed, compared to how they did that under their previous philosophy?

“You ask how you determine who the best player available is,” said Yanetti. “There’s a whole bunch of ways to determine that and I’d be right each way. Are we trying to get more speed? Of course. Every team in the league is trying to do that. Are we sacrificing certain things to get speed? Not basic foundational principles.”

“There are certain things we won’t sacrifice to get speed,” added Yanetti. “So are the Kings trying to get faster? Yes. Absolutely. We need more speed up and down our lineup. But when we find speed—Kupari is an elite skater. But if he gets to the wrong place fast, that really doesn’t help him be an elite skater, does it?”

Indeed, contrary to conventional wisdom, it is not simply about skating speed.

“We’re trying to get faster throughout the lineup, but purposefully faster,” Yanetti emphasized. “Kupari leads with speed. But that’s not all he has. [2018 second round selection Akil] Thomas is a very good skater. [2018 third round selection Bulat] Shafigullin is a very good skater, [2018 sixth round pick Johan] Sodergran is an excellent skater. But they’re not just skaters.”

“If all things are equal, we’re taking the fastest skater,” Yanetti added. “If all things are not equal, we’re going back to that checklist [we used] with [2018 fourth round pick Aidan] Dudas. Speed is not equal, so what do we need to get? I’m not going to tell you what we need to get, because we have our way of judging that. We’re looking for speed, but we’re not looking for speed for speed’s sake.”

Yanetti indicated that with the change in general managers, there have also been changes in the way the Kings do things, in terms of scouting, development and the draft.

“There have been small changes,” he said. “There have been some philosophical changes. Rob manages completely different than Dean did, in terms of day-to-day management. It’s hard to answer that question without telling the world what our philosophy is. It would be easy for me to tell you that we value speed because 30 other teams will tell you the exact same thing. If I tell you that we value the combination of A, B, C and D in a player that does D, then we’re giving away exactly what we’re looking for. You don’t live long by telling people what you’re going to do or by giving away your plan.”

While some things have changed, as stated earlier, the Kings won two Stanley Cup Championships under Lombardi. A big reason for that was some of the things he brought to the organization.

“There are a lot of things that Dean did that made us very successful,” said Yanetti. “Whatever you might say, the LA Kings went almost 50 years without winning a Stanley Cup. Dean Lombardi [only] went five years without winning a Stanley Cup. He brought us two Cups. Before that, they didn’t have any. He did a lot of things that brought success to the Kings. But Rob is smart. He looked at the things that made us successful and he adopted some of them. He didn’t change any of them. He also looked at some of the things Dean did and said, ‘I know that made us successful, but if we did it this way, without getting rid of it and maybe making a slight tweak to it, maybe we’ll get a better result.’ There were also some things that Rob thought just didn’t work or that it didn’t work for him.”

“Rob didn’t come in and clear-cut a field,” added Yanetti. “He came in and skillfully, artfully pruned some bushes. He instilled a different mindset instead of a different skill set. I can’t go into further detail on that, but that’s the type of stuff Rob did and that’s why I think people should have some optimism.”

“Rob’s done some pretty good things on the pro side and on the amateur side. He looked at each situation openly, rather than coming in and changing things just because it’s ‘my way or the highway.’ He’s smart enough to know that some things worked and some things didn’t. You fix the things that don’t work. You make the things that work better.”