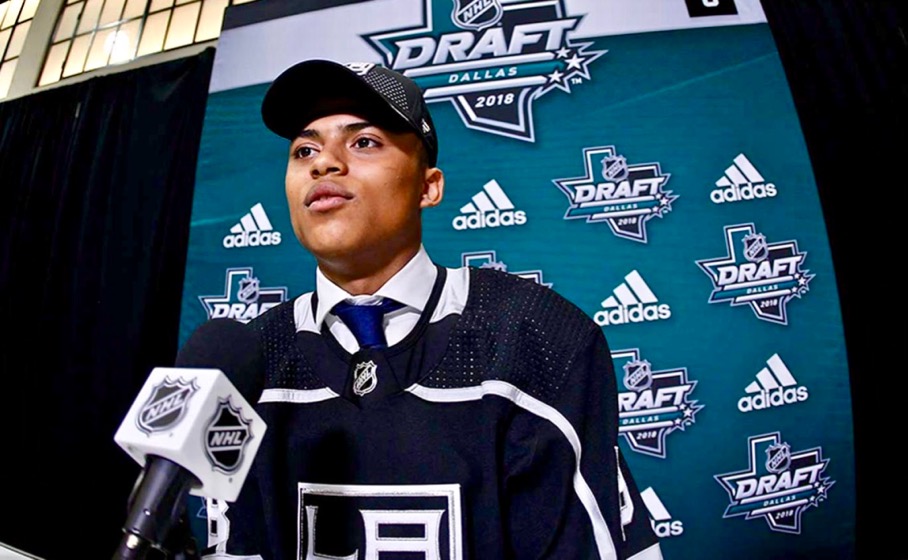 FROZEN ROYALTY EXCLUSIVE: Our coverage of the 2018 National Hockey League Draft continues with more from an exclusive interview with Los Angeles Kings Director of Amateur Scouting Mark Yanetti. In Part 2, we go in-depth regarding the Kings second round pick, center Akil Thomas, comments that you can read only here on Frozen Royalty.

LOS ANGELES — The Los Angeles Kings started off their second day of the 2018 National Hockey League Draft by selecting center Akil Thomas from the Niagara IceDogs of the Ontario Hockey League in the second round (51st overall).

“Thomas has speed, but not the blazing speed that Kupari has,” added Yanetti. “But he has tangible speed, NHL speed. He’s got agility and a little more subtlety in the way he uses his speed. There’s a little more slowdown in Thomas’ game that he uses to open lanes up. He’s able to attack areas with more subtlety. He’ll allow the play to develop rather than drive the play, to compare him to Kupari.”

Thomas can also play just about any role on the power play.

“He played quarterback/point on the power play, he played on the half wall and he played below the goal line,” Yanetti noted. “Those are three distinctly different skill-based attributes needed to succeed in those positions. Usually, a guy who succeeds below the goal line is not the guy who succeeds at the blue line. But he was able to play all three of those positions, regardless of what they needed in Niagara.”

Although just about every young NHL prospect needs to improve their strength and conditioning, Yanetti indicated that Thomas needs to focus on those aspects of this game a bit more than he has in the past.

“He’s got a very underdeveloped frame and he’s going to have to improve his fitness and strength,” he said. “I think there were some inconsistencies in his game simply because he was tired. He played a ton of minutes in an F1 or F2 role, as a 17-year-old. That means that you’re handling offensive and defensive minutes.”

Character is also a strength for Thomas and perhaps not in the way you might think…I’ll let Yanetti explain.

“I don’t people have the right definition of ‘character,’ when it comes to succeeding,” he observed. “I think they often have the right definition when it comes to who you want to date your son or daughter. I think maturity and age go a long way towards addressing deficiencies for people with good character. I don’t think they do anything for people with average character or bad character.”

“Thomas is a great character kid,” he added. “He deals with adversity very well. He might be one of the few kids whose got character as in the first definition and the second definition [that he mentioned]. So I think age should address many of the small issues that are in his game right now. But then you throw in the fact that our development staff has proven, time and time again, what they can do. Now you add true direction from people who are at the forefront of their field. I think optimism should be high for him.”

Yanetti learned a great deal about Thomas’ character by putting him through the proverbial ringer during the interview process prior to the draft.

“[Kings amateur scout] Chris Byrne and I interviewed him twice,” he noted. “I would call them ‘interviews.’ I guess Thomas might call them ‘interrogations.’ Sometimes we’re hard on guys in those interviews just to see how they react. But that’s life, in my opinion. We’re making million-dollar decisions in the first and second rounds. If you want a cozy, hug-it-out meeting, that’s fine. Do you want to find out if you should spend the money and allocate resources there? Sometimes, it’s going to be an interrogation and he had two of them. He dealt with tough questions from us and he did really well in those interviews.”

“I’m really anxious to see, once he gets a little more direction on how to make himself a player—I don’t think there’s going to be a linear improvement. You could see a more exponential jump. His potential is—I’m not even sure that he knows what his potential is. He had 81 points this year. That doesn’t happen by accident. He looks at himself and sees that he has 81 points. I look at him and think that maybe he could’ve had 101 points. I see a guy who has tons of tools already and still has room for improvement, which is a little more rare—guys who produce like him are more finished products. I don’t think he’s a finished product in the least.”

LEAD PHOTO: Center Akil Thomas shown here immediately following being selected by the Los Angeles Kings in the second round of the 2018 NHL Draft on June 23, 2018, at the American Airlines Center in Dallas, Texas. Photo courtesy Los Angeles Kings.