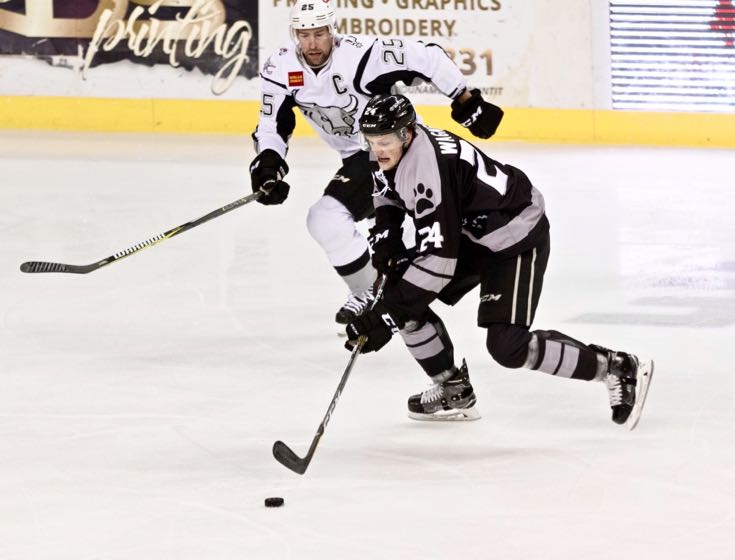 ONTARIO, CA — If you’ve watched Edmonton Oilers center Connor McDavid, you know that he has a combination of size, skill and speed the likes of which haven’t been seen in a long, long time, perhaps never before.

To be sure, McDavid is absolutely breathtaking to watch and although he doesn’t have the size and skill to match McDavid, the Los Angeles Kings have a left wing prospect in their system, 20-year-old Austin Wagner, who has speed comparable to McDavid’s.

Wagner was selected by the Kings in the fourth round (99th overall) of the 2015 National Hockey League Draft. The 6-2, 185-pound native of Calgary, Alberta played four seasons with the Regina Pats of the Western Hockey League, with his best year coming in 2016-17, when he scored 30 goals and added 36 assists for 66 points in 64 regular season games, with a +52 plus/minus rating and 94 penalty minutes. In the playoffs that season, Wagner played in 22 games, scoring 16 goals, and contributing five assists for 21 points.

“One of the fastest skaters who we’ve ever drafted, for sure,” said assistant general manager Michael Futa. “He’s a bit of a freak of nature, as far as his leaping ability is concerned—the stuff he’s done in the gym, in terms of explosiveness. He’s just so explosive. It’s something that really translates on the ice.”

“We say that a ‘five’ skater would be Connor McDavid,” added Futa. “This kid is a four or five skater. In junior hockey, there weren’t many nights where his speed didn’t create two or three breakaways. Actually, it was kind of funny, the number of breakaways that he created with just sheer speed.”

In the Pats’ playoff run last season, Wagner averaged nearly one point per game, despite playing with a bad shoulder injury that required surgery after the season ended.

“We were incredibly impressed with the fact that he was hurt throughout the WHL playoffs,” said Futa. “He recalls taking the hit. He played with the injury through the whole thing. That’s something where you take note of the kid’s competitive nature.”

That injury, and the subsequent surgery last summer, prevented Wagner from participating in the Kings 2017 training camp and delayed the start of his 2017-18 season. When he was finally medically cleared, the only question remaining was would he begin his professional career with the Ontario Reign of the American Hockey League, or would he return to Regina to play an over-age year?

That answer came on December 2, 2017, when the Kings assigned Wagner to the Reign. Since then, he has played in 41 games scoring eight goals and adding seven assists for 15 points, with an even plus/minus rating and 43 penalty minutes.

What jumps out at you from those numbers is that Wagner’s offensive production isn’t matching up with his blazing speed, so far, anyway.

One factor in that in his recovery from his shoulder injury and surgery.

“It’s going to linger, for a little bit, until I get a good summer of training in, and get my strength back,” he said. “But it’s feeling good. I’ve just got to stop thinking about it and just play. That’s the biggest thing for me. I play a lot better when I’m not thinking about my shoulder, but it’s been good so far.”

Wagner indicated that although he no longer suffers any ill effects from the injury, not being able to train during the off-season set him back quite a bit.

“[The injury doesn’t affect much] at all,” he said. “Maybe a little bit on the strength part, in the corners, winning battles along the walls, stuff like that. But I’m 20 years old. I’m the youngest guy and I know that I’ve got to put on some weight in order to compete in this league, with how heavy guys are, and how they compete. That’s a summer issue.”

Although strength has been a challenge for him this season, it is apparent that he hasn’t lost a step, in terms of his foot speed. That much was apparent to this reporter on February 10, when the Bakersfield Condors (Oilers affiliate) faced the Reign in Ontario.

In that game, a 6-5 overtime victory for the Reign, Wagner scored on a rare end-to-end rush at 8:19 of the first period, a goal in which his speed was the reason that, not only was he able to carry the puck all the way up ice, but also leave Bakersfield defenseman Joey LeLeggia in his wake, wondering what flew past him.

“That felt good,” said Wagner. “I got my legs moving. It’s been awhile since I’ve taken the puck to the net, and that’s what happens when you do. I have to learn not to be afraid of anything, and just take it to the net. I’ll make something good happen, draw a penalty, or score a goal. That goal was an example of why I should do that more.”

That goal was just a glimpse of what could be down the road for Wagner. Although it is apparent that he needs to add strength, especially in light of his inability to work out much last summer, he has a lot of work ahead of him to develop his skills further and, at the very least, get a lot closer to matching his great speed.

Futa indicated that Wagner is working with the Kings development staff on that and more.

“It’s a hard one because he’s so different,” said Futa. “If you look at a guy like Trevor Lewis, who creates so much with his speed—it’ll be interesting to see how it translates. He put up big numbers the last year, and he continues to improve.”

Futa pointed out that, to a much greater degree when compared to speed, skills can be taught and developed.

“There’s certain young players, like Tyler Toffoli, Alex Iafallo, Spencer Watson, who’ve always showed a natural scoring ability,” he noted. “Wagner, by working with our development staff, and the work he’s going to put in, is going to become a better shooter.”

“I don’t think it’s ever been something where he just naturally finds the back of the net,” he added. “But because of his incredible speed and quickness, and his ability to create space and get open, he’s going to be afforded the opportunity to score. If he becomes a more consistent finisher, he’s going to be a really deadly weapon, because you just can’t teach the speed that he’s got.”

While he works on his skills, there are other aspects of the game that he’ll need to learn as well, just like any young player moving from major junior hockey in Canada to the AHL.

“The pace is a lot different [at the AHL level],” said Wagner. “Better players, older players who have more experience. I’m just trying to learn as much as I possibly can from the guys here and get a lot of help from the coaching staff and the development staff. I’m just trying to get better every day. That’s the biggest thing.”

“It was a big eye-opener for me, coming up from junior, where I was putting up a lot of points on a nightly basis,” added Wagner. “But here, you’ve got to make every shift count and you’ve got to be ready to go, every single game. Here, you’re not always going to be putting up points, but that doesn’t mean you aren’t playing well. It’s about being good defensively, too, and you have to play every shift as hard as you can, because you don’t know how many of those you’ll get in any game.”

“I’ve got a lot to work on here before I can call myself a good player in this league,” he added. “I’ve got to work on my puck protection, and my hands have to keep up. Even shooting—quicker release, a bit more accurate. Even my foot speed—I can work on getting to the middle quicker, crossing over a bit faster, and work more on the agility side of the speed game. The puck also moves a lot faster up here. You have to think ahead. Once you make a play, you can’t just stand up, like in junior. You’ve got to know where you’re going next, so I’ve got a lot to work on. It’s good to be here, learning from everybody.”

Then there’s the added responsibility of being an adult and taking care of himself—being a professional is about a lot more than just what happens on the ice.

“[It’s] everything from off the ice to on the ice, learning how to take care of myself off the ice—staying hydrated and eating right,” he noted. “I learned a lot from my parents about how to cook and clean. The fun thing about cooking is that you can do whatever you want. I do try to cook every night and stay healthy, eating good meals, trying to keep my weight up. That’s big during the season. Strength and weight are huge things.”

“It’s fun living on my own,” he added. “It’s nice to have people come down [from Canada] to visit]—my family, my girlfriend. It’s good to have them come down and help me.”

Getting back to Wagner converting on breakaways, as mentioned earlier in this story, that goes back to improving and developing his skills.

“Our work with him is to make sure that he converts on some of those breakaways,” said Futa. “But his speed is exceptional, he’s a good penalty-killer, he’s an agitator. He gets under people’s skin. He’s definitely a prospect who we’re really, really high on.”

“He’s a smart hockey player, but I think his mind has to catch up with his speed,” added Futa. “When you’ve got a kid who’s that fast, you don’t want to him to have to slow things down. But I think he has to slow down the game, a little bit, and relax himself, composure-wise.”

“Sometimes, he gets a little bit emotional with himself—rattled. It’s the temperament that he’s got to learn to control, and channel his emotions a little bit better, because, like I said, he’s got elite speed.”