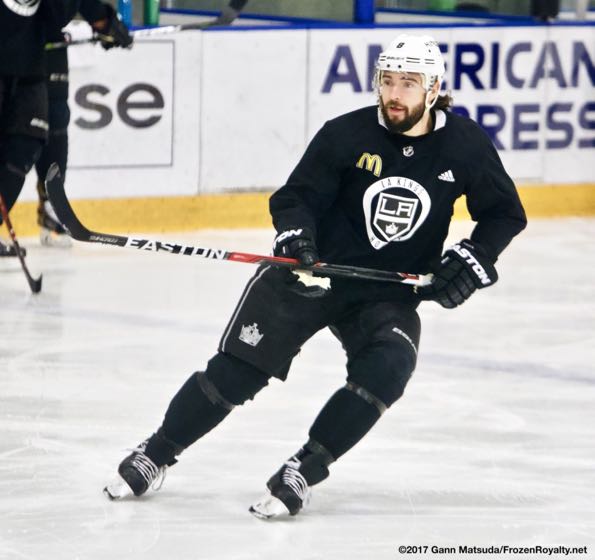 EL SEGUNDO, CA — The National Hockey League’s Christmas break is always a time to take a long, hard look at a team to see where it has been that season, and where it is likely to go, and not just because the league takes a few days off at that time.

Indeed, by the time we reach December 25, NHL teams have played enough games to get a legitimate, realistic feel for what they’re made of, and the Los Angeles Kings are no exception.

With one game left to play before Christmas (tonight at San Jose), the Kings have played 36 games, earning a 22-10-4 record, good for 48 points, putting them in first place in the Pacific Division, two points ahead of the Vegas Golden Knights.

The Kings also lead the Western Conference by two points over the Golden Knights, Nashville Predators, Winnipeg Jets, and the St. Louis Blues.

As the numbers reveal, the Kings are scoring about half-a-goal per game more this season compared to last year, and they’re slightly better defensively, too.

Overall, head coach John Stevens likes what he has seen, so far.

“There’s lots to like about our team,” he said. “We’re really excited about the ownership that the leadership group has taken with our hockey team. They deserve a lot of credit for the success we’ve had this year.”

Stevens also pointed to the way his team has dealt with adversity, most notably, losing star forward Jeff Carter to a long-term injury.

“I think our team game has continued to improve, in terms of the way we want to play, and some of the changes we wanted to make,” he added. “I think we’re starting to play faster. We have scored more, five-on-five, and we’ve got secondary scoring that wasn’t there last year, so we’re not just counting on one or two guys to score for us.”

“We never give up, whether we’re down or up,” he said. “We’ve been really good in the third period all season. We’re one of the best in the league, in terms of goal differential. We have a lot of pride in here. Everyone competes well, both ways.”

As reported earlier, the Kings lead the Pacific Division and the Western Conference. But it doesn’t take much to see that, despite their fast start to the season, and their improvement on offense, their place in the standings is rather tenuous.

“We like where we are, 100 percent,” said Doughty. “But I don’t like the fact that we should probably have a little bigger gap in the division. Vegas has games in hand on us. So do a few other teams. There are definitely a lot of games that we let trickle away that we should’ve won during [our] losing streaks. That’s frustrating, but we’re in first place, so overall, I’m happy with the start.”

A major factor in this is the fact that the Kings often find themselves behind in games.

“We’ve been behind a lot this year,” said forward Dustin Brown. “Our first periods haven’t been our best, but our third periods have been really good.”

“Good teams find a way to win when, maybe, we shouldn’t,” added Brown. “But we’ve got to learn—it’ll be nice to play with a lead.”

“I do think we have a group of players who’ve been down that road before, who have played in tight games,” Stevens noted. “They have the ability to come from behind. But in hockey, statistically, that’s not a good habit to get into. When you play from behind, you’re forced to chase the game.”

One reason the Kings end up trailing in games so often, is a lack of consistency in their play, an issue that has been apparent, even in many of their wins.

“We need to be more consistent every night,” Doughty lamented. “We can’t go on these big winning streaks and then on a losing streak, and keep on that kind of trend. We need to have those winning streaks, and maybe mix in a loss or two, every ten or 15 games. That would be a lot better.”

“You get consistency from players being more consistent in their own games,” Doughty added. “If everyone can look at themselves in a mirror and say, ‘I did everything I can tonight,’ we’re going to win most games. But we’ve lacked in that department. Not everyone shows up on the same night.”

“Some guys just aren’t going to feel good every single night. That’s just the way it is. But it’s up to the rest of the guys in the room to help those few guys out.”

As Doughty alluded to regarding his team’s inconsistent play, the Kings got off to a very fast start to the season. But later, they had a skid where they won just once in an eight-game span (1-6-1). They followed that with an eight-game winning streak, and then, a 1-2-1 road trip.

Given that it took an eight-game winning streak just to be two games over .500 in those 20 games, 10-8-2 is not only unimpressive, it’s barely mediocre.

“I wouldn’t say our start was the best part of our season,” he said. “Teams were all just getting ready, so I wouldn’t say that was our best. I think our eight-game winning streak, the early part of it, was our best. We were playing really well at the beginning of that streak, even though the last three games, we weren’t playing very well. I also think we deserved to win the games in New York that we didn’t get. We played well.”

Special teams might also be an issue. As reported earlier, the power play is ranked 27th out of 31 teams, and over the past couple of weeks, penalty-killing has become an issue, despite the fact that the Kings continue to lead the league in penalty-killing.

“There’s obviously lots to improve on,” said Stevens. “Our penalty-kill was really good for a long stretch of time, but that’s fallen off. Our power play has scored some big goals at key times, but I’d like to see the consistency improve and get a little more production out of our power play. In our overall team game, I’d like to see us continue to evolve.”

Another problem for the Kings this year has been turnovers—they are giving the puck away slightly less than eleven times per game.

“Giveaways—it’s hard to defend [after a turnover] because you’re not expecting a giveaway,” said Doughty. “You’re expecting the play to be made by your teammate, or the puck to be picked up [by a teammate], or whatever the case may be. When teams turn the puck over, it’s the hardest thing to defend because you’re not expecting it. You’ve got to re-gap, pivot, you don’t have speed. There’s so many factors that go into it. Obviously, when we’re not turning the puck over, we’re a much better team.”

The Kings shift in focus on scoring more goals has contributed to turning the puck over more this season.

“I think you’ve always got to manage the puck,” said Stevens. “The challenge, with a team that’s trying to score more—I think we caught ourselves a little bit in that, as the saying goes, the energy flows where the focus goes. If you’re focusing on scoring more, sometimes, there are other parts of your game that slip.”

“We’ve really cautioned ourselves, knowing that we have to have success, and there has to be a recognition of an opportunity to make a play that’s a support play, or an opportunity to get a puck in behind [the defense] with speed that might not be a sexy play, but it’s a really effective play for the hockey team.”

“That’s a process that takes time. There have been times where we’ve been really good at that, and there’s times when we could be better at it.”

How do they get better at managing the puck?

“For me, it’s the willingness to do it,” said Doughty. “If you go into a battle, if you have the puck, and you think, ‘it might get knocked down,’ or ‘I might not win this,’ you’re not going to win it. You’ve got to believe that it’s going to happen, that you’re going to get the puck by this guy, get it down 200 feet, whatever it might be. Things aren’t going to happen the right way every time. You’ve got to learn from it. But it comes down to willing and believing that [what you want to do] is actually going to happen.”

With the improved offensive output, the Kings have something to build on heading towards the stretch drive. But the games get much more intense and competitive after the Christmas break, as teams make their big push to make the playoffs.

This is the time we’ll see if this edition of the Los Angeles Kings is for real. But as Doughty noted, they’ll need to address their consistency issues and cut down on turnovers. If they fail on either of those counts, even if Jeff Carter returns in February or March and reaches top form quickly, good teams will expose the Kings’ issues in a playoff series, and maybe even during the stretch drive.

Neither of those options is desirable for the Kings, that’s for sure.