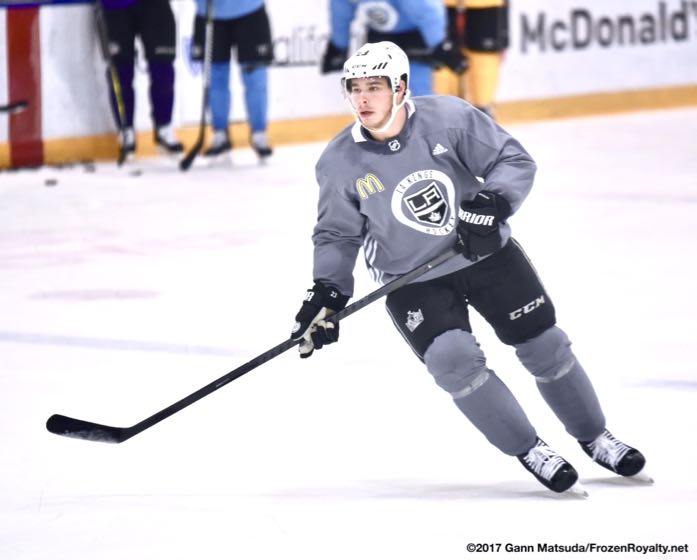 EL SEGUNDO, CA — The Los Angeles Kings have returned home in triumphant fashion after earning a perfect 4-0 record on a road swing through Detroit, Washington, St. Louis, and Chicago.

Before that, they defeated the Anaheim Ducks at Staples Center in a shootout on November 25—the Kings will try to extend their winning streak to six games tonight against the Minnesota Wild, the first game of a three-game home stand.

But before winning five straight games, the Kings were mired in a 1-6-1 slump in which they scored just 15 goals while giving up 22.

In stark contrast, the Kings scored 17 goals during their five-game winning streak, while allowing just seven.

“Part of it is that we’re getting scoring from up and down our lineup,” said forward Dustin Brown. “That’s key to winning in this league. We’re getting big goals from so-called third and fourth liners. That helps. The one goal that comes to mind is [forward Adrian] Kempe’s goal in St. Louis. It was late in the period. It restored our two-goal lead going into the third period. It was just a big goal.”

“This last road trip, we were opportunistic, for sure,” added Brown. “But if you look at the chances we had, we’re getting a lot of chances coming out of the neutral zone. We’re getting the puck and moving it very quickly up the ice. That left our game during that slump. We were holding onto the puck, slowing everything down. Now, if you look at some of the goals we’ve scored, we’re transitioning the puck much quicker, which is hard to defend.”

“The biggest difference is that we’re just finding a way to win, and not really crumble,” he observed. “I’m not saying that we crumbled before, but I don’t know how many of those seven losses were one-goal games, where we just couldn’t get it done. Obviously, we’re scoring more goals. That helps give [goaltender Jonathan Quick] a lot more support. But even [at Chicago on December 3], it was 0-0, going into the third period. Somehow, we found a way to win, and it wasn’t easy. We’re just getting a few more percent out of everybody. If you look at the big picture, that makes a big difference.”

For the record, the Kings lost five one-goal games during that 1-6-1 slump.

“We’re finding ways to win. Quickie and [backup goaltender Darcy Kuemper] have been a big part of that,” Kopitar continued. “Maybe we gave up a little bit more than we wanted to, but at the end of the day, we’re finding ways to win. We’re scoring a few more goals now, providing a little more support for those two back there. Quickie last night, for example. That second period—if it wasn’t for him, we’re in a big hole, maybe one that we couldn’t recover [from].”

“Darcy in St. Louis, he came out really strong,” Kopitar added. “I think they had 18 or 19 shots in the first period, but he was there for all of them. That’s very nice to see. We just have to simply things, a little bit, and try not to do the stuff that backfires on you.”

What backfires is trying to make a play when the opportunity to do so isn’t really available. That usually results in a turnover, something that has, on occasion, plagued the Kings this season. But failing to manage the puck was never more apparent this season as it was during the second period at Chicago.

“The second period was, arguably, the worst period we’ve played this year,” Kopitar lamented. “We were turning pucks over with me right on top of that list. I think I had three or four giveaways where I didn’t just chip the puck out. I passed it to the guy’s stick.”

“We were hemmed in our own zone a lot against Washington, but that wasn’t a by-product of mismanaging the puck,” said Brown. “It was a by-product of playing against some really good players. But [at Chicago], we had the puck on our sticks a lot, and gave it away.”

“Stuff like that is going to happen,” said Kopitar. “That’s the thing. You’re going to have periods like that. I think what that shows, with this team, is the resiliency of coming back the next period. Going into the third period, 0-0, and you could easily fold, because you’re 3-0-0 on the trip—you can see the plane taking off already. But we pulled ourselves together and won that game. That says a lot about this team.”

Playing smarter and making better decisions are critical to cutting down on turnovers.

“Some of the keys are to make plays when you have them,” Brown explained. “But you have to identify when you don’t have a great play to make, or a regular play to make. [In that case], it’s just advancing the puck out of the zone.”

“There were a lot of pucks [at Chicago], especially in the second period, where we were ten feet from clearing our zone, and the puck stayed in,” Brown elaborated. “As a forward, when you keep a puck in [the attacking zone] when it was heading out of the zone, that’s when you get your best chances. That’s when fatigue sets in for the defense.”

“It’s just identifying when you need to just chip the puck out of your zone. It’s also about—we play 82 games. You’re not going to be at your best every night, and when you aren’t, you have to realize that as early as you can in the game. That’s a big mental trap. When you’re not feeling good, sometimes you try to do more when it really should be the other way around.”

“We always want to try to manage the puck,” he said. “I thought Kopi’s line [at Chicago]—part of it is the fact that they’re trying to take the game on themselves. They felt that if we could get the first goal of the hockey game, it would really make a difference, so every time they got the puck, they were trying to score, as opposed to just trusting the team game.”

“[The Chicago Blackhawks check] very well,” he added. “They skate pucks off your stick really well. I think the right play, a lot of times, is to get pucks behind them. That’s a process that, over time, we hope to get better and better at—recognizing when there’s an opportunity to make a play on the rush, and when there’s an opportunity in behind [the defense] with speed.”

Another factor in the Kings’ current five-game winning streak is that, once play entered their zone, they were pretty solid, defensively, at least when they were playing well and not turning the puck over.

“We loved the trip,” said Stevens. “Like any other point in the season, there’s always going to be parts of your game that you want to improve upon. I really liked the way we played in our own zone. I thought we defended really well. We were fast, and we had really good posture between the dots.”

Stevens indicated that a major factor in their improved defensive zone play has been that the Kings are protecting the middle of the ice better than they did early in the season.

“It’s getting five people back quickly, and in the right posture and starting point,” he noted. “I think we’ve done a really good job at getting people back inside first, and closing quickly. Earlier in the year, we were guilty of coming back a little too wide. But I think we’re doing a better and better job of getting the dangerous ice taken care of quickly on entries, which starts with your rush coverage, and then, quickly fanning out from there, so I just think our initial starting point with our coverage has been very good.”

“We’re not giving up very many scoring chances when we’re on our game,” said Brown. “That’s a staple [of how we play].”