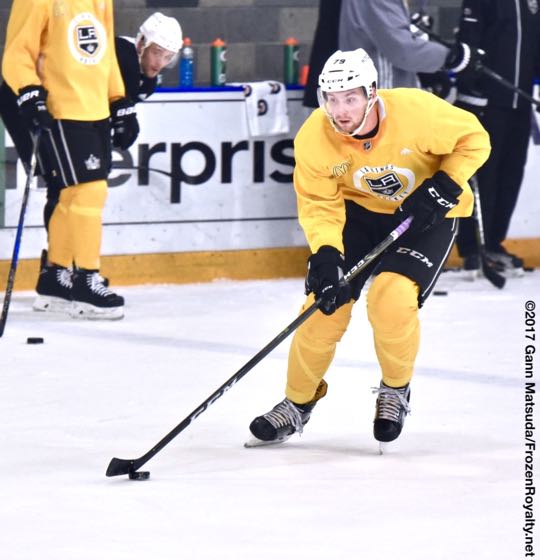 EL SEGUNDO, CA — Last Wednesday, when the Los Angeles Kings handed the Montreal Canadiens a 5-1 loss, the stars of the show were forwards Adrian Kempe, who recorded the first hat trick of his National Hockey League career, and Michael Cammalleri, who scored two goals and added two assists for four points after being a healthy scratch in the team’s previous two outings.

To be sure, Kempe and Cammalleri were surrounded by a throne of reporters after the game, and they were pretty much all reporters asked head coach John Stevens about during his post-game press conference.

Completely lost in the excitement was the fact that yet another young player, right wing Justin Auger, who was selected by the Kings in the fourth round (123rd overall) of the 2013 NHL Draft, became the fourth this season to make his NHL debut with the Kings.

Alex Iafallo, Oscar Fantenberg and Kurtis MacDermid all made their NHL debuts on October 5, when the Kings defeated the Philadelphia Flyers, 2-0, at Staples Center in Los Angeles.

The 23-year-old, 6-6, 232-pound native of the Kitchener-Waterloo area of Ontario, Canada, has spent the previous three seasons with the Kings’ primary minor league affiliate—one season with the American Hockey League version of the Manchester Monarchs, helping lead the team to the 2015 Calder Cup Championship, and then, two seasons with the Ontario Reign of the AHL.

This season, it looked like Auger was destined for a fourth year in the AHL after he cleared waivers and was assigned to the Reign to begin the season. But he was recalled on October 17, and played the next night against the Canadiens.

“It was a crazy two days, just getting the call,” he said. “I was just taking it in stride. I went out there, trying to keep it simple, and play my game. I didn’t try to do anything crazy. It was a lot of fun to be out there.”

As it often does for players making their NHL debut, Auger had a few butterflies early.

“I think it’s natural to be a little nervous, so yeah, I was,” he noted. “But I just went out there and I thought to keep my feet moving and don’t over-think it. Keep it simple. I went out there on the first couple of shifts and did that.”

“After that, it was just like any other hockey game,” he added. “You think the same way you did before. You just do what you know.”

But it wasn’t just any other hockey game. Indeed, this wasn’t the Guelph Storm of the Ontario Hockey League, or the Ontario Reign of AHL. This was the Los Angeles Kings. The NHL. The big show.

“Yeah, for sure,” he said, chuckling. “But I knew that I was ready to make that jump. I felt good out there. I felt like I belonged.”

Three years ago, Auger joined the Kings organization as a bit of a project. His size was his best asset, but his skating, hands, and most everything else needed a lot of work if he was to advance to the NHL, and although he isn’t likely to ever become a 30-goal scorer, let alone a top six forward, hard work has certainly paid off.

“It feels great after putting in three years in the minors, just working hard to get to this point,” he beamed. “Just everything coming together feels really good.”

“That’s what you dream of, as a kid [in Canada], growing up,” he added. “Everyone’s dream is to play in the NHL, and that’s been my goal since day one. I’m happy to be here. Hopefully, it’s the first [game] of many.”

Alas, there was no storybook ending in Auger’s NHL debut. He didn’t figure in the scoring, and as reported earlier, Kempe’s and Cammalleri’s offensive explosion that night pushed Auger way out of the spotlight.

But even with Kempe’s and Cammalleri’s heroics, Auger and his debut was front page news for at least two fans at Staples Center that night.

“[My parents] were super excited [when he told them about being called up to the Kings], especially with your] parents driving you to practice at 6:00 AM on weekends, and everything,” said Auger. “They’re totally supportive of me, and as soon as I told them, they were already looking at flights to get out here. They weren’t going to miss the game, no matter what they had to do. My parents both made it.”

“They’re so proud of me,” he added, with an ever so slight tinge of emotion. “My Mom was telling me that my Dad was going around, telling everyone that I was playing [in my first NHL game]—you know, the typical Dad stuff. He’s proud of his son.”

“That felt really good. I haven’t seen them in a couple of months, since I was down here at [training] camp, so it was nice to get them in here for the day. It was nice to share the experience with them.”

It wasn’t just his parents who were proud of him, either.

“Friends, past coaches, buddies I grew up playing with [called or sent text messages],” he said. “They congratulated me, and wished me the best.”

“It’s funny,” he added. “I’ve heard from guys I played minor league hockey with whom I haven’t spoken with in a few years. They were telling me, ‘don’t forget the little guys back in the minors.’”

“It’s good to hear from people you haven’t heard from in a while who are still following you, and wishing you the best. They’re keeping an eye on you, even though you don’t know it, sometimes.”

Auger also noted that Reign head coach Mike Stothers had a few words for him as he left Ontario.

“He gave me a call and said, ‘I hope I don’t see you back through these doors,’” said Auger. “He wished me the best. He’s happy for me. I’ve been with him for three years, so we have a great relationship. I love playing for Stutts.”

“Coming from junior, he really taught me how to be a pro,” added Auger. “I can see that, as my career went on, I grew more and more mature as I got older, and just fit into the mold of a pro hockey player.”

Stevens liked what he saw from Auger in his NHL debut.

“I thought he did good,” he said. “I thought he was a really responsible guy. He made some good plays along the wall.”

“It’s a tough situation, coming in against a team that plays fast, with a lot of speedy forwards who come at you with a real pressure game,” he added. “But I thought he gave us some good, solid minutes in a really odd game where you have a guy [Jeff Carter] going out early, and you have to move people around. But we were happy with his game. I thought it was a really good first step. He got in, he looked comfortable, he used his body well, he drew a penalty by driving around the corner, trying to get to the net.”

“You’re hoping that a young player will come in and try to do the things that he did, [playing his game—doing the things that earned him his call-up], and I thought he tried to do that. I’d like to see him get up to pace. That’s always the challenge with a young guy, but we were certainly happy with his first effort.”

As Stevens noted, the Kings want Auger to just play his game, and for his part, that’s exactly what he did against the Canadiens.

“I don’t try to get too far out of my comfort zone,” he said. “I know what my game is—getting the puck into the zone, getting in on the forecheck, causing a stir, using my long reach, getting sticks on pucks, creating turnovers, working the puck down low, going to the front of the net, and just being an offensive threat there.”

“I just played my game, pretty much. I tried to play well, positionally, so I never get caught on the wrong side of anyone. Like I said before, I kept it simple. I wasn’t going to toe-drag-dangle anyone. It was chip pucks, cycle pucks, go to the front of the net, and bang away.”

One thought on “Lest We Forget: Justin Auger Was Solid In His NHL/LA Kings Debut”