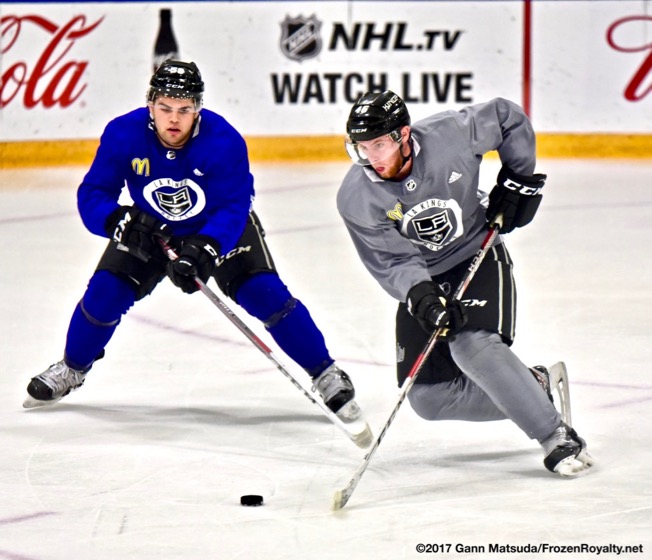 The 21-year-old, 5-10, 178-pound native of London, Ontario was playing in what was supposed to be his final season with the Kingston Frontenacs of the Ontario Hockey League in 2015-16 when he suffered a wrist injury that required surgery.

“Last year was unfortunate because he needed last summer to get stronger in order to play in the American Hockey League [in 2016-17],” said Kings assistant general manager Michael Futa. “But with his injury—he had the surgery, so he really wasn’t able to train. By the time he was healed and healthy, it made no sense for us to start his pro career, so he ended going back to junior for [an over-age year], and he had a great playoff run with Mississauga. They went to the [Ontario Hockey League] finals.”

As Futa noted, Watson, who was selected by the Kings in the seventh round (209th overall) of the 2014 National Hockey League Draft, played an over-age year with the Mississauga Steelheads of the OHL last season.

“I had a really good junior career, and I’m pretty proud of how I conducted myself over the five years I was in the league,” Watson told Frozen Royalty exclusively during the Kings 2017 Rookie Camp. “Coming back from my over-age year last season after having wrist surgery, I think that helped me a lot, just to get another year under my belt—get a little stronger, and make sure I was ready, health-wise, to [move to the next level]. All of that combined to [get me] to where I am now. I feel like I’m ready to take the next step.”

In junior hockey, Watson was a sniper. But he quickly noted that he has also worked on his defensive zone play.

“I’m a natural goal scorer,” he noted. “I like to find those open areas, those quiet spaces, and then, when I get those chances to score, I bury them. At the same time, I’ve been working hard on my 200-foot-game, working hard down low, on getting back—being defensively sound. But when it comes to the offense, I just let it flow. Scoring is kind of my passion.”

“[Defense is] something you really have to work at,” he added. “You get some good experience, but if you’re not sticking to the details, you can wander off a bit. It’s all about the mental side of it—making sure you’re working hard down low and that you’re getting back in the right position.”

“Everyone loves to play offense, but defense is what wins games. At this level, everyone has to play [defense]. It’s probably one of the most important things to learn, especially early on.”

But having a knack for scoring goals or being able to play a 200-foot-game won’t mean a thing if Watson can’t get to where he needs to be on the ice because of his skating and speed, or lack thereof—that’s been the knock on him. But that’s also something he’s been working hard on.

“[What the Kings want him to work on] was kind of clear this summer,” he said. I spent pretty much all summer with Dave Cruikshank in Milwaukee, the Kings’ skating coach. “I worked really hard this summer on getting stronger and on my skating. I traveled back and forth to Milwaukee every other week. That was the main focus because coming in here, it’s a faster, bigger league, so I really wanted to focus on building speed and becoming a stronger skater.”

Watson indicated that the summer work has paid dividends.

“I feel like I improved a lot over the summer,” he said. “I’ve seen video of where I started this summer, compared to where I am now, and there’s a huge difference. You can tell that I’m a lot stronger, I’m in a great position, and I’m able to use every little inch of my blade to get the right speed.”

“All the conditioning work I did, and all the power work, on and off the ice, really improved [his skating], not just how fast I am, but also just being a strong, powerful skater,” he added. “I’ve improved a lot from the end of last season to now, and I’m excited about that after all the work I put in.”

Whether his skating has improved enough is still a question mark.

“Now is the true test,” said Futa. “Working on his strength, his skating—the knock on him is always going to be his skating—is he fast enough? Will his speed and quickness translate to the next level?”

“He’s challenged himself to be better,” added Futa. “You can still see his touch around the net, but it’s one thing to dominate juniors. Now he’s got to do it at the next level. But you’ve got to push yourself through. You can’t pace yourself at the pro level. There were nights in junior hockey where things were easy for him, and there are going to be nights where, if he’s not pushing himself to another level, pro hockey won’t be easy for him. But if he does that, if he gets quicker, and if he’s competitive every night, he’ll score at the next level.”

Watson is expected to play with the Ontario Reign of the AHL this season.

“I think [Reign head coach Mike Stothers] is going to be really good for him down there, and [Reign assistant coach] David Bell knows him very well, too,” Futa noted. “His first year of pro hockey is going to be a test, and it’s unfortunate that, because of his injuries, he hasn’t been able to [add] the strength that he needs. But he’s in great shape now, he’s excited about turning pro, and if his speed and quickness picks up, you can’t teach what he does around the net. That’ll always translate.”

“If everything had gone smoothly, he would’ve been healthy, trained his upper body, and turned pro last year,” Futa added. “He ended up being a year behind, strength-wise, simply because he couldn’t put in the work in the gym. But he’s in a much better state now. He worked hard all summer, and his fitness results are good. Now we’ll see how it translates. He’s a guy who you should notice in the rookie games, taking it to another level. That shouldn’t be new to him. But he’s got to prove to himself that he can score in pro hockey. That involves consistently pushing himself to another level.”

For his part, Watson seems determined to do just that.

“I want to make a great impression here in camp,” he emphasized. “I was injured last year, so I didn’t get a chance to show what type of player I am, and make a statement. Now there’s a new coaching staff, and a lot of new faces. I just want to make a good impression here, right off the bat, by sticking to my game and showing them who I am. I want stay [in camp] as long as I can, and get ready for the season with Ontario.”