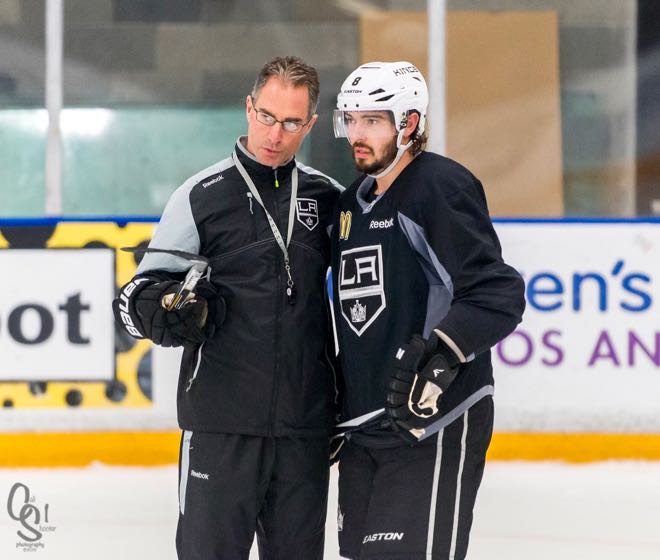 LOS ANGELES — As it was when the Los Angeles Kings introduced Rob Blake as their new general manager, offense, or more accurately, the lack thereof, was the most discussed topic when the team introduced their new head coach, John Stevens, who had been an assistant coach under Terry Murray and associate head coach under Darryl Sutter.

Early in the press conference on April 24 where he was introduced to the local media, Stevens said something that has been plainly evident for a long time: that the Kings don’t get pucks or bodies to the middle of the ice or the front of the net anywhere enough.

“When you look at our team, it’s a well-known fact that we didn’t score enough goals this year,” Stevens told the media gathered at Staples Center in Los Angeles. “That’s been a big topic of conversation. If you look at the analytics, we’re the number one possession team in the league, so we have the puck a lot. I think we were second in the league in shots on goal, which means we’re getting a [high] volume of shots. But what analytics tells us—you have to pay attention to analytics today—we don’t get enough in the middle of the ice.”

For the record, the Kings finished the regular season averaging 31.1 shots per game, ranked seventh in the league. But given that they averaged just 2.4 shots per game less than league-leading Pittsburgh, that doesn’t change what Stevens said about getting a high volume of shots.

“I think there needs to be more of a focus on doing more in the middle of the ice—on the rush, in the zone, getting to the net,” Stevens emphasized. “I think that part of our identity, as a hockey team, is that the LA Kings are a team that goes hard to the net, and quite honestly, if we lead the league next year in coaches challenges for goalie interference, I’d be really happy about that.”

Stevens indicated that analytics confirmed what was so obvious to so many.

“I think the middle of the ice has always been important to this team,” said Stevens. “When you look at the guys we’ve had down the middle of the ice—when we won with [Anze] Kopitar, [Jeff] Carter, [Mike] Richards, [Jarret] Stoll and Colin Fraser before that—I just think that center ice is a really important part of the game.”

Blake went even deeper into the advanced statistics.

“One of the things I did when I sat down with John was to talk about the offensive game,” he noted. “He touched briefly on the analytics that have come into our game, and we need to look at all that, We need to look at where our shots in the offensive zone are coming from, how we’re generating shots off the rush—different things like that, we’ve looked at. We’ve been at the bottom of the league in that over the last season here, so there needs to be an emphasis in the detail on the change in that aspect.”

“I think, down near the end of this season, we started looking at philosophies on the way the game is played,” he added. “You take that in steps, whether you take it from the defensive zone, you take the neutral zone or the offensive zone. Then you start adding the analytics to what you think you’re seeing and you’re either going to be supported or it’ll go against it. I think it supported [what we thought] a lot.”

“We were at the bottom of controlled entry, goals off of controlled entry. We were near the bottom at getting the puck to the slot, whether we were skating it or passing it, so there were a lot of things that, the way goals are being scored now, that we weren’t having success in. So when we talk about a review at the end of the year that comes into play, then we sit and we see what the structure, the system, and the detail that will be influenced to correct that. Whether we’re going to be at the top of the league or not, I can’t say that. But you don’t want to be at the bottom in those categories.”

Getting bodies and pucks to the middle of the ice and the front of the net is just one issue for the Kings. Indeed, the emphasis on speed and quickness throughout the National Hockey League will continue to be a challenge for the Kings and Stevens shared some thoughts about that.

“I just think it’s the transition—how quickly teams go from defense to offense, so when a puck gets turned over it’s how quickly everybody goes the other way, and when a team loses the puck, how quickly they’re trying to get it back,” he said. “It’s just the pace of the game, transitioning from one side of the puck to the other, to me, is as fast as it’s ever been.”

Whatever you do, don’t let all the talk about offense fool you. Stevens has no intention of sacrificing the team’s defensive foundation.

“The success here, and quite honestly, in the National Hockey League, comes from teams that can defend,” he noted. “This team has always taken great pride in keeping the puck out of its net. The reason we’ve been able to win here is that our best offensive players are our best defensive players.”

Like with all things, the changes Stevens and Blake are talking about won’t come instantly.

“I don’t know if I can tell you there’s a button we’re going to push and it’s going to change everything,” said Stevens. “I think we do an awful lot of good things here, I do think the game has changed a little bit, and we’re certainly paying attention to that. The mobility of defense in the game now, and the speed in which teams transition the puck are certainly areas that we’re going to try and get better at.”

“We do want a team that attacks hard to the net and it’s not that we haven’t done that before. But it’s something that we’re really going to focus on.”

Stick tap to LA Kings Insider Jon Rosen for his contributions to this story.