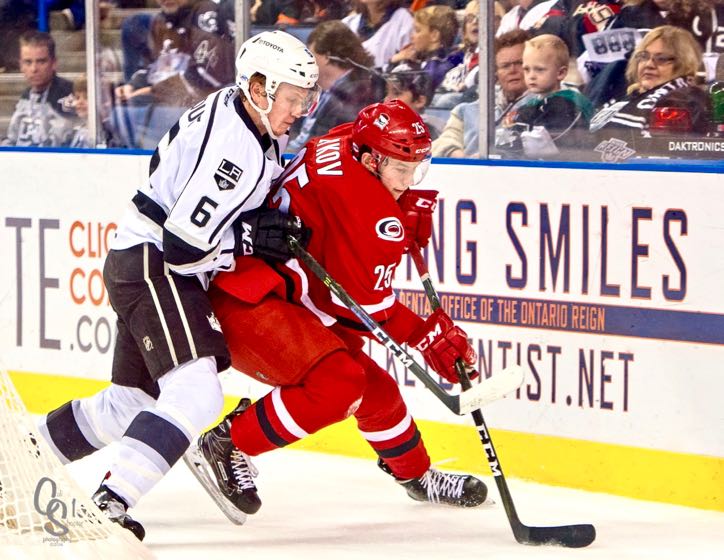 ONTARIO, CA — When Frozen Royalty last checked in with Los Angeles Kings defenseman prospect Paul LaDue, he was busy turning a lot of heads at their training camp last October. In fact, he made such a strong impression that there was a little talk about him making the Kings opening night roster straight out of the University of North Dakota.

But this time, where there was smoke, there was no fire. The Kings assigned LaDue to the Ontario Reign of the American Hockey League to start the 2016-17 season, and so far, the 24-year-old, 6-1, 186-pound native of Grand Forks, North Dakota has played in 32 games, scoring four goals and adding twelve assists for 16 points, with a even plus/minus rating and 18 penalty minutes.

More important, LaDue, who was selected by the Kings in the sixth round (181st overall) of the 2012 National Hockey League Draft, has picked up right where he left off from the Kings training camp, in terms of turning heads.

“You know what,” asked Reign head coach Mike Stothers. “He’s had some ups and downs, which is to be expected from a first-year guy, but man! He makes some plays. He escapes coverage and forecheckers with his feet, he makes good outlet passes, he’s mobile, and he’s getting the puck though [from the point]. He’s changing his release. He’s not just blasting the puck into the shin pads of the opposing players.”

“There’s a lot of composure in that young man,” added Stothers. “He’s good and he’s only going to get better. He’s one of the guys, when I think back to last year—I wish we would’ve gotten him sooner. He came out of school and it was awhile before he arrived with us. Who knows? If [forward Brent] Sutter was healthy and if [Kings forward prospect Jonny] Brodzinski was healthy, if we got LaDue a little earlier, maybe it’s a better challenge against Lake Erie [in the 2016 Western Conference Final]. You don’t like to look back, but the kid’s got a hell of a career ahead of him.”

As is typical of players coming out of major junior hockey in Canada and especially college hockey, the AHL schedule has proven to be a bit of a challenge.

“The main thing is the schedule,” said LaDue. “I’m used to Friday and Saturday games with a whole week off. But here, we’re playing all the time.”

“It’s almost better for the flow of your season,” he added. “I’d say that’s the hardest part—being ready for every game and keeping your body ready and prepared.”

Preparing for games at the AHL level has also been something of an eye opener for LaDue.

“At the beginning of the season, it was tough playing three games [in three nights],” he noted. “But you learn how to take it all in and be prepared for every game. As far as that goes, I think I’ve been getting a lot better at that.”

“You don’t realize how tough the schedule is until you get here,” he added. “That’s one of the harder things coming out of college, but everyone here has been great, helping the young guys. I can’t give our leadership guys and our coaches enough credit.”

Aside from adjusting to the heavier schedule, LaDue indicated that he’s making the adjustments just fine, so far.

“I think it’s been great,” he noted. “We have a great group of guys and it’s easy to play with them. We’re a tight group. Everyone’s friends here. It’s been great, the coaches have been great. All that factors in and makes it easy on the young guys in our locker room, our first-year guys.”

“As far as the transition [is concerned], I think it’s been good,” he added. “We’ve just got to keep moving forward and keep winning games.”

But after making such a strong impression in the Kings training camp, expectations for LaDue were raised rather dramatically. Oftentimes, that can backfire when a young player like LaDue doesn’t make the NHL club’s opening night roster at the time.

“I try not to think about [the resulting pressure],” said LaDue. “You got to take it day-by-day. It’s a long season. Camp was great. I had a good time and I think I learned a lot. You’ve just got to trying to get better, keep trying to improve your game, day in and day out.”

“These coaches do a great job of helping you with that, so it’s been good,” added LaDue. “I don’t really feel any pressure, or anything like that. I just have to keep moving forward and take it game by game.”

Something that’s apparent from watching the Reign is that LaDue has earned the trust of the coaching staff. Indeed, he’s playing in all situations—five-on-five, power play, penalty-kill, first minute of a period and last minute of a period—all the critical moments in a game, all of which indicates that he is making rapid, if not accelerated, progress in his development.

“[Trust from the coaches] means a lot,” he said. “I couldn’t ask for more. I love playing in all situations—for working on my game, that’s great. I love to get out there on the penalty-kill and the power play has been great, too. I’ve been playing really well on the power play. Again, that’s thanks to the coaching staff and the players out there. It makes it easy—playing with good players, and that’s what we have on this team.”

Despite the strong showing through the first few months of his first season in the professional ranks, LaDue has some things to work on before he’ll be ready for the NHL. But as he says, his entire game needs work, something the Kings coaching staff told him when he left their training camp.

“[They talked about] a lot of little things—everything you need,” he said. “It’s a fast game up there. You’ve got to be smart. I think, defensively, the main thing is that everyone up there is so skilled that it’s a different game. You can’t give anyone any time or space. I’ve been trying to work on that down here. Hopefully, it transitions if I get a chance to play up there.”

“[I have to work on] everything, basically,” he added. “You want to get better at everything. You want to work on everything when you’re in practice. There’s nothing in particular [that he needs to focus on]. I’ve got to keep improving on every aspect of my game—keep working hard, keep showing up every day like it’s a game day.”

When told about what LaDue said about what he needs to improve on, Stothers flatly said, “I agree with him. Everything.”

“He’s just a kid,” added Stothers, “We need to get that consistency.”

It was at that point that Stothers, who is known for adding a bit of humor here and there in his comments, went for the joke, even though it was a serious comment.

“One night [LaDue] can look close to a Drew Doughty and some nights he looks like an old Mike Stothers.”

Yours truly was tempted to ask him to elaborate on exactly what an old Mike Stothers looked like, but then I thought of the old saying…

“Discretion is often the better part of valor.”