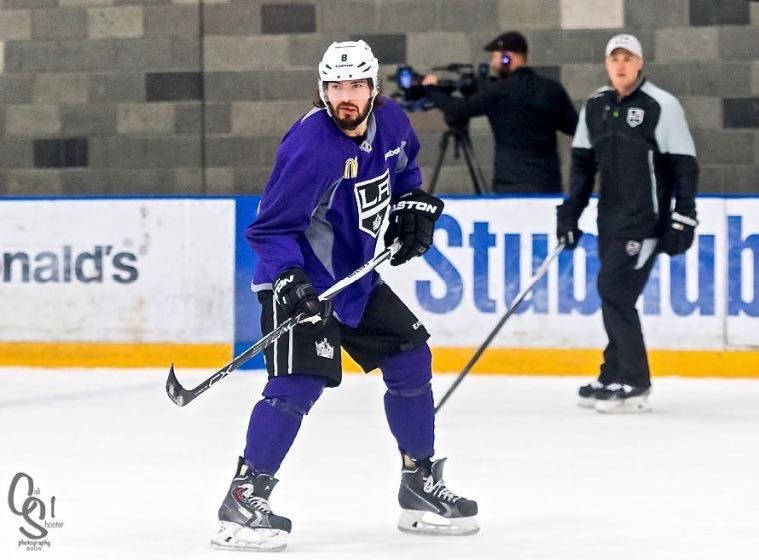 LOS ANGELES — After an embarrassing 4-0 loss to the Detroit Red Wings in front of a sell-out crowd of 18,230 fans at Staples Center on Thursday night, one has to wonder if the team unity and strength of character that the Los Angeles Kings have become so well known for since they won the Stanley Cup in 2012 has begun to fray.

Indeed, the frustration and tension seemed palpable as soon as the game ended.

As soon as the final horn sounded, Kings players skated to goaltender Jeff Zatkoff, as they usually do with whomever is in goal. But Zatkoff, who had been victimized by blatant turnovers and blown coverages by Kings skaters on all four Detroit goals, appeared to want to have nothing to do with that. In fact, he skated straight to the bench—quicker than usual—and into the dressing room, appearing to completely ignore his teammates.

Zatkoff was not available for comment after the game. But defenseman and associate captain Drew Doughty and forward Jordan Nolan spoke to the media and their comments might indicate that the frustration level and tension in their dressing room are high.

“It’s not what we want to be doing,” Doughty noted. “We want to be winning games. Obviously, you’re going to lose one here or there. We want to put a string of wins together, bottom line, but when you’re winning two, losing two, we’re not going to make up any ground in the playoff race. We need to start winning more hockey games than just two in a row.”

“We’ve been too inconsistent, which has been our biggest issue,” Doughty added on December 31. “We’re not scoring enough goals, too. We’ve got to get on some winning streaks and keep it that way, not getting into little lulls where we lose two or three in a row.”

The Kings’ scoring woes are an obvious source of the frustration and tension.

To illustrate, Carter has scored 21 goals this season. Tanner Pearson has ten goals on the season, followed by Tyler Toffoli with eight and defensemen Drew Doughty and Alec Martinez with six goals each. But after that?

You get the picture, I’m sure.

“[Jeff Carter] has been such a big player for us this season,” said Nolan. “But it seems like when he doesn’t score a goal, no one else can find one.”

“This win two, lose two thing is starting to get a little old,” added Nolan. “It’s crunch time here so we’ve got to get some wins.”

“I don’t know if it’s generating more offense,” he said. “It’s more scoring on our chances. We’ve gotten shots and good looks at the net. When we get those, we’ve got to score.”

But do the problems run deeper? After all, evidence suggests that this team’s mental toughness and confidence have, at the very least, been shaken, and we’re not talking about the equivalent of a 3.0 earthquake on the Richter Scale, a tremor that long-time Southern California residents generally ignore.

“We’ve got to become that confident team that we’ve been in the past,” Doughty emphasized. “We need to have fun out there. When we’re thinking and worrying about failure, bad things are going to happen to us, so we’ve got to start getting back on a positive note with a lot of energy, having a lot of fun and believing in each other.”

“We need every single player to look themselves in the mirror and respond. We need everybody to play their ‘A’ game in order to win hockey games. When we don’t, we lose.”

Was Doughty saying that some players aren’t putting in their best effort in every game? Maybe, maybe not. But either way, the results and the personal statistics for several players, including most of their best players, speak for themselves, and they add credence to just one of those conclusions.