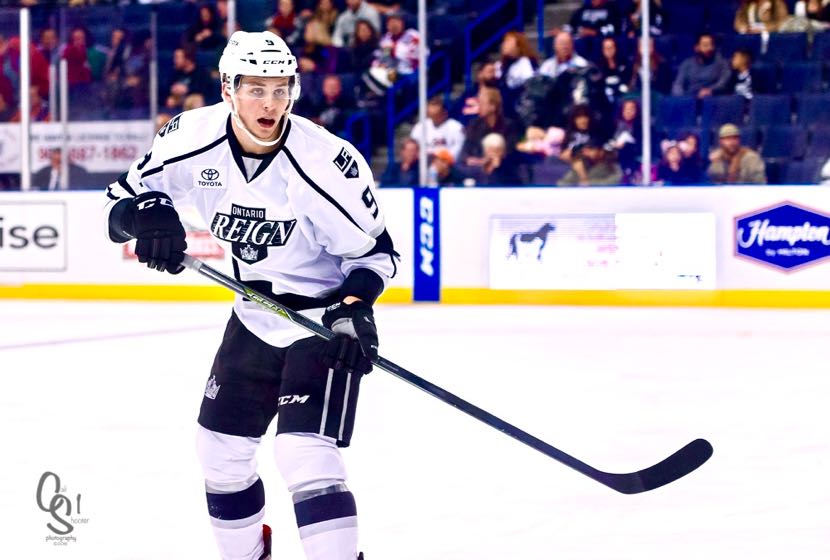 ONTARIO, CA — Looking back at the Los Angeles Kings 2016 Training Camp, highly touted forward prospect Adrian Kempe showed off the speed and raw skill that has the Kings so high on him, not to mention fans clamoring for him to be called up to the big club.

Kempe, 20, was selected by the Kings in the first round (29th overall) of the 2014 National Hockey League Draft. He was a big factor in the 2015 Calder Cup Playoffs with the Manchester Monarchs, then a part of the American Hockey League, scoring eight goals and adding one assist for nine points in 17 playoff games, helping lead the Monarchs to the Calder Cup Championship.

The 6-2, 202-pound native of Kramfors, Sweden, played his first full season in North America with the AHL’s Ontario Reign last year, scoring 11 goals and adding 17 assists for 28 points, with a -1 plus/minus rating in 55 regular season games.

In the 2016 Calder Cup Playoffs, Kempe scored four goals and tallied one assist for five points in 13 games.

Especially with the speed and skill Kempe possesses, more was expected from him last season and as his numbers indicate, he struggled at times, often unable to create space for himself and find the open spots on the ice in the offensive zone. But what stands out even more is that on a team known for its defensive prowess, Kempe earned a -1 plus/minus rating.

As reported earlier, Kempe was a bit of an attention-grabber during the Kings training camp back in October, enough for fans to call loudly and frequently for him to make the big club’s roster, enamored with his speed and high skill level.

Despite that, and even though he got a long, hard look during training camp, Kempe was assigned to Ontario to start the 2016-17 season, and so far, the Kings have been proven right, as he has struggled—that might be putting it mildly—scoring just three goals with two assists for five points in 16 games. Even worse, Ontario is once again a solid defensive team, but Kempe has a -4 plus/minus rating.

To his credit, Kempe knows that he has to be better, even though he attributed some of his issues to bad luck.

“I’m really not that happy with my play, so far.” he lamented. “But hopefully, I can get better. I’ve got to put a lot more work in and put in more time after practice to work on everything. It’s not good enough right now. Hopefully, it gets better.”

“I think I’ve created a lot of [scoring] chances, so far. I definitely should have more than five points. I’ve just had a tough time. I’ve created as many chances as I did last year [at the same time]. I also want to better in front of the [opposition’s] net. I have to score from [in front of the net].”

During training camp, the Kings had Kempe playing center after spending the 2015-16 season almost exclusively on left wing. With the Reign, Kempe played center until their December 3 game against the Charlotte Checkers where he was moved back to left wing, an apparent move to jumpstart his play.

“I played the whole [training] camp at center,” he said. “I think I play pretty well at center and on the wing. I just haven’t played good enough this season.”

“He’s got five points, so, no,” he emphasized. “He needs to be a factor on every shift and [in] every game. You don’t go to Baskin-Robbins and order vanilla ice cream, do’ya?”

On the defensive side of the puck, Kempe has not shown significant improvement since last season.

“There’s a lot of room for improvement [on defense],” Stothers noted. “If you’re not scoring, then you better be really good defensively. It’s a challenge for that young man but he’s only 20 years old. Again, it’s part of the process. With all those expectations you want some results. 16 [games] becomes 20. 20 becomes 25.”

“I need to be better in the defensive zone,” said Kempe. “I haven’t been good enough there this season. I just have to work on everything in order to take it to the next level.”

To be sure, in the first two months of the 2016-17 season, Kempe has been anything but impressive and he has not shown improvement over last season. On the other hand, he’s a very young player, just 20 years old, in just his second full season in the professional ranks.

As such, although it is clear that he is not ready for the NHL at this time, and that it is likely that he is at least a year away, it’s not time to panic regarding Kempe’s development.

“He’s going to be fine,” said Kings Vice President of Hockey Operations and Director of Player Personnel Michael Futa. “It’s part of the process. Going down there, competing and scoring on a regular basis—that’s something we need from him.”

But as reported earlier, that is not what they’re getting from Kempe now, not even close.

“I think, ‘struggling’ is a good term [to describe Kempe’s play],” said Futa. “I think anytime a kid has success in training camp and then goes down to the minors there’s an adjustment, mentally, to challenge himself to play at the same level, the same caliber, every night.”

Kempe said that not making the Kings roster out of training camp has not been a factor in his play.

“I don’t think that’s affected me,” he noted. “I had a good camp, and it was disappointing to get sent down. Of course, you want to play in the NHL. But I just have to put in more work down here to show that I can play up there. I just need to be better if I’m going to make it to the NHL.”

But in order to play in the NHL, like any other NHL prospect, Kempe has to show that he can play up to or beyond expectations where he is now. In other words, first things first.

“It’s not any kind of pity party,” Futa emphasized. “You just go down and work hard. They’ve had great success down there. He’s still a very young player who has to develop. He’s got an element of speed that’s very intriguing.”

Looking back at what Kempe said about creating scoring chances—his perception runs counter to what Stothers and the Kings’ front office are seeing—although it was just one game, it left this observer wondering if there was a disconnect between what he thinks he has to do in his development and what the Kings want.

“You want him to have more scoring chances, but he had a couple that he should’ve buried,” said Futa. “But that’s part of the process of learning how to score consistently, put up numbers at the AHL level and be a huge part of the success down there.”

“I was there the last two nights, [December 2, a 4-1 win over Tucson and December 3, a 3-2 win over Charlotte], and he had tons of opportunities to succeed,” added Futa. “He’s just got to push and push and push through to where it’s an easy decision. Then, it’s time to come up [to the Kings].”

Futa indicated that intensity is part of Kempe’s problems.

“It’s certainly not the speed of the game,” he said. “I thought, the last couple of shifts of the Friday night game, he brought a physical element to the game that was just off the charts. I thought that was one of his better games at any level. He threw a couple of big checks on Tinordi and got physical at the end. That’s the way he’s got to compete, night in and night out.”

“It’s maintaining the intensity that’s expected [with Ontario],” he added. “When that’s met down there at a consistent level, it’s rewarded [at the NHL level], but it’ll be the same thing. It’s not going to get any easier playing for [Kings head coach] Darryl Sutter. He’s going to be challenged on a nightly basis to be better, to use his speed as a threat.”

That’s something that Kempe, who Stothers said is the fastest player in the AHL, isn’t doing consistently.

“If you go to games and you don’t see his speed as a threat, that’s how I would gauge a successful game for him,” said Futa. “If you’re blown out of your seat that he’s got the puck, he has speed through the neutral zone, he’s making plays and the puck is on his stick, you know he’s having an ‘A’ game. But if you’re looking for the speed, you know he’s having an off night.”

“All that comes as part of being a pro,” added Futa. “He’s in year three now, still a very young player. But it’s that mental toughness to challenge yourself to make an impact on a nightly basis.”

“There’s no secret that he’s been talked to about what’s expected,” Futa noted. “He’s fully on board with it. But it’s about meeting the challenge of being part of a team that’s successful. It’s a close-knit group, as [the Kings] are. There’s a way that we play. He brings an element that’s really intriguing up here, but he’s got to be a dominant player down there before the carrot is going to be handed to him.”

“That [goes for] any player, not just Adrian Kempe,” Futa added. “Nobody tries to put you in a situation to fail. So you look at his incredible assets, as a player, that he showed at the international level, that he showed in a playoff run when they won the Calder Cup, and you try to build on those areas, whether they have him playing the middle and looking at the way an L.A. Kings center plays and what they’re supposed to do.”

“The majority of [young] players who succeed are kids who understand the path that’s been set for them. Even on nights where it’s tough and it’s not going well for you, you still fight through that, make the best of the situation and play the way you have to play.”

“Depends on what I’m in the mood for,” I replied.

At that point, Stothers sighed and frowned.

“Well then, you’re not playing for me,” he said with a rather disgusted tone. “Put some bloody sprinkles on it, or something, will’ya?”

It was at that moment that Stothers gave me a wry smile. Laughter ensued.

That was probably one of those moments that you had to be there for, but for the media present, it was a humorous moment.