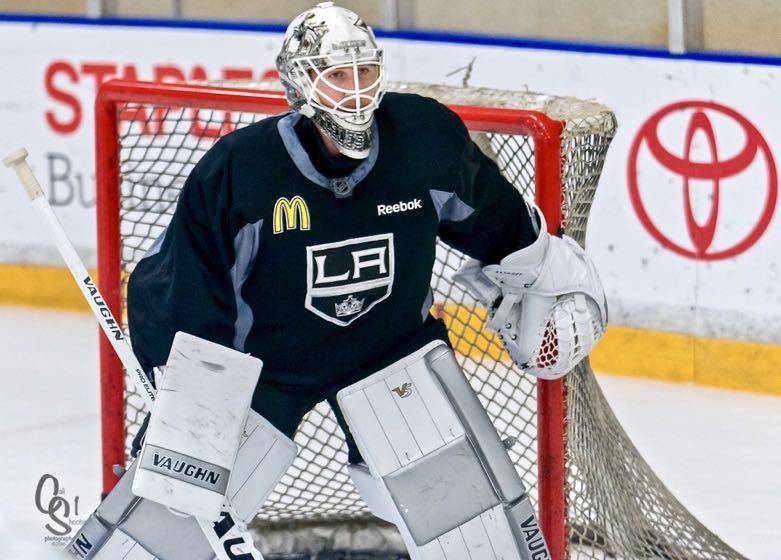 EL SEGUNDO, CA — For Los Angeles Kings faithful, if the name “Jeff Zatkoff” doesn’t ring a bell, beyond the fact that he played for the 2016 Stanley Cup Champion Pittsburgh Penguins, it should.

Although Zatkoff’s numbers improved every year in three seasons with the American Hockey League edition of the Manchester Monarchs (2009-10 to 2011-12), both Bernier and Quick passed him on the Kings depth chart, and especially noting Quick’s success, it was clear that his road to the NHL was not going to go through Los Angeles.

After the 2011-12 season, the year the Kings won their first Stanley Cup, Zatkoff knew he had to move on, and he signed an unrestricted free agent contract with the Penguins.

“At that point, I had been here four years, and they had so many goalies,” said the 29-year-old, 6-2, 179-pound native of Detroit, Michigan. “It wasn’t only Bernier and Quick. They had [Martin] Jones coming up, too.”

“As much as you want to be on a team that wins the Cup, you’ve got to get there first and I felt, for my career, at that point, I had to go to a place that wasn’t as log jammed in goal, and I had an opportunity to go and establish myself in the NHL,” added Zatkoff. “I owe a lot to L.A. I’ve said it from the time I left: they’re the ones who developed me and put me in a spot where I could go somewhere else and make it to the NHL. Pittsburgh gave me that opportunity. I had another great goalie coach there.”

With the Penguins, Zatkoff eventually got the opportunity to backup Marc-André Fleury, but during last season’s playoffs, young netminder Matt Murray stole the spotlight, helping lead the Penguins to a Stanley Cup Championship.

That left Zatkoff on the outside looking in with the Penguins, in terms of a spot on their NHL roster, an all too familiar situation for him.

“It’s the NHL, and someone always wants to take your spot,” he observed. “They had a young kid come in and play really well. Sometimes, things like that happen. For me, fortunately, I was able to stay with it and get into a game in the playoffs and play well.”

“It was a frustrating year,” he added. “I’m not going to say it was all smooth. But in the end, being able to win [the Stanley Cup] and to be part of that team was something special.”

As is the tradition, Zatkoff got his day with the Stanley Cup this past summer.

“I took it to North Carolina,” he said. “I’ve lived there since college. It was really low-key. We went golfing with it, with family and friends. Golfing, a barbeque and pool party. We went out to a bar afterwards. Nothing too crazy. I tried not to let it get too big because you want it to be there with your friends and family. You want them to be able to enjoy it.”

Sharing the Stanley Cup with family and friends is much of what a player’s day with hockey’s version of the Holy Grail is all about.

“It really is,” said Zatkoff. “When you win, the first days and weeks are for you, the team, and everyone associated with it. By the time you have that day, it’s more fun watching everyone else be able to enjoy it, look at it, see it, and all that. I feel like that’s what that day is more about.”

“We’ve got the same group of friends, [Kings defenseman] Alec Martinez and I. It’s funny. We were all laughing because they’ve gotten to celebrate with the Cup three times in the last five years. I think they’re getting spoiled, a little bit.”

Also this past summer, Zatkoff enjoyed a homecoming of sorts, signing a two-year, unrestricted free agent contract with the Kings valued at $900,000 per year on July 1, 2016.

“It’s funny how things kind of come full circle,” he said. “When I heard there was an opportunity to come back here, that was my first pick, not only because I’d get to work with [Kings goaltending coach Bill Ranford], but to be with the guys, and pay back the organization that put in time in developing [me]. I’m reaping the rewards.”

“It’s exciting,” he added. “It’s a little bit of the same, and a little different. Obviously, the facilities are different. I think there’s a comfort level here, being able to work with Billy, with [President/General Manager Dean Lombardi] here and just some of the familiar faces. I know a lot of the guys here already.”

“Sometimes, it can be challenging, coming into a new locker room and being yourself right off the bat. I feel like I have that base where I can come in and be myself and really get to know the guys better.”

After backing up Fleury with the Penguins, Zatkoff is now in a similar situation behind Quick with the Kings, which is always hard on a backup goaltender. But Zatkoff knew what he was getting into and it is what he wants to do at this point in his career.

“That was my goal when I signed here,” he emphasized. “That’s what I want to do. I was fortunate to play with Marc-Andre Fleury in Pittsburgh, and now Quick, two of the best in the league and they’re not just great goalies. They’re great guys.”

“I know what my role is,” he added. “Everyone wants to play a lot, but I’m playing behind, arguably, the best goalie in the league, so I want to make sure that I’m a good team guy, a good locker room guy, work hard and when I get my opportunity to play, I deliver with some wins. So I’m excited. It’s funny how things come full circle, but to be able to be back here, in this room, and finally be able to put on that sweater in a meaningful game is a special moment that I’m looking forward to.”

That’s exactly what the Kings are looking for from Zatkoff.

“He’s gone through it in Pittsburgh, being the number two guy, having a guy in front of him who plays a lot, like [Quick],” said Ranford. “He knows what his job is. When we talked this past summer, he realized what his job was, and that’s to be ready whenever he has to go in, but basically be the guy who’s going to do the extra work, and be a real positive guy in the dressing room. That’s what we need.”

“[Playing so few games is] hard,” added Ranford. “It’s hard, and that’ll be the responsibility of myself and him to be sure we find a way to keep him ready. It’s a challenge for when you do get your start to be as relaxed as possible and not be too charged up. You also have to be careful with the maintenance of his schedule. We can’t kill him in every practice, and then, when he does get his start, he doesn’t have enough energy to play. You’ve got to walk that fine line by making sure he’s getting enough work, but not so much that when he does get to play, he’s worn out.”

Ranford indicated that Zatkoff is now a more polished version of the goalie he developed and worked with through the 2011-12 season.

“Technically, [his game is unchanged],” Ranford added. “He’s just a little more mature about his game, more experienced. He’s now reading as opposed to reacting. That’s the biggest difference. He’s also more confident in what his abilities are and that comes with maturity.”

“A lot of the things that we worked on before he left us—the detail of his game is still there, and that’s what I was happy about. There’s not really a lot of tweaking of his game [that’s necessary], as far as what my expectations are. Both Dusty [Imoo, who handles goaltender development for the Kings], and I have had the opportunity to work with him in training camp, and I’m looking forward to continuing the relationship.”

Much of the growth in Zatkoff’s game has comes with experience.

“There’s just a maturity,” he said. “You just develop, as a person, both on and off the ice. I think I’ve experienced more of those ups and downs, not only when I was here, but with Pittsburgh, like I had last year—a little adversity. I’ve been able to overcome it. It makes you stronger, mentally. That’s the biggest thing for me. I’ve grown, on the ice and off the ice. It’s how you meet challenges as they arise, and how you overcome them.”

“There’s more confidence, having played in the league for a couple of years. I get excited every year, especially now, with a new team, I’m ready to go.”

LA Kings center prospect Rasmus Kupari, who was selected by the Kings in the first round (20th overall) of the 2018 NHL Draft, made his NHL debut on March 5, against the St. Louis Blues.
Pardon? #LAKings #Flames
#LAKings
Saw this coming. There was no intent, but Strand should've received a major penalty for that very careless and dangerous play. #LAKings
Can’t say it more succinctly than the title of my latest story...Austin Strand (@strander17) Has Been a Pleasant Surprise for @LAKings.
An @lakings game has been postponed...
Sidelined by a leg injury suffered during Team USA’s run to the Gold Medal during the 2021 World Junior Championship tournament, which ended on January 5, Los Angeles Kings center prospect Alex Turcotte, their first round pick (fifth overall) in 2019, has been chomping at the bit to get back on the ice.
The @LAKings have certainly given their fans reasons to be optimistic, along with causes for concern...to read some analysis, click on the link in our bio.
This is a good one! #LAKings