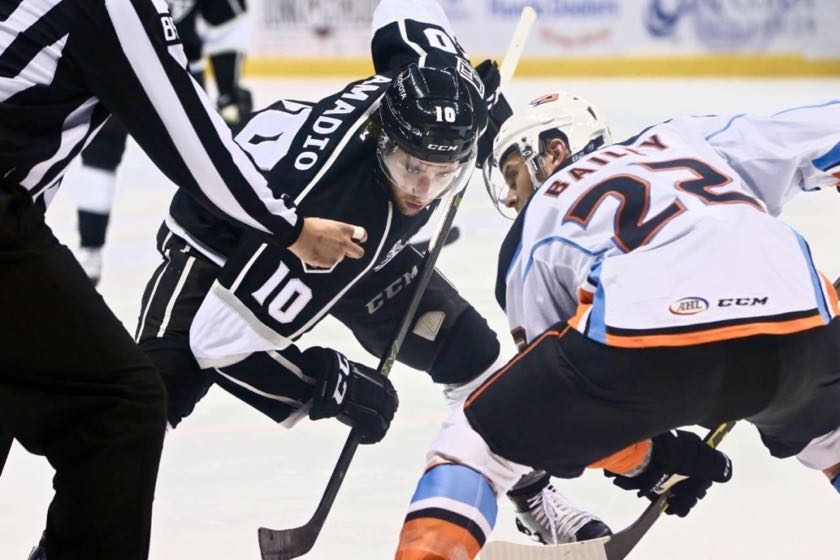 LOS ANGELES — When center prospect Michael Amadio was called up from the North Bay Battalion of the Ontario Hockey League late last season, he went from playing more than thirty minutes per game in the OHL to fourth line minutes with the Ontario Reign of the American Hockey League, the Los Angeles Kings’ primary minor league affiliate.

Indeed, after scoring 50 goals and adding 48 assists for 98 points with a +30 plus/minus rating last season for North Bay, Amadio found himself stuck on the Reign’s fourth line in the first round of the 2016 Calder Cup Playoffs. But that changed quickly.

“It didn’t take him very long to win over [Reign head coach] Mike Stothers in every facet of his game,” said Kings Vice President of Hockey Operations and Director of Player Personnel Mike Futa. “He went from being a fourth liner to being on the ice with the goalie pulled late in the AHL playoffs. That’s a credit to him and his ability to adjust.”

Not only did Amadio jump from the fourth line to getting top six minutes, the 6-0, 190-pound native of Sault Ste. Marie, Ontario did so in the span of just eleven playoff games.

The biggest reason for that was not his goal scoring prowess. Rather, it was the fact that he was already responsible defensively, a rarity for a young player fresh out of college or major junior hockey in Canada.

“A kid like Amadio—playing for [Battalion head coach] Stan Butler for years—it’s not that other coaches don’t [pay] attention to teaching play away from the puck,” said Futa. “But they play such a tidy, defense-oriented system that when you get a kid out of Stan’s organization, you’re shocked if they’re not really sound defensively already.”

“My first year [in junior], I learned that there’s more to the game than just offense,” said Amadio, who was selected by the Kings in the third round (90th overall) of the 2014 National Hockey League Draft. “My coach really made sure that I was responsible in my own end before I was able to do anything in the offensive end. He really preached that. I tried to implement that in my game because I knew that at the higher levels, that’s what teams want. They want guys who are able to play in their own end—a two-way guy, not just one who can only play in one zone.”

As reported earlier, Amadio was called up to Ontario for the AHL playoffs last season, and in eleven playoff games, he scored a goal and added four assists for five points, with a +3 plus/minus rating.

“It was unbelievable,” Amadio said about his brief stint in the AHL. “All the guys and the coaching staff were really welcoming. They made the transition really easy. They made me feel really comfortable, which was the biggest thing. I could come in, play my game, and not worry about all the other things.”

Making the jump from the OHL to the AHL, Amadio immediately noticed how much faster everything is.

“You can definitely tell that the pace is faster,” he noted. “In junior, you have a little more time to make plays and find the open guy. But [in the AHL], you have to do what you’re going to do with the puck before you even get it. You have to know where everybody is on the ice and that’s the biggest thing. If everyone does their role and does what they’re supposed to do, it makes it a lot easier to find teammates because everyone’s in the right place, and that makes it a lot easier to make a play. But the pace was definitely a lot faster.”

“The guys were very talkative on the ice, letting me know where they were,” he said. “If I was a little out of position, there was always someone covering for me and telling me where to go and stuff like that.”

With the added speed comes greater strength of the players at the AHL level.

“I think I did pretty well [holding his own, physically],” Amadio added. “I just tried to win my one-on-one battles when I could. If I lost it, I worked twice as hard to get the puck back.”

As reported earlier, Amadio made the necessary adjustments and quickly earned top six minutes in key situations, largely because of his defensive awareness, after being relegated to the fourth line to start his stint with the Reign.

“I think [his defensive play with Ontario] worked out really well,” he noted. “I think I did a good job when I was there of being responsible in my own end, doing all the little things.”

Nevertheless, challenges remained, including learning that even 50-goal scorers in junior hockey have to get their noses dirty at the AHL and NHL levels if they want to put the puck in the back of the net.

“I think I was OK [at going to the front of the net],” said Amadio. “I could’ve done better. In [the AHL], there’s a lot more guys who are willing to go to the dirty areas to score the goals. I don’t know if it was just me, but I didn’t see a lot of that in junior. But there were a lot of guys on the [Reign] who did that, and that was a little new to me. I definitely tried to put that in my game. Hopefully, it’ll work out for me.”

Another challenge, as alluded to earlier, was adjusting to playing a lot less than he did last season at North Bay.

“Mentally, I think he got into some bad habits because he was playing so much and he had to do so much that he had to pace himself [with North Bay],” Futa noted. “That was one of the biggest things. I said, ‘you’re going play with the Ontario Reign and you’re going to get twelve minutes a night. You’re going to wonder what happened. You’re not playing your 32 minutes a night in junior hockey where you have to pace yourself.’ Now he’s got to go all out every second because the shift you take off could be your last.”

Skating, speed and strength are the aspects of the game the Kings want Amadio to work on the most.

“He now knows that there’s another level of speed,” said Futa. “I think his skating needs to be better.”

“They want me to focus on getting faster and stronger,” said Amadio. “Those are the two biggest things. I workout for an hour a day [this summer] and then I’m on the ice for an hour, an hour-and-a-half.”

Amadio also has a weakness in his game that must be corrected.

“He reminds me a lot of a deficiency [Philadelphia Flyers and former Kings right wing] Wayne Simmonds had when he first arrived,” Futa explained. “He skated with the puck out in front of him and tried to beat guys entering the zone and was easily poke-checked. Now he puts the puck around the defenseman and goes back and gets it. He’s now one of the best puck protectors in the National Hockey League.”

“Amadio has to get over trying to beat someone off that initial rush with the puck directly out in front of him,” Futa elaborated. “He’s good enough to do that in junior, but that just gets tipped and whacked away at the AHL level, so that’s a non-starter in the NHL.”

“Those are the little things. But again, his progress—I couldn’t be more pleased with how far he came, and then, to make that step, how quickly he won over [Stothers], and he hasn’t really had full access to our development guys yet, and we all know what happens when they get ahold of them.”

Given Amadio’s ability to play on both sides of the puck, his versatility could give him multiple avenues to making it at the NHL level.

“That’s part of the thing with all of these guys,” said Futa. “If they buy in—and this is a general thing, not specific to one player—if they buy into all the options and boxes they have to check off to give themselves a chance to play in the National Hockey League, whether it’s for [Kings head coach] Darryl Sutter, or anywhere, it’s the ability to buy into a complete role, not just, ‘hey! I’m a goal scorer.’”

“They have to understand that they have to be neat and tidy with attention to detail away from the puck, and a guy like Amadio is a tremendous penalty-killer,” added Futa. “I’ve never seen a kid, last year, who got under so many sticks and broke up so many plays just by being in the right spot.”

“I think there’s a chance for him to be, and we’re not heaping pressure on him by any stretch of the imagination because there’s too much there. But to have a guy you get in the later rounds who has a chance to kick tires on top six minutes [is huge].”

Amadio will participate in the Kings rookie camp in September, where he hopes to show the Kings brass that he has improved significantly since last season.

“I just have to play my game and step it up a little bit,” he noted. “I just want to play my role and not do too much because that’s when you start to make mistakes and things aren’t going to go your way.”

“I’ll just keep things simple, play my game and hope for the best.”