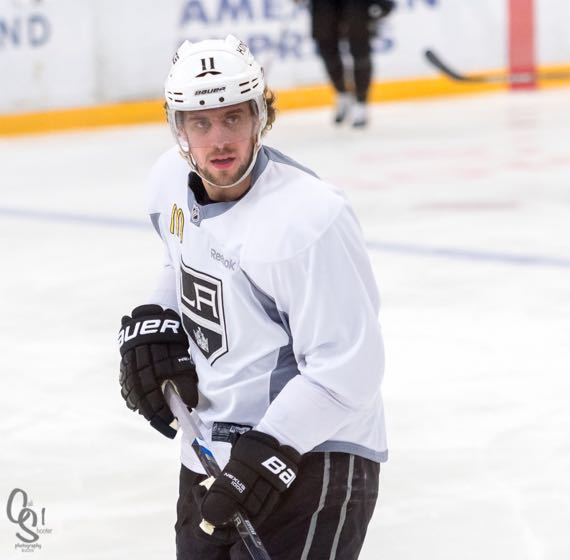 EL SEGUNDO, CA — Although one could easily make a case for Drew Doughty or Jonathan Quick as the biggest reason that the Los Angeles Kings have been one of the very best teams in the Western Conference this season, center Anze Kopitar can put in his own claim as well after putting the team on his back, especially in the last 42 games.

Despite what the numbers indicate, Kopitar insists that he’s not doing anything different.

“I think it’s just my comfort level on the ice,” he said. “When the season begins, you always want to get off to a good start and then, when things aren’t going well, you try to do more and more, and that backfires on you, sometimes. But once you really settle into a comfort zone, things just come more naturally than when you push the envelope.”

Kopitar was signed to a seven-year contract extension with an annual average value of $10 million/year on January 16. But even though the signing came not long after he began his torrid pace, Kopitar denied that his contract situation was a major factor in his performance.

“You want to isolate yourself as much as you can and not be bothered by it,” he noted. “But we’re only human. It’s going to get to you, at some point. You just don’t know what’s going to happen, at first. But at the end of the day, you realize that it is a business, and everyone’s trying to do the right thing. Sometimes, things tend to drag on longer than, maybe, they need to, or should. Again, it’s a part of the business, so it’s not a big deal.”

“It could’ve been a bigger distraction for me,” he added. “But I thought I handled it pretty well. I really wouldn’t change a whole lot—the way I handled it.”

“Kopi’s been playing great all year,” said right wing Tyler Toffoli. “Everyone was all over him at the start of the year for not scoring goals, but people don’t understand everything else he does. It doesn’t really surprise anybody in this room that he’s playing the way he is, and it’s not just scoring. He’s doing everything.”

“He’s getting rewarded, offensively, but there’s the things he does defensively,” said defenseman Luke Schenn. “He plays in all situations. He plays big minutes against other team’s top centers and defensemen in every game.”

“He’s always in the right position,” added Schenn. “That’s one thing I’ve noticed. He’s always got the puck, too, and he makes everyone around him better. Once he gets the puck—you’re not going to knock him off the puck. You’re better off playing off of him. If you’re the opposing team, it’s better to pick up guys around you. That said, he finds guys, but if you give him too much space, he’ll take it to the net himself, too. He can shoot the puck.”

Left wing Milan Lucic also indicated that he didn’t really know how good Kopitar really was until he played with him this season.

“I hadn’t played against him a lot [being in the Eastern Conference, before joining the Kings],” Lucic noted. “Once you play with a guy like that, you really appreciate the talent that he is.”

“He wants to score, he wants to play good defense, and he wants to be a big part of the team,” Lucic added. “That’s big reason why he’s a champion, and potentially, a Selke winner this year. He’s just a great, all-around player with great, all-around skill. He’s enjoying himself, the way that he’s playing. He loves being a King, and being a good teammate, and that’s what you expect from a guy like him.”

“I knew he was really good, but you don’t get to see him that much when you’re in the East,” said center Vincent Lecavalier. “Everyone knows he’s committed, defensively. But how good he is offensively—I knew he was good, but he really controls the game. I’m very impressed by what he’s done, and what he is to this team—how much he’s contributed. He’s a big part of this team, for sure.”

“It’s just the way that he’s able to control the pace of the game, as an individual, not just in the offensive zone, but in the defensive zone, and the neutral zone,” said Lucic. “He’s got that ability to take the game over, all by himself.”

Schenn was impressed enough to take his praise a big step further.

“He’s been incredible and that’s another guy where, when you’re playing in the East, you get to see him once or twice a year,” Schenn noted. “Playing with him, you definitely appreciate how good he is a lot more, and I don’t think he necessarily gets the recognition he deserves. When you play with him on a night-to-night basis, I don’t know if there’s a better center in the league.”

“The impressive thing is the consistency, on a nightly basis, and the combination of skill, power, strength, and his competitiveness,” Schenn added. “He’s as good a player as I’ve ever played with, for sure.”

Head coach Darryl Sutter indicated that, as one of the team’s leaders, Kopitar is merely doing his job as one of the Kings’ captains.

“On our team, the top players are also the captains, so it goes hand-in-hand,” he observed. “It’s a lot of responsibility for Kopi. But that’s good responsibility, and it’s good pressure. [The players] trust him on and off the ice, so we expect him to be a top guy in both of those areas. He’s a top player on the ice, and he’s one of our captains.”

“I pride myself on [putting the team on his back],” he said. “I want to be one of the go-to guys who gets it done every night, [one of the players who is] depended on every night. I’ve been doing that for the last few years, and I definitely don’t want to change that.”

“It’s a challenge that I’m willing to take on. I just want to be a little more consistent. I think things, in general, have been pretty good. But there’s still room for improvement.”