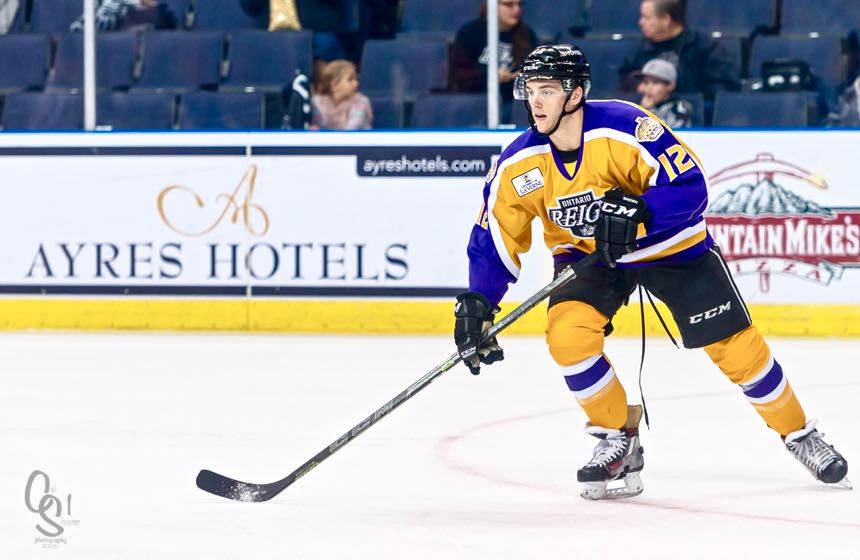 ONTARIO, CA — Although he is not expected to don a Los Angeles Kings jersey anytime soon, the Kings just might be developing a sniper in their farm system.

Ontario Reign right wing Jonny Brodzinski (he can also play at center), who was selected by the Kings in the fifth round (148th overall) of the 2013 National Hockey League Draft, played three seasons for St. Cloud State University, where he scored more than 20 goals each year, and was nearly a point-per-game player in his last two seasons.

But will the 22-year-old, 6-0, 202-pound native of Ham Lake, Minnesota be able to replicate that at higher levels?

So far, that has not been the case at the American Hockey League level, although for a first-year pro, such expectations are unrealistic for all but the cream of the crop of prospects coming out of major junior hockey in Canada, or the collegiate ranks.

Nevertheless, Brodzinski isn’t happy with his eight goals and six assists for 14 points, a +7 plus/minus rating and ten penalty minutes in 41 games this season with the Reign.

“As easy as it seems, [his biggest challenge this season has been] putting the puck in the back of the net, just bearing down on some of the chances I get,” he lamented. “That chance [on February 5] off the pass from [Kings forward prospect Adrian] Kempe—the goalie just got his glove on it. There was one in Stockton [on January 27] where the puck trickled over to me. I had a wide open net, but shot it high. It’s just little stuff like that. If I capitalize on those chances, it could change everything.”

Although there was a bit of frustration in Brodzinski’s voice, he knows that he cannot let it get to him.

“You’ve just got to block it out,” he said. “I knew it was going to be a lot tougher than college. I’ve heard that from everybody. But it’s something you’ve got to deal with. You’ve just got to keep plugging away. Pucks will find the back of the net if you’re getting your chances.”

“Any chance you get, you’ve got to throw the puck on net,” he added. “You see how many [goals are scored] off shin pads, or off of a defenseman’s jersey, so you have to keep shooting.”

As Brodzinski indicated, he has been getting his share of quality scoring chances.

“It’s tougher to get those [quality scoring chances] in this league, but that’s something that I pride myself on,” he noted. “I think I’ve gotten a lot of chances. I’d say that I’ve had among the most on the team.”

“It’s about getting into those dirty areas, doing the hard work and just creating things for my line—going into the corners and getting pucks out to the defensemen, going to the net,” he added. “That gets harder and harder at every level because the defenders are a lot bigger, a lot stronger. It’s tough.”

Like so many players in their first year in professional hockey, this season has been an eye-opener for Brodzinski.

“I feel like there’s definitely a learning curve, for sure,” said Brodzinski. “It’s a different league than college. It’s a lot faster. You’ve got to make plays in traffic a lot more than in college, especially at St. Cloud, where we had the Olympic size rink. But it’s something that I’ve adapted to in the last couple of months, so I feel like it’s going pretty well now.”

“In college, you can often just float [in the defensive] zone,” added Brodzinski. “You can’t do that here. You’ve got to lock down a lot of different areas that you didn’t have to in college hockey.”

Brodzinski also pointed to one of those “little things” that hockey players talk about that’s really not so little, one that will eventually help him get his name on the score sheet a lot more.

“I think I’ve just become a more complete player,” he said. “The defensive aspect, especially with [Reign head coach Mike Stothers]—he harps on a lot of things, but the biggest one is facing the play at all times.”

“It’s really a big thing,” he added. “I used to sweep away from the play, making myself unavailable for my defensemen or wingers. You can’t do that at this level. You’ve got to stay open for the play. By doing that, it creates a lot more opportunities for everybody. It’s an awareness that you’ve got to learn.”

This season, Brodzinski has bounced around a lot, playing with a multitude of different line mates. But that isn’t because he hasn’t been able to find a niche with the Reign, or because of something he’s not doing well, or anything like that.

“He’s a guy who can play who can play on a lot of different lines,” said Stothers. “He’s not pigeonholed into one line, or one category. I think he does a lot of things well. Although he got off to a slow start before he scored his first [goal], he’s a goal scorer, just because of the way he can shoot a puck, his release, his nose for the net. I think [the goal scoring] is going to come, in time.”

As Brodzinski mentioned earlier, he has had his problems putting the puck into the back of the net.

“Consistency [is an issue for him], which is something you deal with with a lot of young players,” Stothers noted. “Maybe the fact that I do move him around quite a bit from line-to-line—a lot of young players might look at that and think, ‘oh jeez, I’m not here, I’m there,’ and everywhere else. Maybe if he had a little bit more experience he might think, ‘coach is trusting me in this situation,’ or, ‘coach wants me to play with these guys tonight.’ That’s just my experience, because I’m older than him, quite a bit older than him.”

“This guy is pretty valuable,” Stothers added. “We can play him in a lot of places. He’s been very good. I think it’s just a matter of experience and him getting some minutes, getting some touches. Can he be a little better in the defensive zone? Sure. Can he have better finish in the offensive zone? Sure. But I think you noticed, at the end of the game [a 3-2 win over the San Jose Barracuda on February 6 at Citizens Business Bank Arena in Ontario], I was using him with Kempe and [forward Kris] Newbury, so there’s some trust building.”

“He’s just become a pretty reliable player. Usually, when a coach uses the word, ‘trust,’ and you’re using him in situations, that means huge growth. You know what? I think there’s a lot of potential there. I’m a real big fan of his.”