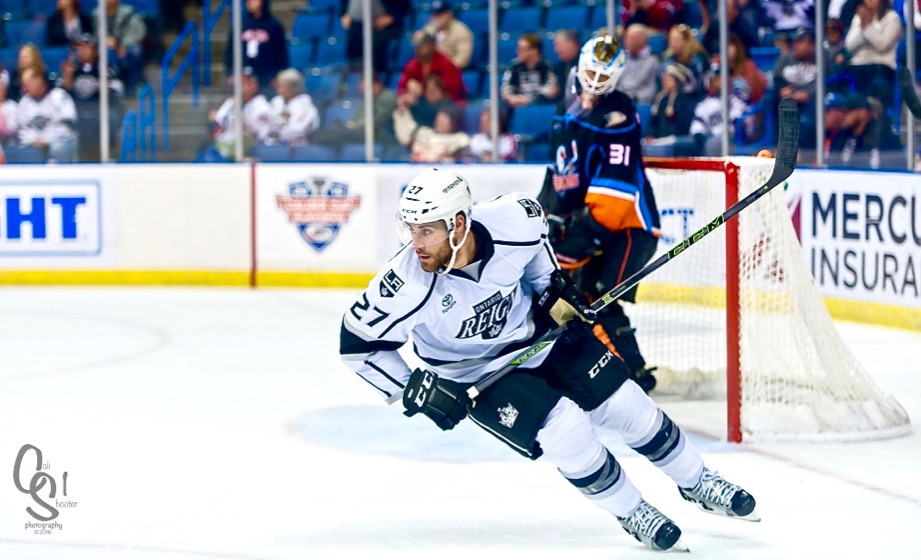 EL SEGUNDO, CA — For many National Hockey League rookies, it takes dozens of games, often a lot more than that, for them to record their first NHL point, let alone score their first NHL goal.

The 6-2, 218-pound native of Park Ridge, Illinois scored his first NHL goal and tallied his first NHL point at the 5:42 mark of the second period on December 29, helping lead the Kings to a 5-2 victory over the Edmonton Oilers at Rexall Place in Edmonton.

Mersch, whose game is trademarked by his net-front presence, scored the goal in typical Michael Mersch fashion, as he won a loose puck battle in the right corner, and then took the puck straight to the front of the net. Using a power move, he took the puck to the goalmouth and slid it between the leg pads of Oilers goaltender Cam Talbot.

“It’s awesome,” Mersch told LAKingsInsider.com. “You work your entire life, first, to get here, and then when you score, and it’s the way you’ve been scoring throughout your career. It shows that your game is applicable to this level.”

Looking back to when he got the news that he was going to get a chance to play for the big club, Mersch, who spoke exclusively to Frozen Royalty, said it was an exciting time.

“I think it was Tuesday, [December 8],” he said. “They told me before practice in Ontario. We practiced there, and the call-up was official on Wednesday, and I traveled on Wednesday morning.”

“I was excited,” he added. “[Ontario Reign head coach Mike Stothers] told the guys on the team that there was a possibility of a call-up because of injuries. We were in Charlotte, [North Carolina], actually. We flew back on Monday, and I got the news on Tuesday.”

“It was pretty exciting because it was my first call-up to the NHL. I’ve worked my entire life to get to that point. Obviously, there’s still a lot of work to be done, but it’s a dream come true.”

Like virtually every player making his NHL debut, Mersch, who was selected by the Kings in the fourth round (110th overall) of the 2011 NHL Entry Draft, had to overcome a case of the nerves during his first NHL game at Pittsburgh on December 11.

“The first period—I was a little jittery,” he noted. “But after that, the game kinda slowed down a bit, and I got more comfortable. You feel a little more connected. By the third period, I was feeling the flow of the game.”

Mersch was getting more ice time in previous games, but is now a bit more limited, playing on the fourth line, with Andy Andreoff and Jordan Nolan.

“It’s another level up, and the NHL is the best league in the world,” Mersch observed. “I’m going to try to find the way that my game fits into the team’s system, and [how it] fits into NHL play.”

“I want to execute a bit more, block a few more shots, make good plays that puts us into the offensive zone, strong forechecking plays, take the puck to the net, get to the front of the net—I need to do more stuff like that, which are all a part of my game,” Mersch added. “I need to be more consistent, but I think that’s going to come, in time.”

As reported in this space previously, Mersch’s biggest challenge has always been his skating—it is rather apparent that he is not the fastest, quickest skater. Nevertheless, he has not looked out of place with the Kings.

“I kinda talked about [his skating] with [head coach] Darryl [Sutter},” Mersch noted. “In the offensive zone, and in the defensive zone, below the dots, it’s fine. It’s up to par. But the neutral zone is [an issue]. You have to be quicker working back and working up ice. It comes with pace in practice, working hard in practice.”

“There’s bits and pieces [of his game] that still need work, still need sharpening up,” Mersch added. “Being 100 percent on the walls—there’s some stuff that we do up here, in our system, that’s being done in Ontario, but there’s always going to be little differences. I just have to get more comfortable with those differences up here. That’s the biggest thing for me, so far.”

“Things are starting to come along, but I’ve got a lot more to offer. I’m going to keep working hard. I’ll get more comfortable, I’ll get more confidence in myself, and go from there.”