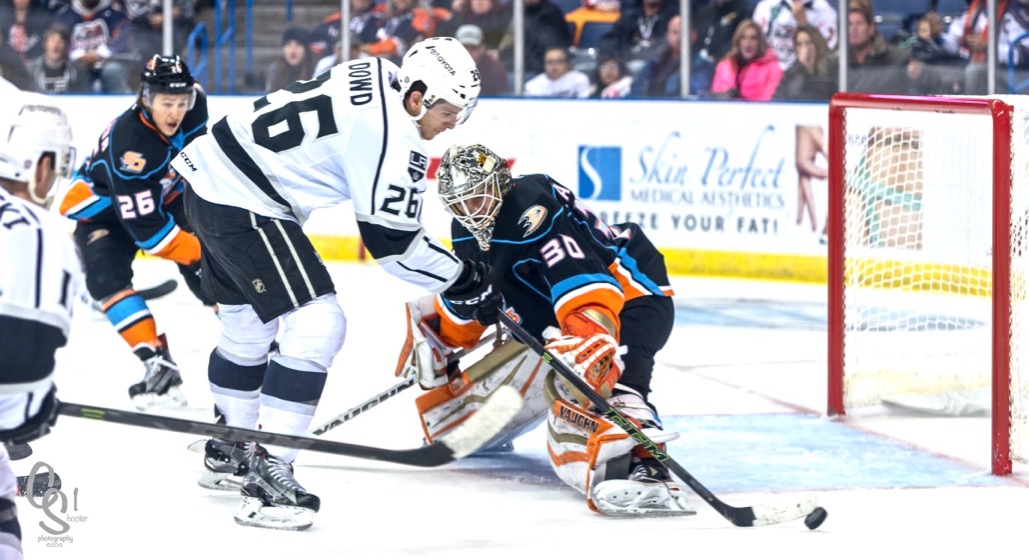 ONTARIO, CA — When the Los Angeles Kings played their first game as a member of the National Hockey League in 1967, hockey in California seemed laughable. The only snow was an hour or two away in the San Bernadino Mountains, and most locals had never seen ice hockey on national television, so would there even be a fan base to build from?

Today, Southern California plays host to two NHL teams, a pair of minor league affiliates for both franchises, and countless developmental programs for youth that have led youngsters to careers across all forms of professional hockey, not to mention one of the largest growing fan bases.

One of those minor league teams is the Ontario Reign, now the American Hockey League affiliate of the Kings.

20 players suit up for every game for the Reign, but two players usually skate with the “A” on their sweaters, the alternate captains.

For one of those players, that letter also stands for his birth state of Alabama, which isn’t exactly a hot bed for NHL talent. But that’s where Kings prospect and Reign center Nic Dowd took his first laps around the rink.

Hockey in Alabama began in 1979, when Joe Ritch took a group from the college in Huntsville and created a club hockey team. Now, Huntsville has a Division I hockey team, an unaffiliated minor league hockey club, and many youth programs developing future collegiate and professional players.

Dowd, 25, was drafted by the Kings in the seventh round (198th overall) of the 2009 NHL Entry Draft, and spent the following four seasons at St. Cloud State, where he collected 121 points (52 goals, 69 assists) in 155 games. The 6-2, 195 native of Huntsville is now in his second full campaign with the Reign (first season was with the Manchester Monarchs last year, when they were still in the AHL, before the franchise moved to Ontario to become the Reign this season), and is knocking on the door of the NHL.

Over 6,000 players have laced up skates for an NHL team, and played in the premier league for hockey, but only two have ever been from Alabama. Fellow Huntsville native, Jared Ross, played 13 games between 2009 and 2010 for the Philadelphia Flyers, and over 70 years ago, Aud Tuten skated for the Chicago Blackhawks in 39 games.

Dowd hopes to add his name to that list.

“I think it’d be a testament to the hockey down there,” said Dowd. “A lot of people don’t know, but the youth organizations down there are pretty great, and they help a lot of young kids flourish and find their passion for the game. I was just fortunate that my parents and family were always behind me. My brothers and I always had a lot of success with people pushing [us] in the right direction.”

Statistically, Dowd is on the leader boards for the Reign, with a team high 14 assists in 23 games. He’s picking up a point in every other contest, at 0.7 per game, second best among active skaters.

But exactly how close is Dowd to reaching the next level?

“I wouldn’t put a timeframe on it because a lot of it is that he has to continue to develop,” said Reign head coach Mike Stothers. “He’s gotta bring more to his game, maybe on the offensive side. Everybody is looking for players that can score or set up plays, and also some of it is the need of the organization. It’s all about opportunity and when it’s presented, and I know if and when Dowd gets that he’ll make the most of it.”

The AHL is a developmental league, where Dowd has room to improve, as Stothers mentioned. The needs for development in Dowd’s game are self-assessed, and something he has a good knowledge of before he continues to move forward towards a career at the top.

“Face-offs are a huge thing and defensive zone responsibility is huge,” he said. “I’m not gonna get an opportunity to play at the big level if I’m not responsible in my own zone. I’d like to think all the work I put in after practice in face-offs, and stuff like that, as well as good defense, is gonna lead to offense, so hopefully I can continue to work towards that.”

Offense is the key word for both Stothers and Dowd. The Reign, as a team, currently sit fifth lowest in goals scored in the 30-team league. Dowd has just two goals to his name in 23 contests and sits near the bottom on the team in shot percentage at 3.9 percent. That would create the assumption that the Reign aren’t competing, but it’s the exact opposite.

In fact, the Reign are the top defensive team in the AHL, allowing 1.87 goals-per game, more than one goal per game less than division rival San Diego. They also lead the Western Conference in winning percentage (.761), and they lead the Pacific Division by six points. A large majority of this is helped by their penalty-kill, where the Reign are second in the AHL, with an 88.8 percent rating. All the while, Dowd takes the face-off dot and covers the point man at the beginning of nearly every penalty-killing shift.

“I played last year, and killed a lot a penalties,” Dowd noted. “When you get those opportunities and you’re successful, the coaches are a little bit easier giving you a little more ice time and hopefully, I just continue to play well and continue to help out on the penalty-kill.”

Perhaps the most understated fixation to a team’s success is face-off wins. As of mid-December, as reported by Sheng Peng of Jewels from the Crown, Dowd led the team in face-off percentage with a 58.1 percent rating..

“It’s a tough job,” he noted. “We have a lot of good guys on our team in Andrew Crescenzi, Kris Newbury, and even Ryan Horvat, but I think coming into pro hockey it was a little eye opening because guys are so good at it, compared to college.”

“It’s so valuable at this level because puck possession is something that can’t be undervalued,” he added. “Your shift could be 30 seconds, and you’re chasing the puck if you lose the draw. If you win the draw you might be able to play in the offensive zone and create offense. I’d have to factor Nelson Emerson as a big part of how I take draws, how I dig in and how important every draw is. Like I said, it can make or break your whole shift.”

Along with Emerson, former Kings players such as Glen Murray, Mike Donnelly, Rob Blake and Luc Robitaille catch the Reign play on any given night. With the AHL affiliate not far from the Kings’ El Segundo, California offices, it gives them the opportunity to see their players develop and play any time they desire. These developmental coaches come twice a month to work with the players directly, and Dowd has seen immediate results from their impact.

“We’re pretty intertwined with the organization up top and they do a good job of having a presence down here with the development staff and the scouts and even the general manager and then the brass,” said Dowd. “I’d like to think they’re the best guys in the league that do that and the stuff we’re hearing from them is the stuff that happened to them over their careers, and to hear from guys that played multiple years in the NHL is something that can’t be emulated unless it’s coming from them. We’re pretty fortunate to have those guys in our corner.”

Something that doesn’t show in any box score is the ability to lead a group of guys on the ice. Dowd represents leadership on the ice as one of the Reign’s alternate captains.

“[Dowd] comes to the rink every single day, works hard and brings it every single night,” said Reign captain Vincent LoVerde. “We couldn’t ask for a better leader. He wants to win, he wants to compete, and he wants to be the best out there. That speaks volumes for him. He’s been awesome.”

“You need that as a coach and coaching staff,” said Stothers. “They’re part of our coaching staff. We know we can’t be in the room all the time, overseeing what’s going on, [so] we leave it up to them. If things become too much of a burden they come to us and I step in, but I really haven’t had to do that, and Nic is a part of that.”

Stothers, serving in his second year as the Kings AHL head coach, is seeing Dowd for a second year, and feels he’s breaking into his own as a player to be reckoned with moving forward.

“He’s stepped out of the shadow of last year’s team where you have Jordan Weal, Brian O’Neill and Nick Shore for a long point,” Stothers noted. “He was maybe a so-called third-line centerman and now he’s front and center. He’s taken it and he’s running with it, and he’s become a real strong leader for us.”

“He’s done everything well and I think it started last year in the playoffs when he stepped his game up and made a real statement with how he wanted to be an NHL player, and he did it through training camp this year,” Stothers added. “There’s a real bright future for Dowd, not just here in Ontario, but in the NHL.”

Only time will tell, in terms of Dowd reaching the highest level and suiting up for the Kings. But a few years down the road, the possibility of Nic Dowd jerseys being sold and worn around skating rinks all throughout Alabama and California is not out of the question. The tools are evident in his defense and abilities in the face-off circle. When all is said and done, the odds of Dowd lifting the Stanley Cup someday are becoming better and better, and fall on his shoulders as to the player he decides to become.