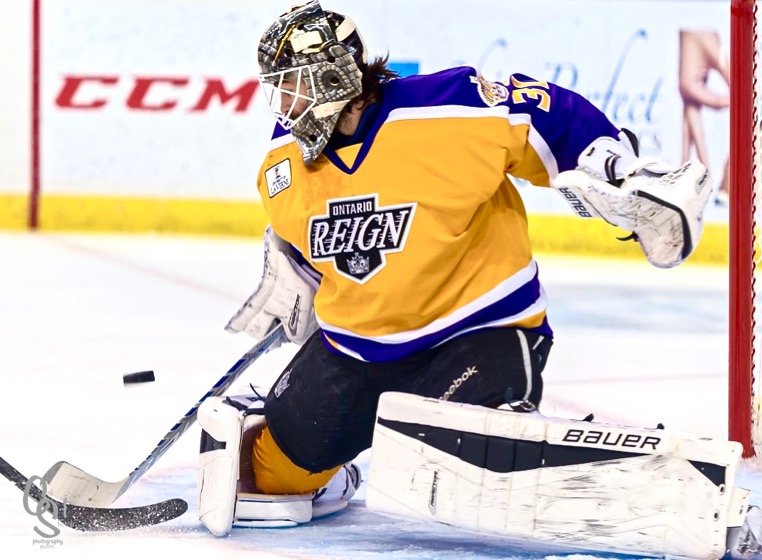 ONTARIO, CA — It wasn’t all that long ago when the Los Angeles Kings looked completely set in goal for the foreseeable future.

The Kings’ number one netminder, Jonathan Quick, now a two-time Stanley Cup Champion, has established himself as an elite goaltender, a superstar in the National Hockey League.

Behind Quick was Martin Jones, who went undrafted, but was signed by the Kings as an unrestricted free agent, and developed in their system. He played well enough to raise his trade value to the point where they could use him to acquire proven left wing Milan Lucic from the Boston Bruins last summer.

The Bruins quickly shipped Jones to the San Jose Sharks, where he is their number one goaltender.

But the Kings would have made that deal only if they felt they had enough depth in goal in their system, and even though they signed Jhonas Enroth to be their number two goaltender, they had Jean-Francois Berube and Patrik Bartosak, both Kings draft picks, waiting in the wings.

But with Berube having been claimed off of waivers by the New York Islanders, and with Bartosak facing domestic violence charges in New Hampshire—he’s been suspended indefinitely by the Kings and whatever potential NHL career he had in front of him is likely all but gone—suddenly, the Kings have a huge hole in their system.

Fast forward to a few days before Christmas, the Kings still have virtually no depth in goal in their system, with just one drafted netminder, Alec Dillon, who they selected in the fifth round (150th overall) of the 2014 NHL Draft, in their system. But with a bit of luck, and lots of hard work, the Kings have found a player, now their number three goaltender, who just might be able to step in as their backup goaltender, should the need arise.

Indeed, Peter Budaj, who broke into the NHL with the Colorado Avalanche before moving onto the Montreal Canadiens and last season, was in the Winnipeg Jets system, was a training camp invitee, and played well enough to earn an NHL contract with the Kings.

As well as Budaj played in training camp, he has excelled with the Ontario Reign of the American Hockey League this season. In fact, Budaj has been atop the AHL’s goaltender rankings for weeks, currently with a 15-3-2 record, a 1.49 goals-against average (GAA), a .938 save percentage and four shutouts—all stellar numbers.

“He’s been rock solid for us,” said Reign head coach Mike Stothers. “You know what? He just has a calming influence from the net out. Even when it looks like there’s chaos in our zone, he has a unique way of staying cool and calm under pressure, and making big saves when we need them.”

“I like the way he comes out and handles the puck for our defense,” added Stothers. “He makes sure it’s away from the yellow kick plate so that they can handle it cleanly. He’s [also] smart. He knows when to cover [the puck] when we need a whistle, or when someone’s been out for an extended shift. That’s just experience.”

While Budaj’s play might not seem all that surprising for a goaltender with NHL experience who’s playing in the AHL, what is very surprising is that Budaj is where he is today after the season he had last year.

After six seasons with the Avalanche, Budaj played three seasons with the Canadiens, before he was traded to the Jets on October 5, 2014, along with Patrick Holland, in exchange for left wing Eric Tangradi.

After joining the Jets, Budaj was assigned to their AHL affiliate, the St. John’s Ice Caps (now the Canadiens’ AHL affiliate), where his career took a steep nose dive.

“He had a rough season last year,” said Dusty Imoo, who worked in the Jets organization before joining the Kings this season to handle their goaltender development. “It was a pivotal time in his career. He had those moments where he questioned himself, ‘am I on the downswing?’”

Budaj indicated that after being sent to St. John’s, he was focused on all the wrong things.

“It was tough,” he said. “I got ahead of myself, mentally. I was always trying to look at what the other guys were doing, and not looking at what I was doing, at what my task was. I didn’t win last year, which was frustrating, because I tried to work hard.”

“Last year, it was a shock to me to get sent down to the minors,” he noted. “The year before, [the Canadiens] went to the Conference Finals, and I had a pretty good year. But things change, and I don’t think I was ready for it. I put too much pressure on myself to get back [to the NHL] as soon as I could, which never really helps, because you put more pressure on yourself. You want to be back, but when you put the [skates] on, you’ve got to focus on the next shot, and that’s what I didn’t do. I was focusing on everything else.”

“It was extremely difficult, because even with all the work I did after practice, I didn’t get the results,” he added. “It was frustrating, at the time. It was hard, but my parents taught me to never quit, no matter what you do, no matter what’s going on, no matter what mountain you have to climb. You just have to keep going.”

Budaj did just that this past summer, even though he had played himself out of a professional contract.

“I was really glad that I was able to find peace of mind [last summer] and come into [the Kings training] camp without a contract,” he said. “I worked hard over the summer to prepare myself as best I could, physically. Once I got there, I just tried to play and enjoy the moment, no matter what happened. Just play the game and have fun. God blessed me with being able to play and earn a contract.”

Imoo believes that not having a contract after last season was a blessing in disguise for Budaj.

“I remember leaving Peter last year, going home for the summer, and he was resetting—starting fresh,” said Imoo. “Not having a contract—being back to where he was back in the day—was like when he was just starting out. He had all this experience, but he couldn’t [think], I should be here, or I should be that. He just had to find an open slot, and I think that approach helped him, heading into Los Angeles. I think that having to earn a contract with the Kings brought the best out of him.”

“It was definitely motivation,” added Imoo. “Not having a contract was like starting out, as a young player, all over again, having to make an impression on the coaches and scouts. Sometimes that brings out the best in a player, and that was certainly the case with Peter.”

Even though, like any goaltender, Budaj would prefer to be in the NHL, given all he’s been through since last season, being with the Reign, in the AHL, is a fresh start, a second chance, so to speak, and he is relishing the opportunity.

“I have to stay focused on every game, every shot,” added Budaj. “Don’t get ahead of yourself because when that happens, your focus is going to be directed away from where it’s supposed to be. [A goalie] is supposed to be focused on the next shot. That’s it.”

“That was the big adjustment I had to make over the summer. My mental game is in a better state now. This year, I’m trying to keep my mind on the game, and on the moment I’m in. Now I take every day as a blessing to be here.”

A big part of Budaj’s turnaround has been his ability to take the positives out of his experiences from last season.

“Last year was a bad experience, but it helped me move forward because there’s really no bad experience,” he observed. “There’s only experience, [and] I’ve been around, I’ve been through a lot. I’ve been playing professional hockey for 13 or 14 years now. You accumulate a lot of experience. You learn to handle the obstacles that are in front of you. That’s helped me a lot with my mental game. My family helps me a lot, too.”

Imoo has been very impressed by Budaj’s turnaround, but not surprised.

“Obviously, he’d like to be back in the NHL, but he’s happy to be in Ontario, in the AHL,” said Imoo. “It’s put him back on the map, and good things will happen for him. Who knows what [they might be], but if he keeps playing like this, opportunities will arise.”