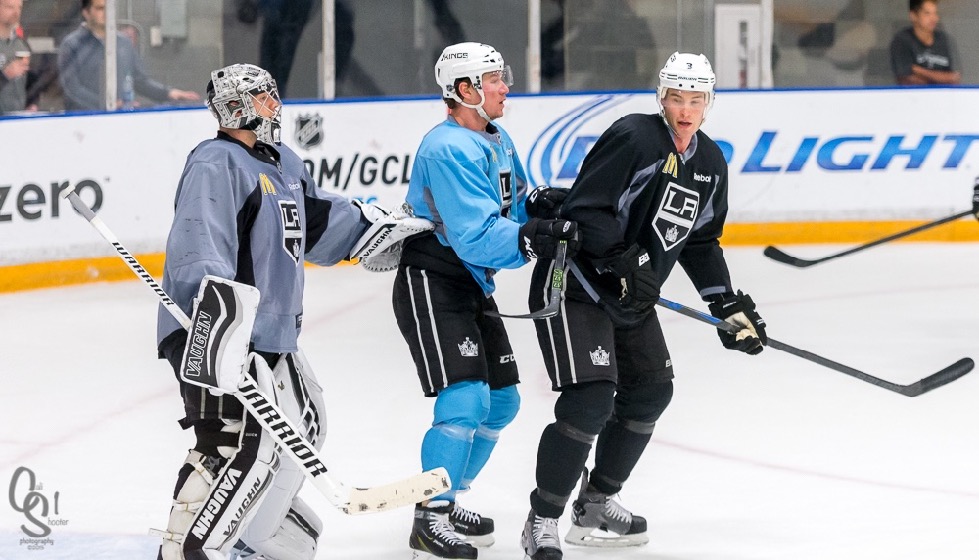 EL SEGUNDO, CA — Brayden McNabb began the 2015-16 National Hockey League season in street clothes, rather than on the bench with his teammates, in the Los Angeles Kings’ first game of the season on October 7 against the San Jose Sharks.

The reason? A sub-par training camp, one in which Kings coaches were rather critical of his performance.

“I think, in training camp, I got caught trying to perfect things,” said the 24-year-old native of Davidson, Saskatchewan. “I just wasn’t playing my game. It was kind of a wake-up call, not playing in the first game. It’s not fun. You always want to play. It’s frustrating, but at the same time, you want to be a good teammate. You hope the team wins, and that everything goes well. But you want to do everything you can to get yourself back in the lineup.”

“I don’t think my identity was there—who I am, as a player,” added the 6-4, 208-pound defenseman. “I got away from that a little bit. But they talked to me a lot, and I finally found it. I’ve just got to continue to do it.”

Indeed. McNabb has played in all four games since, and has earned praise from head coach Darryl Sutter.

“He’s played really well,” Sutter noted. “He’s got to have an identity, he has to have a presence on the ice, in terms of his ability to move the puck, and not his ability to defend, but to check and compete. He’s done that better than at any time during training camp.”

But McNabb can’t bask in the bright lights, even if the spotlight is shining down on him because of positive comments from a head coach who is usually extremely reticent to offer any kind of praise for a young player (more on that in a bit).

“You’ve got to earn [the coaches’] trust,” said McNabb. “It goes with consistency, and playing to your identity, so I’ve got to continue to do that. It’s early in the season, and being consistent is what I’ve got to concentrate on.”

Both player and coach talked about identity, and for McNabb, that is…?

“Just being a firm, hard player to play against,” he explained. “Being physical—I’m a bigger guy. I’m going to make some hits. Doing that, playing strong in my own end, down low—the offense will come if I take care of my own end.”

Going back to Sutter’s praise of McNabb…if his candor about a young player seems odd or unusual, you have every right to be scratching your head, so to speak. But when you consider that four of the Kings top six defensemen can still be considered to be young players, it is no surprise that Sutter was more forthcoming than one might expect, in this particular case.

“There’s four young guys playing heavy minutes for us, and we need Drew [Doughty], [Jake Muzzin], [Alec Martinez] and Brayden—they have to be really, really effective guys,” Sutter emphasized. “We can’t continue to say that they’re maturing, or that it was a youthful mistake. You have to see it as, shift in, shift out, that they’re consistent in what they’re doing. That doesn’t mean that they’re mistake-free, and that doesn’t mean that a mistake defines their game. You’re trying to limit them, and make sure that they’re really good competitors.”

Sutter has liked McNabb’s play enough to put him on the team’s top defensive pairing with Doughty, and accordingly, McNabb’s ice time is on the rise. In fact, his time on ice against the Colorado Avalanche on October 18 was 24:01, second only to Doughty’s 27:53.

“Playing with Drew is great,” said McNabb. “Everyone knows how good he is, so it’s making sure I read off him the right way.”

“I absolutely love playing with Nabber right now,” Doughty said on October 15. “I think he’s a hell of a player, and he’s getting better and better every game. I also think I can help him a lot.”

McNabb indicated that playing with Doughty often means watching Doughty do his thing and making sure that he is covering for him.

“We read off each other pretty well,” McNabb noted. “Everyone knows that when he has the puck, it’s going to be a great play, so it’s just reading off him and counter-balancing that.”

“We work pretty well together,” McNabb added. “We’ve got different skill sets, and I think they [compliment] each other really well, so it’s just continue being simple, being confident, going out and just focusing on helping our team win.”

@LAKings and the #2021NHLDraft-Day 2: Exclusove Interview with Dir. of Amateur Scouting Mark Yannetti.
#LAJings trade alert
Frozen Royalty Audio/Video: Exclusive Interview with @LAKings Director of Amateur Scouting Mark Yannetti on 2021 First Round Draft PIck Brandt Clarke...
The #LAKings have made the following players available to Seattle for the 2021 Expension Draft:
#LAKings protected list for 2021 Expansion Draft...
Not hockey-related, but this is vitally important...
Long-time #LosAngeles radio sports reporter/broadcaster Ted Sobel has written a book, not just about athletes and sports personalities who he has met/covered, but the book is a collection of stories about his experiences with celebrities in music, movies, a little in politics, not to mention a bit about his experiences growing up and living in the Los Angeles area.
The final installment of Frozen Royalty’s series on former LA Kings great Dave Taylor looks at the question:
Congrats to the @tblightning on winning the 2021 #StanleyCupChampionship! #StanleyCupFinal #NHL #TBLightning