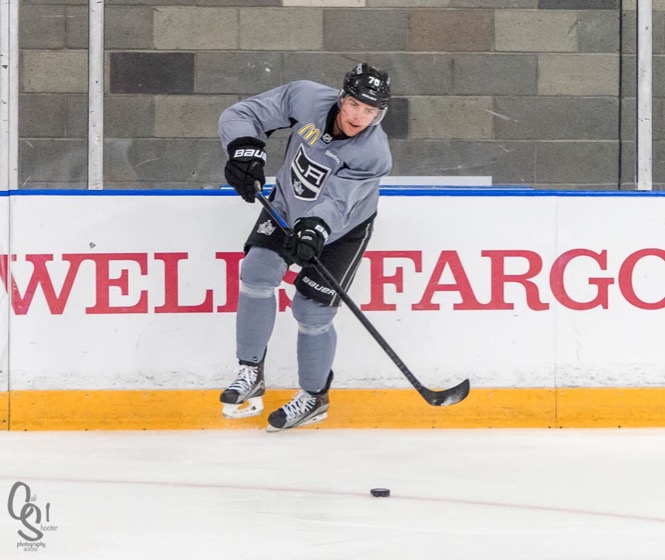 EL SEGUNDO, CA — January 10, 2015 marked the start of the second half of the 2014-15 National Hockey League season for the Los Angeles Kings, proved to be a huge, dark cloud that would hang over the remainder of their season with the loss of then-rookie left wing Tanner Pearson.

That night, the Kings skated against the Winnipeg Jets, suffering a 5-4 shootout loss, but more significantly, Pearson slammed into the end boards, feet first, breaking his left leg.

To that point in the season, Pearson was still in the conversation for the Calder Memorial Trophy as the NHL’s Rookie of the Year, having scored twelve goals and adding 14 assists, with 14 penalty minutes and a +14 plus/minus rating in 42 games.

Head coach Darryl Sutter indicated that Pearson was on the verge of returning to the lineup when the Kings’ 2014-15 season ended rather unceremoniously last April, as they missed the playoffs.

“He wanted to play last Spring,” said Sutter. “We just didn’t play long enough for him to play. Other than being medically cleared. He was ready to play, but he wasn’t allowed to.”

“It was still kind of up in the air once the season was over,” Pearson told the media on September 19. “But if I had to go, I would’ve gone for sure, there’s no question about it. I wanted to get back playing as soon as possible. There were obviously some situations that held me back from playing, but right now I’m a hundred percent and ready to go.”

As Pearson alluded to, his recovery did not go without a hitch or two.

“If it would’ve went smoothly, I would’ve been playing by the end of the year,” Pearson told Frozen Royalty. “A couple of things happened, but it’s all good now.”

Like any injured player, Pearson’s recovery was challenging, and as he noted, it was frustrating for him to know that he was unable to help his teammates on the ice. It was also difficult to remain positive. But he knew he had to maintain a positive outlook, both for himself and for his teammates.

“That’s not the way to look at it—being negative,” Pearson stressed. “You can’t be negative around the guys. It rubs off. You want to come in here and be as positive as possible. Every day was one step closer to being 100 percent. That’s the way you’ve got to look at it.”

“You want to be out on the ice, helping the team try to win,” Pearson admitted. “It’s tough sitting out that long, just watching games over and over, thinking about how you could help. But stuff happens in this game. It’s a physical game and anything can happen. It was an unfortunate thing to happen, but it’s in the past. Hopefully, I can play a full season this year.”

With three pre-season games under his belt, Pearson indicated that his training camp is going well, so far.

“Things are going pretty good, I think, kind of getting back into the groove of things,” he said. “It’ll be different after playing a couple of games in a row. But so far, it’s been a pretty mellow training camp.”

Pearson said that once he was fully cleared, his off-season conditioning work went as it normally would. He also indicated that he is feeling no ill effects from his injury.

“Once I started going full-go again, it was pretty normal for me,” he said. “Once I was cleared 100 percent, it was just skate, workout, and just kind of a normal summer after that.”

“It feels pretty good right now,” he added. “With any broken bone, you’re going to feel aches and what not for quite some time after it’s fully healed. But it’s not a big deal. You’ve just got to keep on top of it.”

Going into the new season after suffering a severe injury, and after being out of the lineup for an extended period immediately following a year in which he won the Stanley Cup—2014-15 was certainly a rookie season gone awry, Under the circumstances, one might expect Pearson to feel some added pressure to excel this season. But that’s not how he’s looking at things.

“It’s the same thing,” he emphasized. “I don’t think that just because you were hurt for half the season last year means that you want to try to put [extra] pressure on yourself to do better. I think it was going pretty good last year. I want to try to get on the same start this year, too.”

Pearson is expected to start the season on a line with Tyler Toffoli and Jeff Carter, reuniting the “That 70’s Line” that was so successful in the 2014-15 run to the Stanley Cup Championship, and that continued to have off-and-on success last season, until Pearson went down.

Pearson said that the line is looking for consistency and early chemistry this season.

“I think we started off on fire last year, and it kind of dwindled down after we had that home stand,” he noted. “I think we want to keep it going the full year, hopefully, playing out here again, getting the consistency back and being a part of each other again will be good and help the chemistry out.”

“The thing that helps the most is how fast you can build chemistry,” he added. “It doesn’t matter what line you’re on.”

Stick tap to LA Kings Insider Jon Rosen for his contributions to this story.