EL SEGUNDO, CA — We’re still almost two months away from the start of the 2015-16 National Hockey League season. But for fans of the Los Angeles Kings, their team has not been on the ice since April 11, more than three months ago, a layoff many are no longer accustomed to after seeing their team play until mid-June when they won the 2012 and 2014 Stanley Cup Championships.

But on August 16, one could hear the vaguely familiar sounds of hockey pucks banging off the boards and clanking off goal posts. One could also hear the sounds of skates cutting into the ice as players tried to stop, of stick blades striking pucks on a slap shot, and of fans cheering loudly when a goal was scored.

Indeed, a charity hockey game benefitting Be The Match, sponsored by the 2,300-plus member Knights of the Forum group on Facebook, was played at the Toyota Sports Center in El Segundo, California on August 16, in front of a sell-out crowd of over 400 fans.

“This was absolutely amazing,” said Chris Brito, one of the primary organizers of the game—he came up with the idea for it. “This was something I won’t forget for a long time. Everyone played their hearts out.”

“It was more than I ever thought it would be,” added Brito. “This is about the best it could get. It’s amazing. I couldn’t be happier.”

The game ended with a 6-5 score. Players scored goals and goaltenders made saves (and failed to make some, obviously). One team won and the other lost.

Who those people were, in terms of giving them credit, or which team won and which team lost, are unimportant. The biggest story is what happened off the ice—what the game was played for, which will be covered in a separate story.

But there was another big story regarding what happened on the ice, and that was teamwork, something that may have never been more apparent in a Southern California hockey game.

To be sure, in a co-ed game with rosters filled with players who had been playing for years and years, those who just started playing within the last year, and everything in between, the result could have easily been a disaster on the ice, especially with some having never played in an organized hockey game before.

Despite that, they skated right out onto the ice and quickly overcame their jitters, anxiety, and fear of embarrassment.

“I had a blast,” said Natalie Uyeno Firestone. “The best part was skating in front of that big crowd and having them cheer for us, especially the middle section with all the Gold team signs. It was really cool.”

“I started playing hockey about five months ago,” said the 46-year-old resident of Torrance, California. “I was nervous, but it was for a good cause, and I had a lot of support. I just wanted to go out there and have fun.”

Another player who played in her first-ever game drove all the way up from San Diego, California.

“There were a lot of people there, but it was a blast,” said Christina Murphy, 33. “It’s for a purposeful cause, and I’m flooded with emotions. I’m so proud to have been a part of it.”

Murphy indicated that she too was rather nervous going into the game.

“It was scary,” she said. “I couldn’t sleep all night. I did everything I could to try to sleep. I had a beer, tried to read a book. I had so many jitters—I’ve only been playing hockey for about four-and-a-half months now, and this was my first real game.”

“I had a nice, light breakfast,” she added. “I had a beer and a salad before I played the game, and I did well, I think. That’s what I did to calm my nerves, but I also pumped myself up. I reminded myself that we were doing it for Tanner Raboin. I’m so glad that this was my first experience playing in a real hockey game.”

(For more on Tanner Raboin and his story, check out Charity Hockey Game Expected To Raise More Than $10,000 For National Bone Marrow Matching Program)

Rookies like Firestone and Murphy worked hard to improve their games. But they also indicated that they were able to overcome the fear of making a spectacle of themselves because of the help, support and encouragement they got from their more experienced teammates.

“I’ve been training really hard,” said Murphy. “I’ve been driving up here from San Diego every weekend, just to do stick time, play in pick-up games, and here I am! And our team won!”

“Guys from the South Bay, like Daniel Ollado and Frank Galati, they’ve been with me at stick time in Harbor City,” Firestone noted. “Ron Robinson, too. We’re beginners, but they’ve been doing a good job with us—being patient and training us. All the hard work seemed to pay off today.”

Bret Nelson said that he did what he could to help those who had little experience.

“Whenever I could, I encouraged people who’ve skated for less than a year, or a couple of years or four months,” said the 51-year-old of Culver City, California. “Everyone has to start somewhere. It’s great to see them playing and improving.”

Brian Sharkey indicated that this level of teamwork was fairly easy to achieve with such a great cause to support as motivation.

“It was great because everyone had one goal in mind—the cause,” said the 41-year-old from Irvine, California. “Everyone has different backgrounds, different experiences. But we’re all interested in hockey.”

Mike Gonzalez, founder of the Knights of the Forum and a main organizer of the charity game, was not on the ice, but he too noted the teamwork, leadership and selflessness exhibited by the players.

“A lot of the experienced players came forward to help and teach others so they can step up their game a bit, and make it more entertaining,” said Gonzalez. “Two players, in particular, Galati and Amber Lynette Hall, took those reins very well. They took that responsibility very seriously, as far as what they accomplished with their teams.”

Hall indicated that she had mentors to help her learn the game, and she feels that she has a responsibility to help others and pass down what she has learned.

“It’s a lot of fun,” said Hall, 22. “There’s a lot of women coming out to play, and as the sport grows in Southern California, you don’t see many women’s hockey teams. So to have women who are just getting their feet wet in the game, to see how passionate they are about the sport, even though they are just learning how to skate, and how to play, I see that, and I want to build off that. I want them to grow, and be the player I am now.”

“I was once them, added Hall, a resident of Lakewood, California.” “People gave me the opportunity [to get better]. They took me in and said, ‘you have the willpower, you have the heart. If you want to play, you can play.’”

“It doesn’t matter if you’re disabled, if you’re slow, if you’re fast, if you’ve been skating for years, or just a month. I see people, and I want to grow with them. Being on the ice is a whole other experience and I want to share that with everyone else.”

Hall indicated that the cause they were playing for might have been all that was needed to push the beginners past whatever fears and anxieties they may have had.

“To see them—they’re just starting out, but they see this event, and they’re all saying, ‘we want to do this for Tanner.’ They want to do it for his family, and for Be The Match,” she observed. “We have a lot of beginners, but they just want to come out and do something good for the cause.” 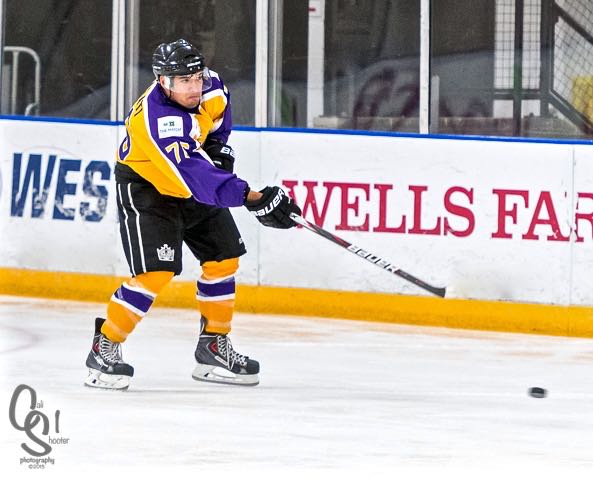 “I grew up admiring NHL players, and I’m a native Californian, so one of my biggest influences was [former Kings left wing and current radio color commentator] Daryl Evans,” said the 26-year-old resident of Harbor City, California. “Naturally, when you’re at a younger age, and you’re learning how to skate, when you have a mentor like that—it’s almost like a pass it down thing for me.”

“When I see people having problems skating or playing [the game]—outside of hockey, too—I like helping people. It’s one of those rewarding things,” added Galati. “When you have the skills and see someone else who doesn’t, when they take your advice and they progress, you [get a sense of fulfillment]. It’s a big accomplishment to see them make progress.”

“I remember being at that level. You wanted someone to help you out. You wanted to look good. No one wants to go out there and be embarrassed. I always tell people, ‘if you have any questions, don’t be afraid to ask us,’ and they could’ve asked any of the experienced players for help—skating, shooting, anything.”

That big influence Galati mentioned, Daryl Evans, played in the game, as did fellow Kings alumnus Bernie Nicholls. Kings television play-by-play commentator and former right wing Jim Fox was one of the coaches for the Golden Knights team.

As he came off the ice after the final buzzer sounded, Evans was beaming with pride.

“It means a lot [to see interest and the commitment to each other on the ice],” he said. “It speaks volumes for the craving for hockey out here. When you look at the crowd, these are people who are watching the Kings play all year and over the years. Some of them have taken up the game themselves, and some of them, probably not until they started watching the Kings. Then, they get a chance to come out here [on the ice].”

“It was great,” he added. “Making passes and seeing the smiles on their faces, all the close calls, it really is good. Hockey at any level is so much fun.”

“This was just a little way to have some fun, but it was mostly to raise funds and bring the awareness out. It’s hockey, but it’s also for a great cause, so it’s great to see that we have so many people involved.”

As noted earlier, on this day, sure, the score was 6-5. For the record, the Forum Blue Knights came back from a 3-2 deficit to defeat the Golden Knights. But the score wasn’t important. It was fun and exciting for the players who scored goals, contributed assists, or made big saves (there were several of those). But none of that mattered at all. Indeed, on this day, there were no losers…only winners, with the biggest winner being Be The Match and ultimately, patients who are in desperate need of a bone marrow match.

That story, the real story, will be examined on August 18. Stay tuned.

Photos from the game by David Sheehan of CaliShooterOne Photography are available for viewing on Flickr at KOTF Inter Squad Charity Game and at KOTF Part 2.