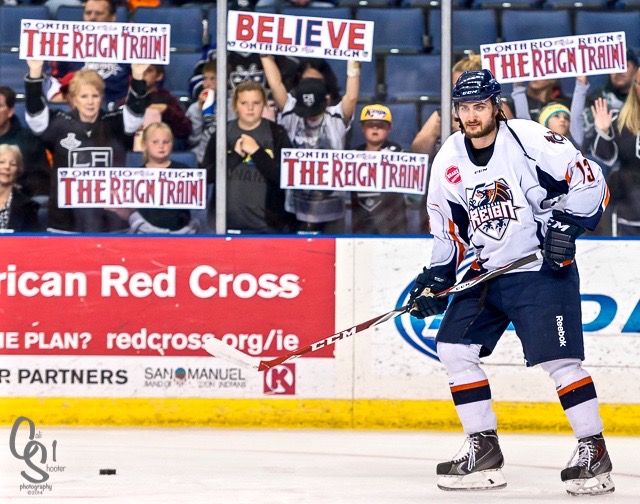 ONTARIO, CA — On a night when their opposition, the Allen Americans, were on the brink of elimination from the ECHL’s 2015 Western Conference Finals, and knowing that their team was just one win away from reaching the 2015 Kelly Cup Final for the first time in franchise history, the Ontario Reign looked anything but regal.

Instead, the Reign were soundly beaten in Game 5 on Sunday night, 6-2, in front of 4,371 fans at Citizens Business Bank Arena in Ontario, California.

The Reign took control of the game in the first period, generating pressure in the attacking zone, shift after shift.

Center Judd Blackwater scored on the power play at 14:08, giving the Reign a 1-0 lead after the first period.

But the tables turned right from the opening face-off in the second period, as the Americans dominated play the rest of the way, winning the vast majority of physical battles and foot races for loose pucks, and sustaining pressure in the attacking zone.

Meanwhile, the Reign were spending the majority of their time chasing the play.

Justin Baker tied the game at 6:26 of the second period, beating Reign defenseman Alex Roach, a Los Angeles Kings prospect, one-on-one, getting off a wrist shot from the right circle that beat Reign goaltender Joe Cannata, short side.

On the play, Roach appeared to hesitate when the opportunity came to take the body on Baker, and that gave Baker just enough time to make a move to create some space, and he capitalized.

Somehow, the Reign managed to retain their one-goal lead after two periods as they cashed in their lone quality scoring chance of the second period on a goal by forward Rocco Carzo at 14:30.

But after that, it was all Americans, who continued to dominate, in terms of puck possession and attacking zone time, not to mention scoring five unanswered goals, one into an empty net.

After the game, Reign players indicated that their play was the deciding factor in the game.

“We took our foot off the pedal, obviously,” said Carzo. “We had’em on their heels when we went up, 2-1. But a few mental mistakes changed the whole game for us.”

“We took some dumb penalties, and we gave them a few goals. That’s how they’re going to beat us. Turnovers, we gave them space to make plays, and you can see that they can make the tic-tac-toe plays.”

“We can’t lose one-on-one battles,” he emphasized. “We have to be stronger on the walls, eliminate our turnovers, and pay attention to the little details of the game. But we didn’t do that, and they punished us.”

Reign head coach Jason Christie indicated that even in the first period, he saw things already beginning to unravel.

“We didn’t even establish a forecheck,” he observed. “Our guys were swinging away. They didn’t go through bodies. There was too much time and space out there.”

“We gave up a couple of quality chances that you just can’t do against that team, and they showed us why,” he added.

With the series shifting back to Allen for Games 6 and 7, as Christie noted, the Reign must face the uphill battle of advancing to the next round by winning on the road.

“We’ve got to make sure that we get back in the saddle and be ready to go on Tuesday,” said Christie. “They play well at their home rink, so we’ve got to be sure that we’re ready. It’s going to take more determination and [a higher] compete [level].”

“We can’t play their game,” Carzo stressed. “We have to stick with the game plan that helped us win three games in a row. We made some mistakes that we shouldn’t be making, and they took advantage. When we play them hard, when we play them tough, when we get in their faces, they can’t score. But tonight, we gave’em all those goals.”

Taking things one game at a time and not being too concerned about a bad game are critical.

“We’re going back to Allen the same way as we would here,” said Carzo. “We’re going to put this in the back of our heads now. It’s over with. We’ll start on our game plan for the next game, take things one game at a time, and move forward.”

“It’s a new day tomorrow. That’s why it’s a seven-game series. That last one is the hardest one to win, so you’ve got to make sure you’re ready to go.”