CULVER CITY, CA — Nearly six months after it closed its doors for the last time in its most recent incarnation on February 2, the Culver City Ice Arena is still in limbo.

Today, the only signs of life at the rink, if you can call it that, are automobiles parked in its lot, which was rented to a nearby auto dealer for storage of its inventory.

Indeed, the building is dark, the ice melted away months ago. Despite that, the rink is still “breathing,” as owner Michael Karagozian cannot do anything with the building, other than operate an ice rink, due to zoning restrictions on the property.

The latest development is that on July 28, the City Council of the City of Culver City will consider declaring the property a City Cultural Resource, which, depending on the classification, could prevent the property owner from demolishing, removing or altering the exterior appearance of the building, “…in whole or in part, without first obtaining a Certificate of Appropriateness or a Certificate of Exemption.”

Architectural Resources Group, Inc. (ARG) studied the nomination of the Culver City Ice Arena and found a “…preponderance of evidence that the Ice Arena is eligible for listing in the California Register [of Historical Resources] under Criterion 1 (association with events that have made a significant contribution to the broad patterns of California’s history and cultural heritage).”

Specifically, ARG concluded that the Culver City Ice Arena qualifies as a City Cultural Resource because of:

The City Council could also find that the rink does not meet the criteria for the “Significant” classification, in which case they could declare it as a “Recognized” cultural resource, which would offer no protections whatsoever, or they could refuse to declare it as a City Cultural Resource altogether.

The highest classification, “Landmark,” does not appear to be under consideration at this time.

Should the City Council adopt the Cultural Affairs Commission’s recommendation, rink supporters would have more leverage towards development of the property into a state-of-the-art rink.

But is the Culver City Ice Rink worthy of that historic/cultural designation?

One look at the nondescript structure is not likely to convince anyone that it is, although the landmark “Ice Skating” sign (pictured above) and the figurine of the figure skater that sits over the main entrance stand out—they are rather unique and have been fixtures there for many years.

Nevertheless, the story of the Culver City Ice Arena, and of its historic and cultural significance, is not rooted in its architectural history. Rather, it is about the people, including many famous, or otherwise significant, athletes, who skated there.

To be sure, there were prominent figure skaters, including some who went on to become medal-winning Olympians, including Dorothy Hamill and the pair of Tai Babilonia and Randy Gardner.

But as a journalist who has covered the Los Angeles Kings and the National Hockey League for many years, and grew up as a Kings fan with them practicing at the Culver City Ice Arena from childhood to my adult years, I know a lot more about the hockey-related history of the Culver rink.

Indeed, hundreds of NHL players practiced at that rink during the more than twenty years the Kings called it their practice home before they moved in 1994 to what was then Iceoplex in the San Fernando Valley.

The most notable Kings players to skate at the Culver rink were (listed alphabetically):

But it was not just the Kings who practiced at the Culver rink. In fact, visiting NHL teams also practiced there when they were in town—hundreds of NHL players skated on that ice multiple times for more than twenty years.

Although the list below is rather long, and even though there is no way of confirming that a particular player actually practiced with their team on a given day, the following players played for teams that practiced many times at the Culver rink, a list that really only scratches the surface of former NHL stars who would have skated there over the years (listed alphabetically): 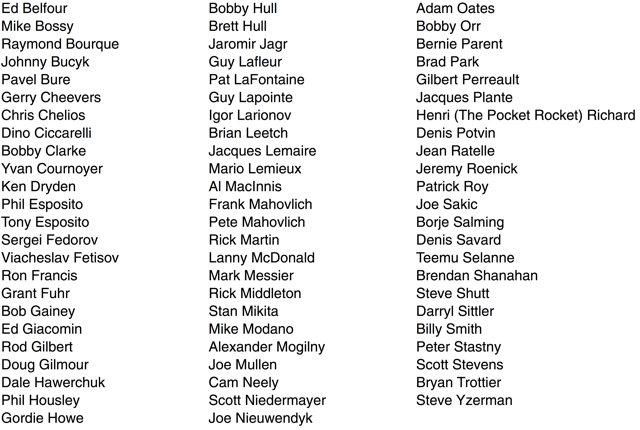 Of the players listed above (including former Kings players, listed earlier), 71 are (or will be) honored members of the Hockey Hall of Fame (three will be inducted in November 2014). They have also won 87 Stanley Cup Championships combined—many of them multiple times each—and 13 Olympic medals, six of them gold.

Again, there is no way of confirming that a particular player practiced with their team at the Culver rink in years past. However, given the number of opportunities each player had, it is safe to assume that each of them skated there, and the vast majority would have done so multiple times.

That each of these legends practiced at the Culver City Ice Arena is significant to the history of hockey and as the list indicates, the Culver rink has had quite the impact on the hockey world in the United States, in Canada, and internationally.

Closer to home, on top of the contributions the Culver rink has made to hockey at its highest levels, it was also a major contributor to growing the game among youth and adults from its earliest days to the early 2000’s in the Los Angeles area.

Considering the overwhelming significance and depth of the contributions that the Culver City Ice Arena has made to the game of hockey alone, to the NHL, to international play, and to growing the game locally, the City Council of the City of Culver City must declare it as a City Cultural Resource at the “Significant” level. Any other action would be unjust and would ignore, or worse, diminish, the site’s deep history and contributions to the local and broader communities.

Frozen Royalty by Gann Matsuda is licensed under a Creative Commons Attribution-NonCommercial-NoDerivs 3.0 Unported License. You may copy, distribute and/or transmit any story or audio content published on this site under the terms of this license, but only if proper attribution is indicated. The full name of the author and a link back to the original article on this site are required. Photographs, graphic images, and other content not specified are subject to additional restrictions. Additional information is available at: Frozen Royalty – Licensing and Copyright Information. Frozen Royalty’s Comment Policies

@LAKings and the #2021NHLDraft-Day 2: Exclusove Interview with Dir. of Amateur Scouting Mark Yannetti.
#LAJings trade alert
Frozen Royalty Audio/Video: Exclusive Interview with @LAKings Director of Amateur Scouting Mark Yannetti on 2021 First Round Draft PIck Brandt Clarke...
The #LAKings have made the following players available to Seattle for the 2021 Expension Draft:
#LAKings protected list for 2021 Expansion Draft...
Not hockey-related, but this is vitally important...
Long-time #LosAngeles radio sports reporter/broadcaster Ted Sobel has written a book, not just about athletes and sports personalities who he has met/covered, but the book is a collection of stories about his experiences with celebrities in music, movies, a little in politics, not to mention a bit about his experiences growing up and living in the Los Angeles area.
The final installment of Frozen Royalty’s series on former LA Kings great Dave Taylor looks at the question:
Congrats to the @tblightning on winning the 2021 #StanleyCupChampionship! #StanleyCupFinal #NHL #TBLightning