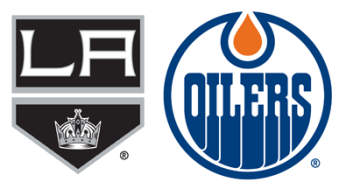 LOS ANGELES — Jeff Carter scored a goal and added an assist, and Jonathan Quick made 23 saves to lead the Los Angeles Kings to a 4-1 victory over the sluggish Edmonton Oilers in front of a sell-out crowd of 18,118 fans at Staples Center in Los Angeles during a matinee affair on April 6.

Mike Richards opened the scoring just 1:38 into the first period when he took a pass from Carter after a solid forechecking shift. Wide open in the slot, Richards fired a one-timer that beat Oilers goaltender Devyn Dubnyk just inside the left goal post.

At the 15:35 mark, the Kings were on the power play when winger Dustin Brown got the puck in the right corner. He threw the puck in front, and it hit Carter’s leg, deflecting into the net.

The Oilers put in their best shifts of the game early in the second period and their hard work paid off at the 2:18 mark when forward Magnus Paajarvi picked up the loose change behind Quick, who was down after making the first save on a scramble for a loose puck in front. Paajarvi reached behind Quick and slide the puck into the net.

But that goal seemed push the Oilers’ gas tank to empty, and the Kings took over the rest of the way, with defensemen Slava Voynov and Drew Doughty closing out the scoring.

Dubnyk was, by far, the best player for the Oilers, making 35 saves in a losing effort.

Quick earned his 13th win of the season.

Edmonton Head Coach Ralph Krueger
“They play hard at both ends. I think in front of both nets they are the best in the league, that’s why they are the defending Stanley Cup Champs.”

“I think it’s really a measuring stick that we’re trying to compete even harder against teams like this. There were phases where we had a semblance of the game going that we wanted to see, but we couldn’t sustain it. They sustained what they do great through 60 minutes.”

Edmonton Forward Sam Gagner
“Discipline is a huge factor. L.A. is a good team. They are a hard team to beat when you are undisciplined and taking penalties.”

(On tough start, Kings’ quick goal): “It’s a matter of being harder in our [defensive] zone. If we can do that, they don’t get those chances. For the most part, we picked it up there, and we were good in position. It’s just a matter of finding that extra intensity in these tight games.”

(On a lot of penalties and difficulty of getting a flow going): “It’s tough. You have to find ways to get through it. I think there were penalties both ways. Sometimes that’s just the way the game goes. You have to find a way to continue to work through that and get your game going regardless if it’s slow or not.”

Edmonton: Goaltender Devan Dubnyk
“They are a big team and play hard. They start to play well at this time of the year. They consistently bring bodies to the net. They crash, screen and throw pucks to the net. We can certainly learn lessons from that. We need to do the same thing.”

“It’s not easy to get there. You look at their second goal. You have two going to the net and it goes off a leg and into the net. That’s sometimes how you need to score if it’s a tough game. We need to bring that.”

“We have to look at every single game as we need the points. That’s all it comes down to, we need points. We need to find a way to get them. Some nights, that’s going to be eight goals for and some nights, it’s going to be one or two. We need to figure out how to win those closer ones because everybody plays extra hard this time of year.”

During the third period, Kings center Anze Kopitar was struck in his mouth by an accidental high stick by teammate Dustin Brown.

After the game, Kopitar was speaking to the local media when he was asked about the high stick, and if Brown had apologized.

“No, not yet,” said Kopitar, who then added, with his tongue planted rather firmly in his cheek, “I’m going to go kick the (expletive deleted) out of him.”

Here is the hilarious video of Kopitar having some fun with the local media (a Frozen Royalty exclusive):