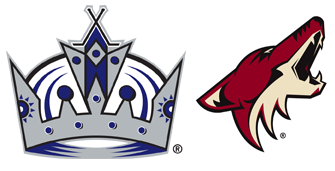 LOS ANGELES — Anze Kopitar and rookie Tyler Toffoli each scored a goal and added an assist, while Jonathan Quick stopped all 27 shots he faced, to lead the Los Angeles Kings to a 4-0 victory over the Phoenix Coyotes in front of a sell-out crowd of 18,118 fans at Staples Center in Los Angeles on March 18.

After the Coyotes had the best of the scoring chances early in the first period, Kings rookie defenseman Jake Muzzin opened the scoring on a shot from the top of the left circle at the 6:01 mark, with the Kings on the power play. Muzzin’s shot was deflected near the point of origin by Coyotes right wing David Moss, changing the direction of the shot.

Toffoli scored his first National Hockey League goal (and recorded his first NHL point), also on the power play, at 8:39 of the second period, roofing a rebound chance from just outside left crease.

The Kings broke the game wide open in the third period, with Kopitar scoring at the 6:22 mark on a wrist shot from the left circle. The shot was deflected by a Phoenix defenseman David Schelmko near the point of origin, changing the trajectory of the shot, fooling Coyotes goaltender Mike Smith.

Just 1:11 later, Jeff Carter scored from the right face-off dot, firing a laser into the top right corner of the net, a shot that chased Smith from the game, and closing out the scoring.

Toffoli assisted on Carter’s goal, earning his first NHL assist, and his first multi-point game in the NHL.

Smith made 18 saves, and was credited with the loss. Jason LaBarbera stopped seven shots in a mop-up effort.

Quick was sharp in goal for the Kings, earning his first shutout of the season, and the 25th of his NHL career.

Phoenix Head Coach Dave Tippett:
“We looked more desperate around the net. There was lots of push there. We got ourselves into some trouble taking a lot of penalties. They capitalized on it and that changed the outlook on the game. I’m more upset at giving them an early lead on power plays than our chances not going in.”

“We’ve just got to get some luck. There’s no time to get down now. We have to keep pushing forward and find some people to get the job done for us.”

(On pulling Mike Smith, whether it was about Mike or what was in front of the net): “A little of both. We have to come back tomorrow and be strong. We will figure out who goes tomorrow night. We are just trying to change momentum now.”

Phoenix Forward Shane Doan:
“Obviously we’ve got to be better. We have to get to the net and find a goal just bounce in and somehow find a way to generate some more offense. We thought we had some opportunities in the second and the third, we just didn’t bury them. We had a power play that I missed the net on a one-timer. You miss an opportunity like that, that’s a mistake. We can’t have those. I made it. It’s been happening too often.”

Phoenix Forward Raffi Torres:
“We are getting some opportunities. We’ve got to bear down around the net. You have to give their goalie some credit. He played pretty solid and didn’t give us much. We’ve got to do a better job of getting to him and getting pucks to the net.”

“We have to keep battling. It’s going to come. We have to capitalize on chances. I think I had a couple of good chances there. You just have to finish especially with the way things are going the way they are.”

“For tomorrow, we have to stay out of the box. We took three offensive [zone] penalties. You can’t give a team like that much time. They have a lot of firepower up there, and they showed it tonight. They played well all around.”

“Overall, we need to be better and worry about what we are doing. We have to keep getting pucks to the net. Hopefully, we can capitalize on the power play. We just have to keep our heads up here and have a pretty desperate game tomorrow.”

NOTE: Exclusive video of post-game interviews; not available on KingsVision/LAKings.com

Used with permission. All videos provided by KingsVision at LAKings.com, or NHL.com require Adobe Flash Player. As such, they are not viewable on iOS devices (iPhone, iPad, iPod Touch).