TRAINING CAMP: The big news from Day 2 of the Los Angeles Kings’ abbreviated training camp was that center Anze Kopitar skated after practice, and that forward Anthony Stewart has arrived in town, and skated with the team today. Includes raw audio interviews with Kopitar, Stewart, and head coach Darryl Sutter, along with a photo essay of the morning practice session.

EL SEGUNDO, CA — Perhaps the biggest story from the Los Angeles Kings training camp on January 14 was what happened after practice ended.

As the Kings dressing room was opened to the media after most of the players had left the ice, one player was just getting suited up, getting ready to go out onto the ice.

That player was none other than center Anze Kopitar, who suffered a knee injury in his last game with Mora in Sweden, before he returned to Los Angeles as the lockout ended.

“It felt good,” Kopitar said after the light skate. “I didn’t really know what to expect for my first skate, but it felt good. We’ll see how, day-by-day, that I progress, and how I feel on the ice.”

“There was a little bit of discomfort, but to be honest, I thought it would be worse than it was,” Kopitar added. “I didn’t go all out, right off the hop, but I wanted to get the turns in, and the crossovers. But I’m sure that if I skate normally, straightforward, even at the higher speed, I’m sure there isn’t going to be any pain.”

Kopitar was waiting for the arrival of a custom knee brace before he could test the knee.

“I was curious to explore the turns, and the pivots,” he noted. “I didn’t have any problems. It’ll be a little bit of a process [to get used to wearing a knee brace], but I don’t see it being too much of [an issue].”

“What do you want me to say? You talked to him before I did,” said Sutter, who was at least slightly annoyed. “Just so you know, that’s generally not the rule, right? You were very fortunate to be able to do it. Next time you won’t.”

After being traded to the Kings by the Carolina Hurricanes on January 13, as part of the deal that sent right wing Kevin Westgarth to Carolina, forward Anthony Stewart was already in camp, and on the Kings’ practice ice, just one day later.

Stewart said that he was happy to come to the Stanley Cup Champions.

“I was a little bit surprised [when he learned of the deal],” he said. “Whenever you get traded, you’re a bit surprised. But Carolina didn’t make the playoffs last year, and they have a lot of young guys coming up.”

“The [general manager] mentioned to me that six or seven guys from the minors are going to make the team, so, being one of the third or fourth line guys, I saw myself as being on the outside looking in,” he added. “But there’s no better team to come to than the Stanley Cup Champions, so I’m just ready for the opportunity.”

Stewart was at the Hurricanes practice rink, preparing for the first day of their training camp, when he received the news.

“I was in the rink, and got called up to the GM’s office,” said Stewart. “He said that there was a trade pending, but to hold tight, so I had to wait about 10-15 minutes, but then I was told that I was [going] to L.A.”

“It was a little bit of excitement and disappointment, at the same time, but I’m ecstatic to be here, and I’m happy to contribute,” added Stewart. “[The Kings play] a system that fits my strengths, being a big body who can skate, and they’re the Stanley Cup Champions, so I’m definitely happy to be here.”

Stewart has a reputation for being a physical player with a bit of speed.

“[I’m a] power forward,” he noted. “I like to play a lot along the wall, and I’ve got some speed to my game. I can beat a defenseman wide, and crash the net. This year, I’m looking to play more of a physical game. It’s a short season, and there’s not a lot of time to show what you can do. I’m looking to come out full force, and get the ball rolling.”

Although he is the new kid in town, Stewart is not in entirely unfamiliar territory.

“Some of the guys are very familiar with him,” said Sutter. “Mike Richards and Jeff Carter won the gold medal with him [in the 2005 World Junior Championship], and my brother, Brent, coached him on that team. He’s familiar with quite a few of our guys.”

“I know a bunch of the guys—I played World Juniors with [them],” said Stewart. “Richards and Carter, I know [Drew] Doughty from back in Toronto, I’ve played with [Colin] Fraser, and I know [Brad] Richardson, so it’s not like there’s a lot of strangers in the room. I know them from being around the league a couple of years, and from playing with [some of the] guys at different levels.”

Stewart has a brother playing in the NHL, Chris, who plays for the St. Louis Blues.

“I hear he didn’t have too warm a welcome in his last game here [Game 4 of the 2012 Western Conference Semifinals, in which the Kings completed a four-game sweep of the Blues],” Stewart said, chuckling. “We’re similar players. He’s a little bit more skilled, and has a little more brawn, but it’ll be good to be in the Western Conference. It’s a change of scenery for me, and I think it suits my game a little more. I’m really excited for the opportunity.”

Change of scenery or not, Stewart is going to have quite a dogfight for ice time, and maybe even a roster spot.

“I’m on the outside looking in right now [with the Kings, too],” he noted. “Whereever I can be used—I’m not here just to be a warm body. I want to be an impact player, get in the lineup as soon as possible, and show what I can do.”

“In Atlanta, I was just thrown into the fire, and was told, ‘go play your game,’ and that’s where I was most successful,” he added. “In Carolina, I was waiting for an opportunity. But now, I’m in a situation where I have to create my own opportunity. It’s almost like starting from square one, where, in every practice and every game, I have to stand out on every shift.”

“I think I had a good day today [in practice]. I’m just building up to getting into the lineup for Saturday, and going from there.”

“He’s competing with three or four other guys that everybody assumes are in the lineup for the same position,” Sutter noted. “But you can’t play’em all. You can only have a 23-man roster, and you can only dress 18 skaters.”

It might be long overdue that Frozen Royalty started to highlight more of the humorous comments made by head coach Darryl Sutter, almost daily, not to mention ones that might cause you to scratch your head a little. But here goes nothing…

After practice today, when asked for his thoughts about tonight’s open practice at Staples Center (7:00 PM; free, open to the public), Sutter remarked, “We’re so fortunate that we have to travel [to Downtown Los Angeles] to do two [practices] today. So fortunate.”

If you didn’t detect it, his comments weren’t just dripping with sarcasm. Rather, the sarcasm was gushing out so fast, it caused a massive flood, figuratively speaking.

69 photos by David Sheehan. ©2013 by David Sheehan. All rights reserved. Duplication, reproduction and re-distribution prohibted without permission. Click on any thumbnail to view a larger image, and to be able to scroll through the gallery. 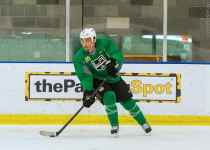 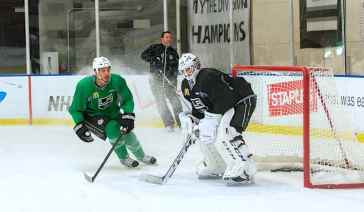 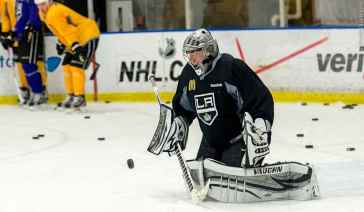 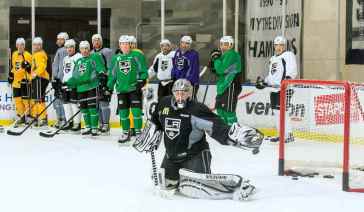 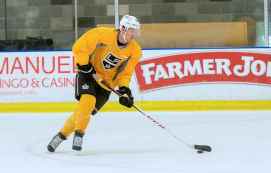 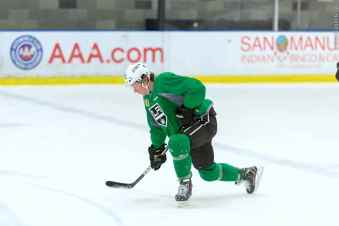 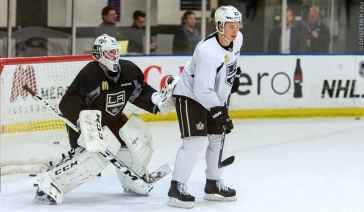 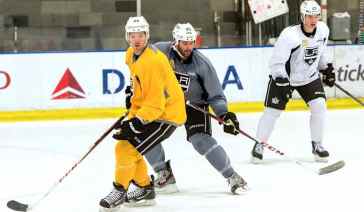 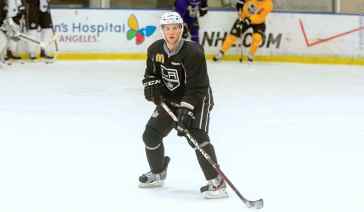 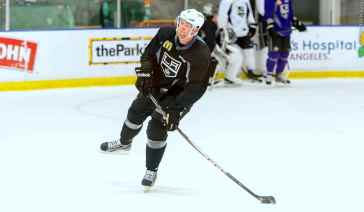 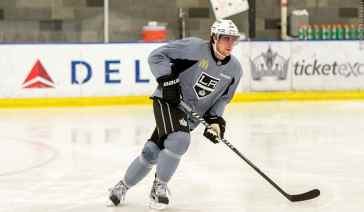 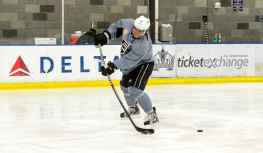 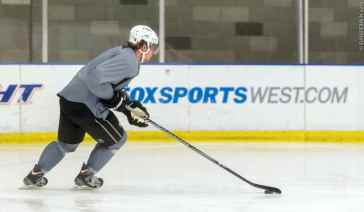 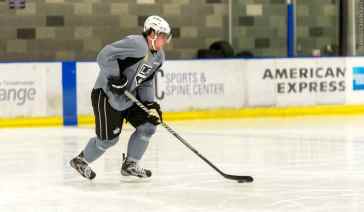