PRE-TRAINING CAMP: Los Angeles Kings goaltender Jonathan Quick said he has been cleared to return to action, and he talked about the back injury he suffered in the final weeks of the 2011-12 regular season, the surgery he had to correct the problem, and his recovery. Also includes audio interviews and a photo gallery from the January 8 informal skate.

EL SEGUNDO, CA — As the National Hockey League lockout finally begins to fizzle out, with ratification of the new Collective Bargaining Agreement (CBA) by NHL owners and players expected to be completed sometime this weekend, players throughout the league are making their way back to their teams, and are getting out on the ice as quickly as possible, even though, technically, the lockout continues.

Also joining the workout was former Kings and Anaheim Ducks winger George Parros, who is now with the Florida Panthers, and Buffalo Sabres goalie Ryan Miller. Both live in Southern California during the off-season.

By far, the most notable player on the ice was Kings goaltender Jonathan Quick, who made his first appearance on the ice at the Toyota Sports Center since the 2012 Stanley Cup Final.

Quick spent the summer, and the last few months, recovering from back surgery, and following the informal skate, he told reporters that he began to experience back problems prior to the end of the 2011-12 regular season.

“I had issues towards the end of the regular season, around the end of March,” he said. “Mid-March, maybe.”

Quick explained that the pain was not severe enough to impact his play.

“We thought it was one thing, but it kept acting up, so I saw a doctor, and it was properly diagnosed,” said Quick. “But it was manageable. When I was on the ice, that was when I had the least amount of pain. But when I had to sit on a plane, or get into a car, driving to the rink, driving home, sitting down for dinner…but when I was playing, that was when I was in the least amount of pain. You have to be very aware of what you’re doing away from the rink. That’s all it was.”

“[The surgical procedure he had] was a microdisectomy,” Quick explained. “[I had] a herniated disc, and it was pinching my sciatic nerve. I tried to rehab it, because there was a chance that I didn’t need back surgery.”

“I tried to rehab it for about a month, hoping it would heal,” Quick elaborated. “But it ended up developing a cyst, so at that point, [it was time to have the surgery]. So they went in, chopped it off, and cleaned up the inflammation around the nerve.”

“I was walking the next day—not strolling around—and I could get to the [refrigerator] and back,” he noted. “The toughest part was getting in and out of bed. My wife was helping me for a bit. Trying to put my socks on—I needed her help for that, too.”

“It took about two months of rehab,” he added. “Then, you start slowly working out, trying to get your fitness level up. Then, you get on the ice.”

Under the circumstances, the lockout turned out to be a blessing in disguise for Quick, and maybe for the Kings, too, at least in this particular case.

“Yesterday, I went to the doctor, and got [medical clearance],” added Quick. “He said I was 100 percent, and I feel great. This is the best I’ve felt since last February. There’s no pain.”

Quick spent a couple of months during the lockout working out with the Kings’ primary minor league affiliate, the Manchester Monarchs of the American Hockey League.

“I [had been] skating in Manchester for almost two months,” he said. “I went there, and had a team to practice with. I was fortunate that they let me jump in on their practice for two months.”

During the informal skate, Quick appeared to be no worse for the wear.

“He looks great,” said Lewis. “It’s nice to see some of those cross-crease saves he always makes—he robbed me a couple of times out there. It was good to see him back out there.”

Lewis joined his teammates for the first time since he went back home to play for the Utah Grizzlies of the ECHL.

“I was looking at my options,” he explained. “After Christmas, it was time to start playing, and getting in shape again. [Utah] was the best fit, and luckily, I was only there for a [short] time.”

“I was out here for most of the lockout, but after Christmas, I went home, and got a couple of games in,” he elaborated. “I timed it pretty good, to get in shape a little bit again, but I’m just glad to be back here.”

“It feels great [to be back]. You can feel the intensity start to pick up now. Everybody’s getting ready to go. It’s good to be back around the guys.”

Lewis indicated that playing for the Grizzlies was a plus for his conditioning.

“It’s definitely a different game down there,” said Lewis. “[ECHL teams] only play three lines, so you definitely play a lot. You have to pick your spots—when to go hard. I definitely got into shape. I played in six games in nine days, so I should be ready to go.”

But before making the move to play for the Grizzlies, Lewis was biding his time, like so many other NHL players.

“I just tried to stay busy,” he indicated. “I was out here skating and working out. I definitely got bored a lot, but I tried to do stuff, like golf.”

Stoll echoed Lewis’ sentiments about getting everyone back on the ice, and getting the season started.

“It’s a great feeling, it was a great text to get,” Stoll said about hearing that an accord on a framework for a new CBA had been reached. “Now, to get everyone back together, practicing for meaningful games—it’s what we all play for, it’s what we love to do. Especially [given] the way things ended last year, we want to get back at it, and see if we can get back to that form quickly.”

Stoll indicated that even though the journey towards a new CBA was unbearably long, with much of it seeming to be a big waste of time, it was a necessary evil, in many ways.

“I think [it was a process that both sides had to go through],” said Stoll. “It’s tough to say it that way. I wish things would’ve happened a lot sooner, but they didn’t. You can’t really go back on it now, and speculate on, ‘what would’ve happened if…’”

“We are where we are,” added Stoll. “We’ve just got to deal with it, and make the best of it. It is [frustrating], but at the same time, looking back on it now, I hope a lot of good things come out of this. Only time will tell, we’ll see what happens. But both sides had to make their stands, and get things in the deal they felt were important. I think both sides did.”

“It’s very tough to lose that much of the season. We’ve got to work hard to [earn] back the support, the fans, and get back the excitement that we gained [over] the last seven years since the last lockout.”

If the Kings want to get that excitement back, a fast start to the new season would seem to be a top priority, especially given that the 2012-13 season is likely to be just 48 games in length.

“We have to start big,” Lewis stressed. “It’s a quick sprint to the finish. You’ve got to be good every night. Hopefully, we can carry the momentum we built at the end of last season into this season.”

Stoll indicated that conditioning will play a magnified role in a shortened season, and that players will have to accelerate the pace of getting themselves into game shape.

The Kings might just have an Ace in the hole heading into the shortened 2012-13 season.

“I don’t know what to expect with a shortened season,” said Quick, who noted that head coach Darryl Sutter was coaching in Chicago during the shortened season following the 1994 lockout. “Hopefully, he’ll have a little insight on how to approach it. I think we’re going to look forward to what he has to say about it.”

Because he was recovering from his back injury/surgery until now, unlike his fellow locked out NHL brethren, Quick continued to receive a paycheck.

Whatever you do, don’t think for a second his teammates aren’t aware of that fact.

“There’s going to be a few dinners,” Quick noted, with a bit of a grin. “I think I owe [his teammates] a few.”

Photos by David Sheehan. ©2013 David Sheehan. All rights reserved. Duplication prohibited without explicit permission. Click on any photo to view a larger image, and to be able to scroll through the photos. 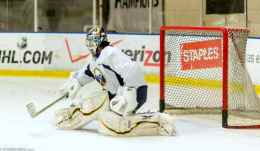 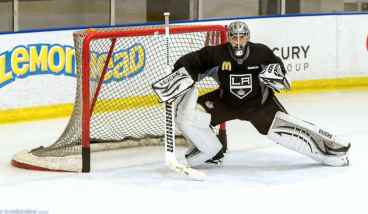 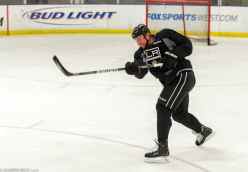 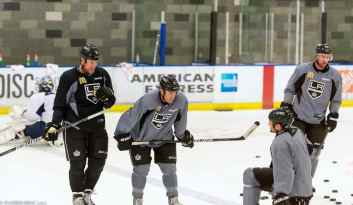 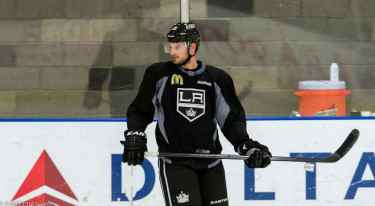 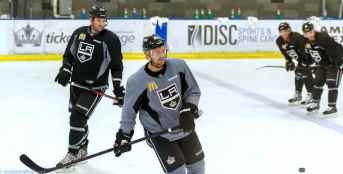 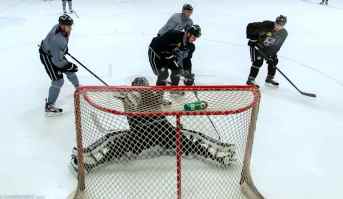 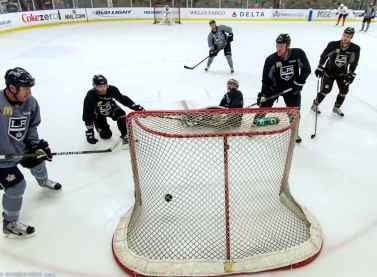 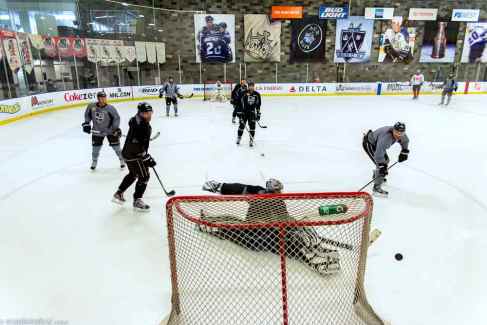 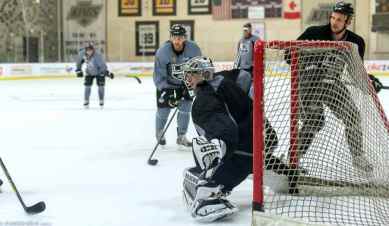 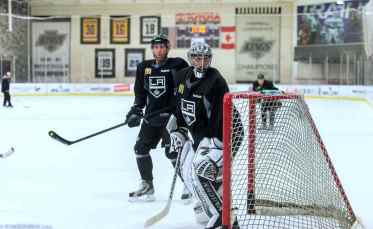 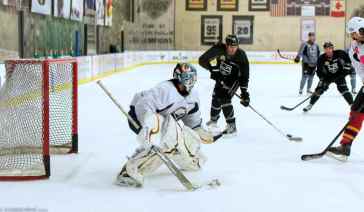 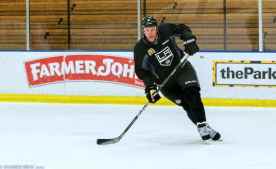 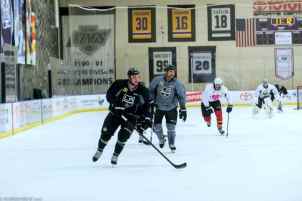