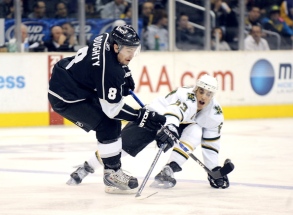 LAS VEGAS, NV — On June 18, the National Hockey League announced that Los Angeles Kings defenseman Drew Doughty was named to the NHL’s All-Rookie Team for the 2008-09 season during the league’s annual awards celebration.

Doughty, 19, scored six goals and added 21 assists for 27 points in 81 games this past season. He led the Kings in ice time, averaging 23:49 per game, which also led all NHL rookies.

Doughty, who was selected by the Kings in the first round (second overall) in the 2008 NHL Entry Draft, was named as the Kings Outstanding Defenseman and Best Newcomer.

The NHL All-Rookie Team is chosen by the Professional Hockey Writers’ Association from the best rookies in the NHL at each position for the season based on their performance that year.  The team consists of one goalie, two defensemen and three forwards and has been selected every year since the 1982–83 NHL season.